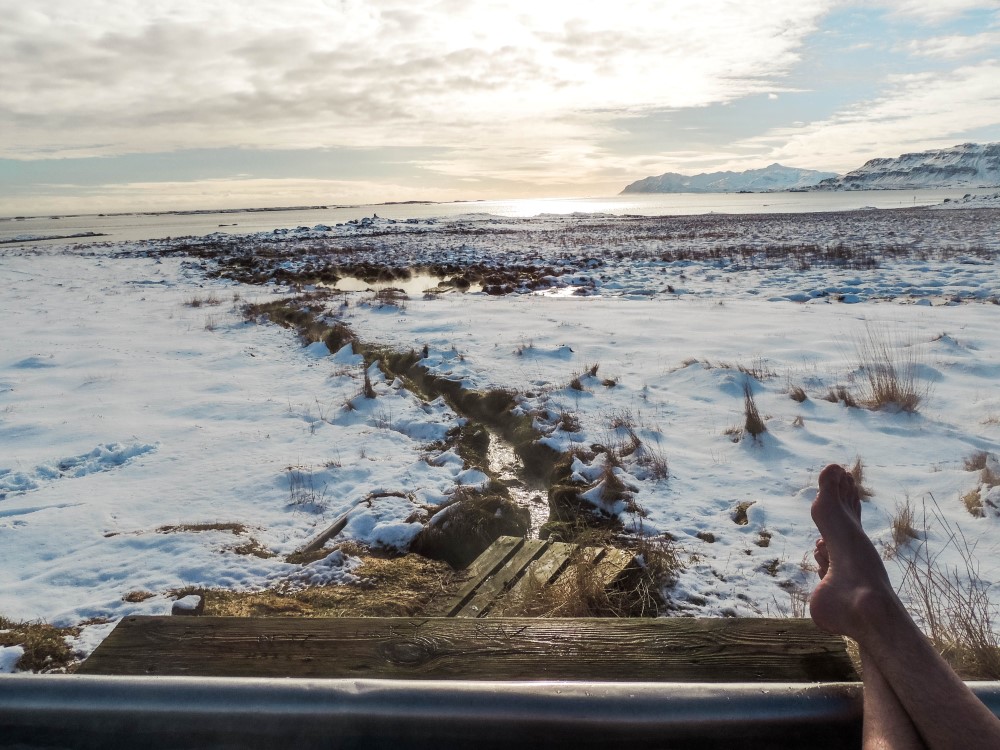 Taking your clothes off in minus five-degree weather is one of the more counter-intuitive activities. You really have to override your brain, which kicks up a rousing chorus of, “You’re probably going to lose your feet.”

But stepping (quickly) from snow-covered ground into a pool of geothermally heated, bath-temperature water, replaces that refrain with something akin to the Star Wars theme tune.

Towards the end of our Iceland trip we felt like connoisseurs of these “hot pots”. They’re not always easy to find. We tracked the first one down after spotting it using my new favourite travel hack: check the location tag on Instagram before setting off each day to see what’s on your route. And then, if the point of interest is a bit obscure, use the satellite view on Google Maps to pinpoint the location. 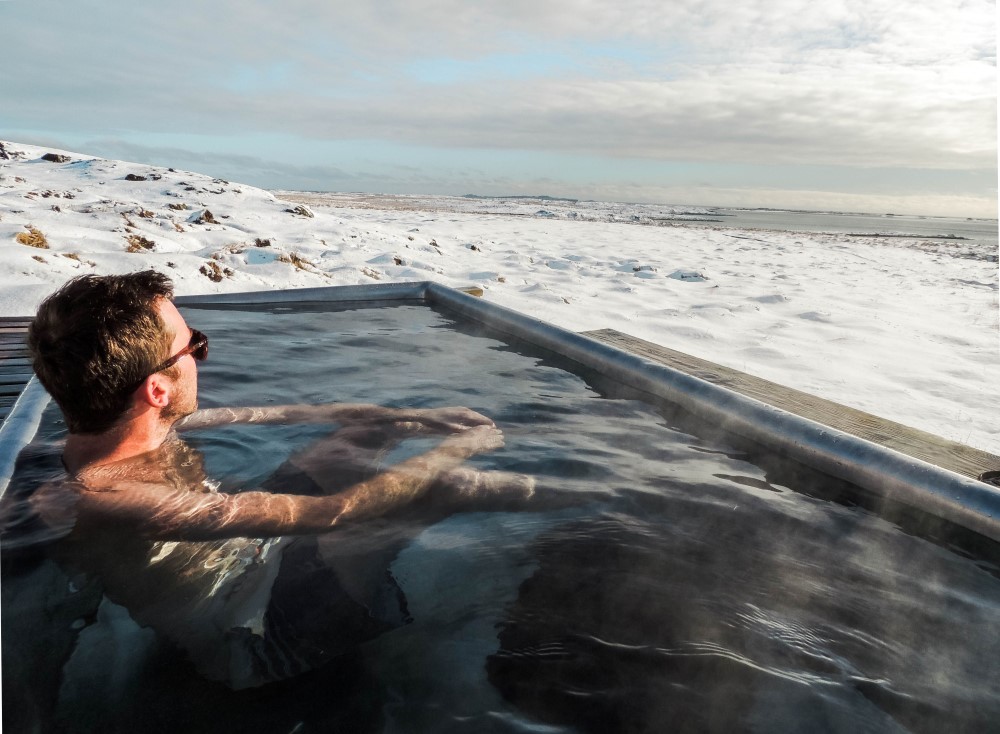 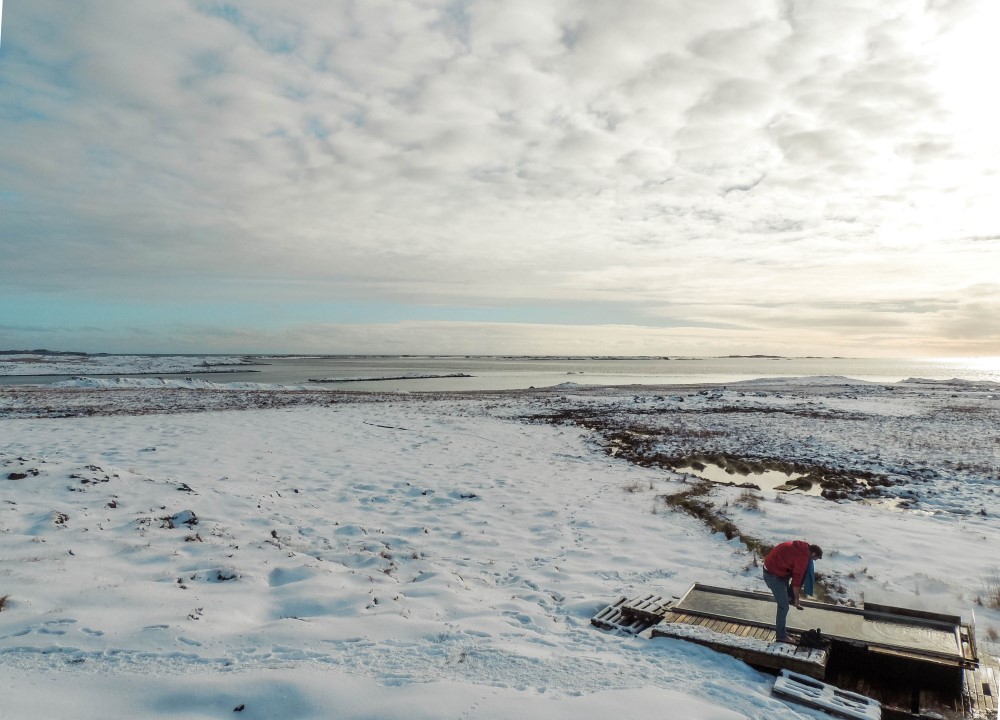 Having almost closed the circle in our journey around the ring road, we’d spent quite a few blissful hours in a variety of hot pots – always the only people around, which turned out to be one of the many benefits of travelling Iceland in winter. And now we were in pursuit of The One I’d been dreaming of – a completely natural hot pot, rather than a man-made tub heated naturally – which sat on the property of our accommodation in Heydalur, a lovely, somewhat strange, remote place, with a sticky-locked door only Joe seemed to be able to open.

This hot pot was the main reason we chose to drive so far north to stay there. But it was proving tricky to get to.

As the sun set, we followed a sketchy map that told us we had to cross a river, but there were no clear stepping stones, and certainly no bridge. It’s not exactly tempting to wade through water in freezing temperatures. 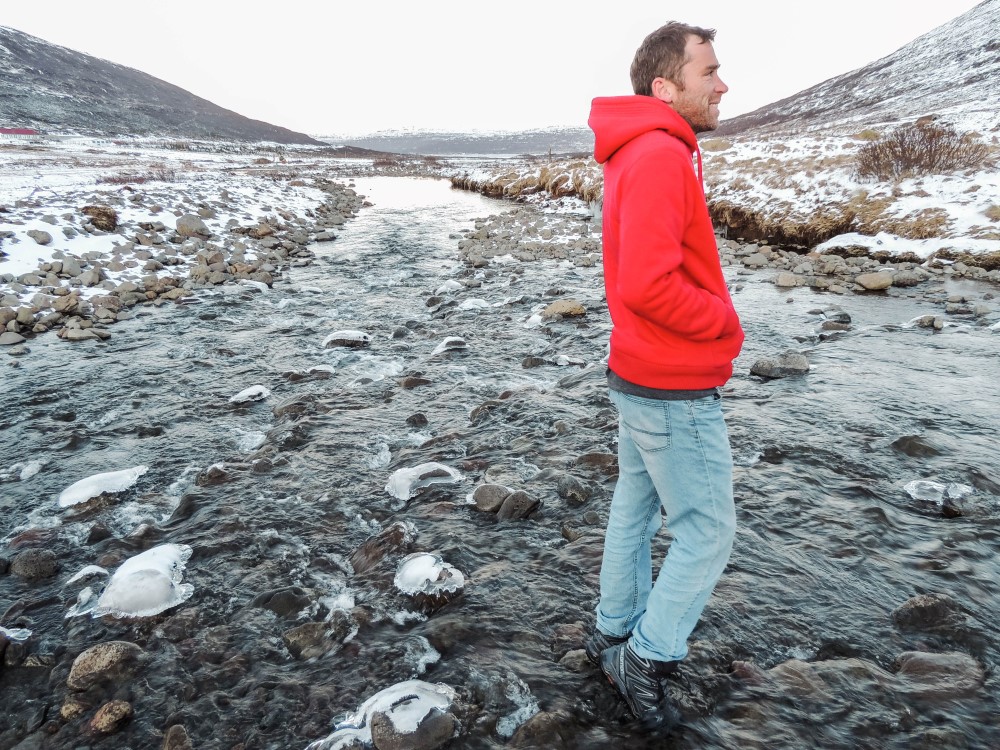 Anxious to try and find the hot pot before it got dark, I wasn’t in the mood to indulge Joe’s favourite pastime in Iceland – throwing rocks into frozen ponds and rivers to break the ice. He was really enjoying the challenge of a particularly thick piece of ice, which required large rocks to be thrown quite high into the air to make an impact. I was enjoying it less, as, with an eye on the setting sun I scanned the river looking for a likely path across.

Next thing I knew Joe was running towards me, eyes wide with fear, glancing at me, and then the sky, me, then the sky, shouting, “Watch out, watch out!”

I looked up to see a large rock careening towards my face. It happened so fast I wasn’t sure whether to run or stand still, as Joe lurched towards me.

It just missed me.

The silence echoed around us for a few moments.

Oooooooh, I was cross.

The search for a place to cross the river resumed in rather tense silence, resulting in us eventually wading across a shallower section further upriver, and then struggling across snow and ice-filled ditches back downriver as the sun disappeared but a pink glow remained. 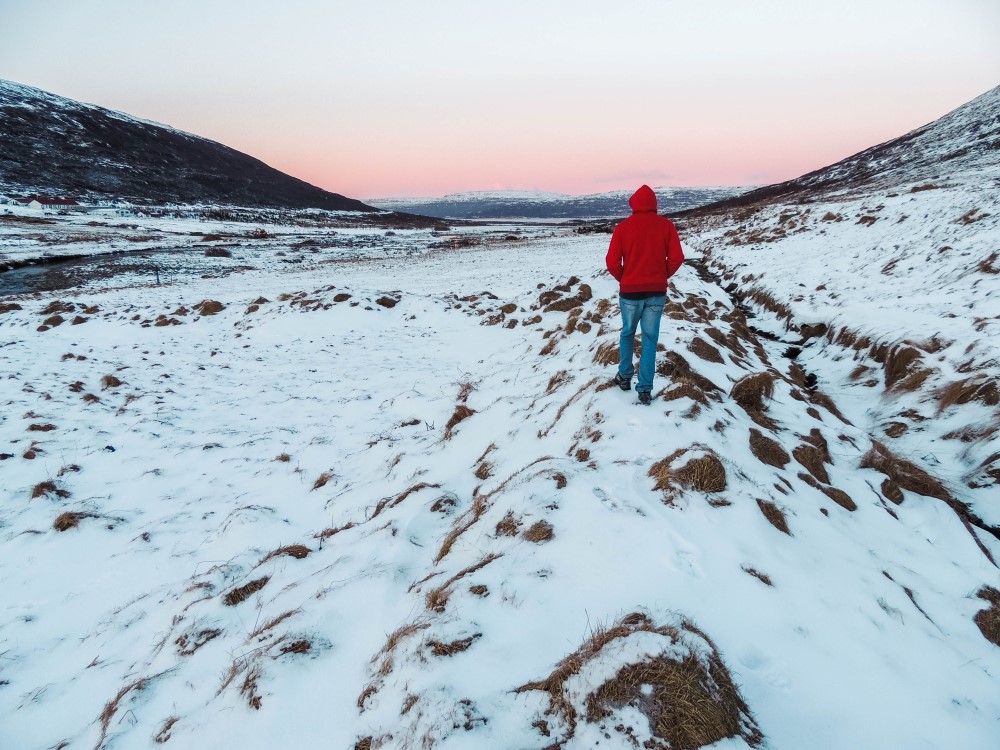 And then we found it.

It was beautiful – a little natural pool, surrounded by snow, with steam gently rising off it.

As I began removing my many layers, Joe decided to return to the river to Hansel-and-Gretel us an easier path back across, as at this point, we would be returning in the dark.

Sinking into the blissfully warm water, and watching Joe in the distance stacking boulders and creating elaborate markings in the snow (which, when viewed close-up later, I found to be interestingly reminiscent of the inked sketches we’d seen earlier that day in the Museum of Witchcraft and Sorcery), I felt a lot less angry. As he made his way back to the hot pot, I poured us a forgiveness-whisky, with a compressed handful of fresh snow (incidentally, the very best way to drink whisky). 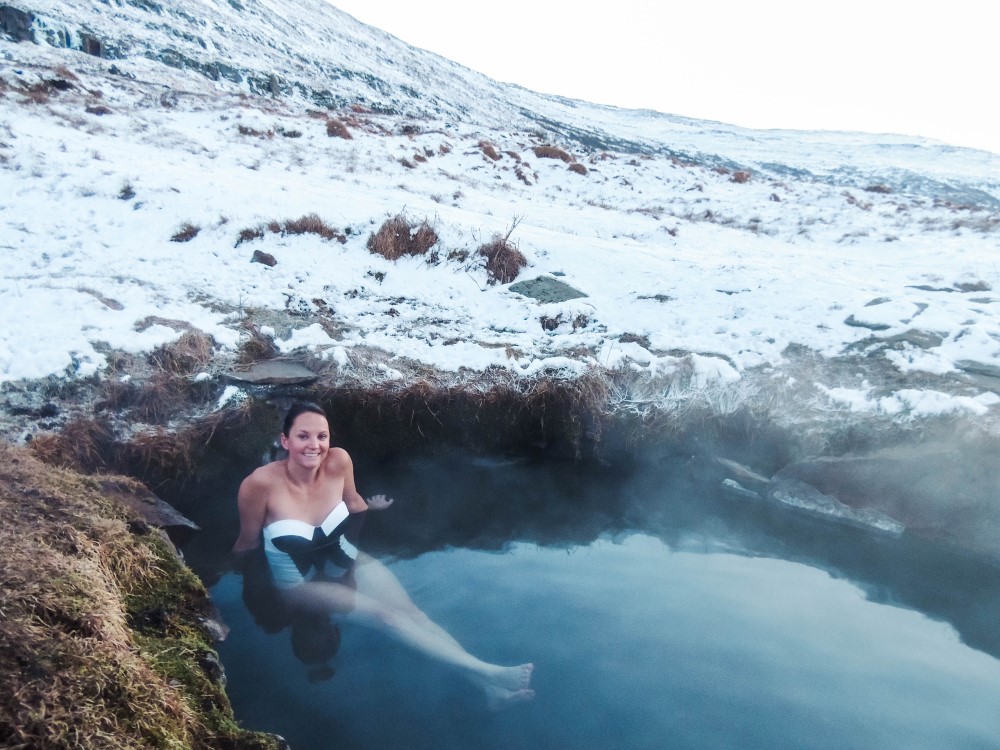 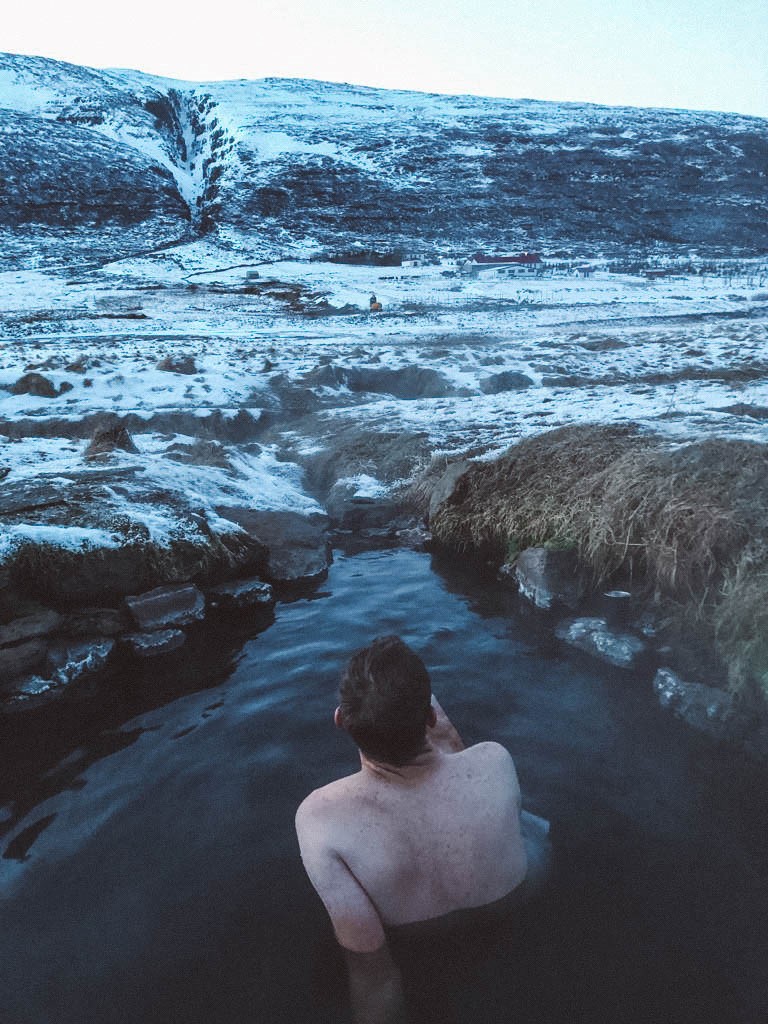 We sat in that miraculous pond, watching the pink glow fade and the stars come out, astonishingly bright in that out-of-the-way place: Orion, disconcertingly upright in the northern hemisphere; satellites skating slowly across the sky; a shooting star gone in a second. And then, a dancing band of green light, patterns shifting and reforming, like endless cappuccino artwork by a cosmic barista.

I have never been so conscious of how tiny I am in the grander scheme of things.

Someone once said to me, years ago, that when you think about meeting the person you choose to be with, you envision this grand, sweeping love story. Which, of course, is part of it. But the overwhelming feeling, when you find the right person, is one of contentment.

Until this moment, I had always thought that contentment was a bit of a beige feeling. Not unlike the word “nice”. But I had it wrong. Pure contentment is one of the biggest feelings there is. And in that hot pot, under the Northern Lights, warmed by whisky, with a frozen ponytail and wrinkled fingers, I felt utterly overwhelmed by it.

It was 1am when we finally stood up (slowly) and got dressed (speedily), and made our way back across the frozen river, this time much more smoothly.

Crunching through the snow in the dark, all I could think about was a warm shower and the two-minute noodles I was going to devour. We got to the door of our room, which, with frozen fingers, I still couldn’t open.

I passed the key to Joe, hopping from foot to foot, breathing clouds of steam.

He put the key into the lock, turned to me with a smile and said, “Who’s got the spirit?” 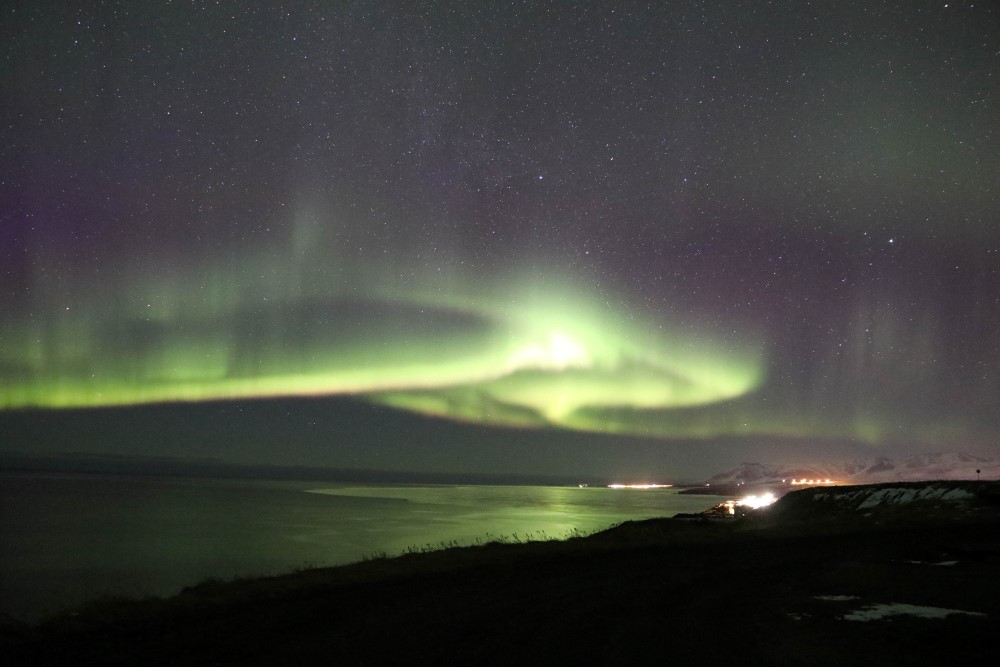 We were lucky enough to see the Northern Lights three times on our trip (amazing, considering that seeing them at all is not a guarantee). All three times we were the only people around. (Joe’s photo) 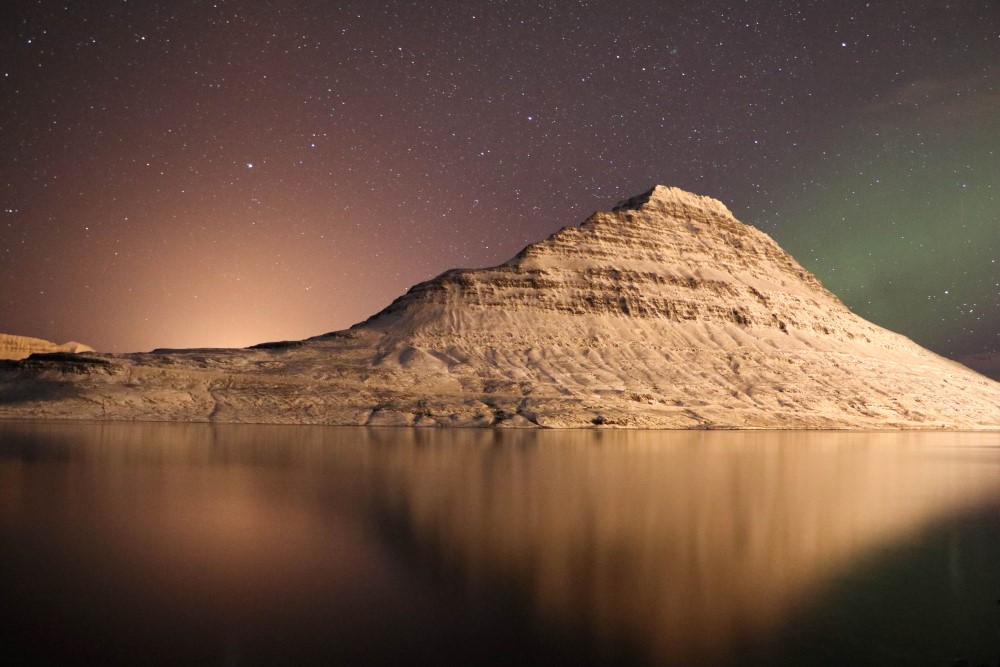 Joe’s photo from Eskifjörður, earlier in the trip – and one of my favourites. 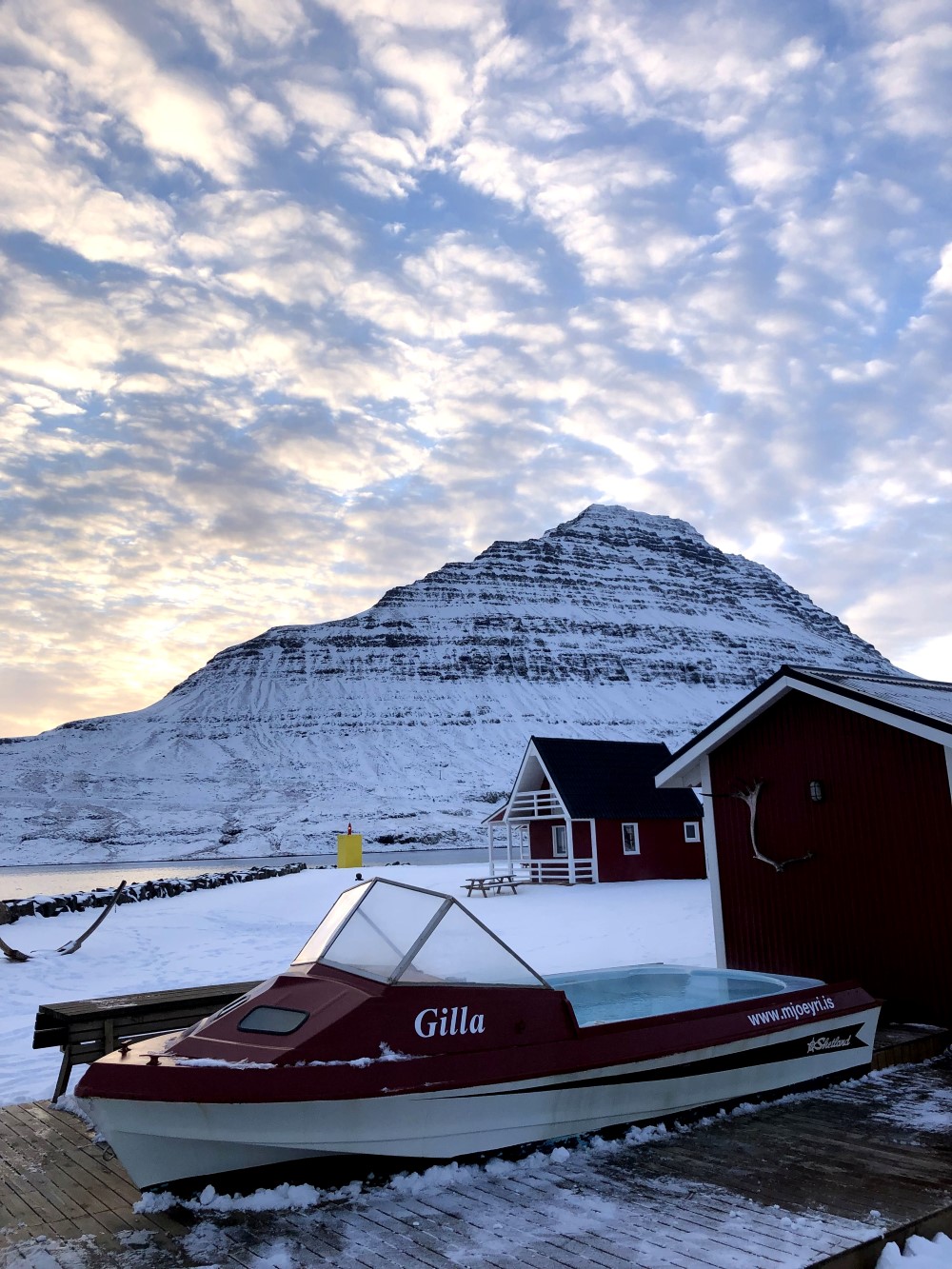 At Mjoeyri in Eskifjörður, they had converted an old boat into a hot pot. 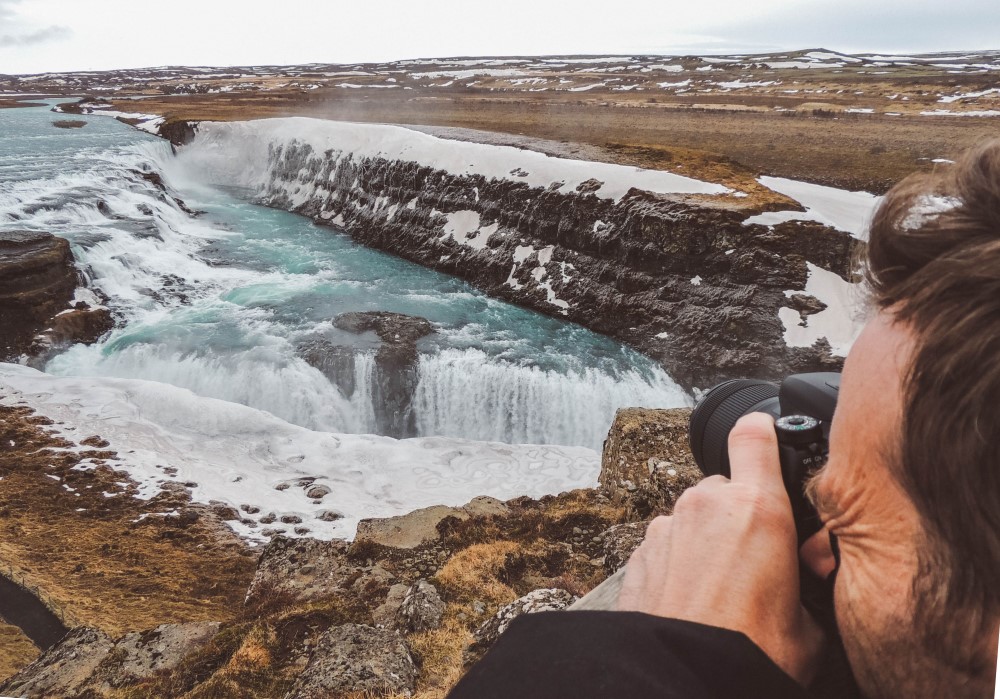 Gullfoss. We saw almost as many waterfalls as we did hot pots 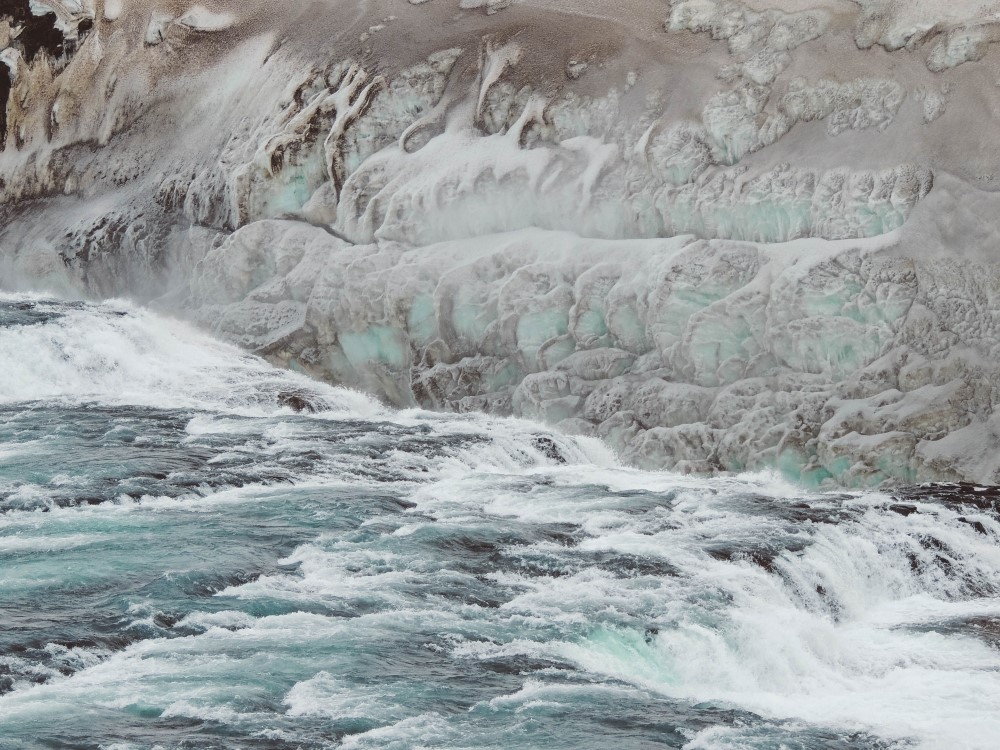 Ice wall above, waterfall below 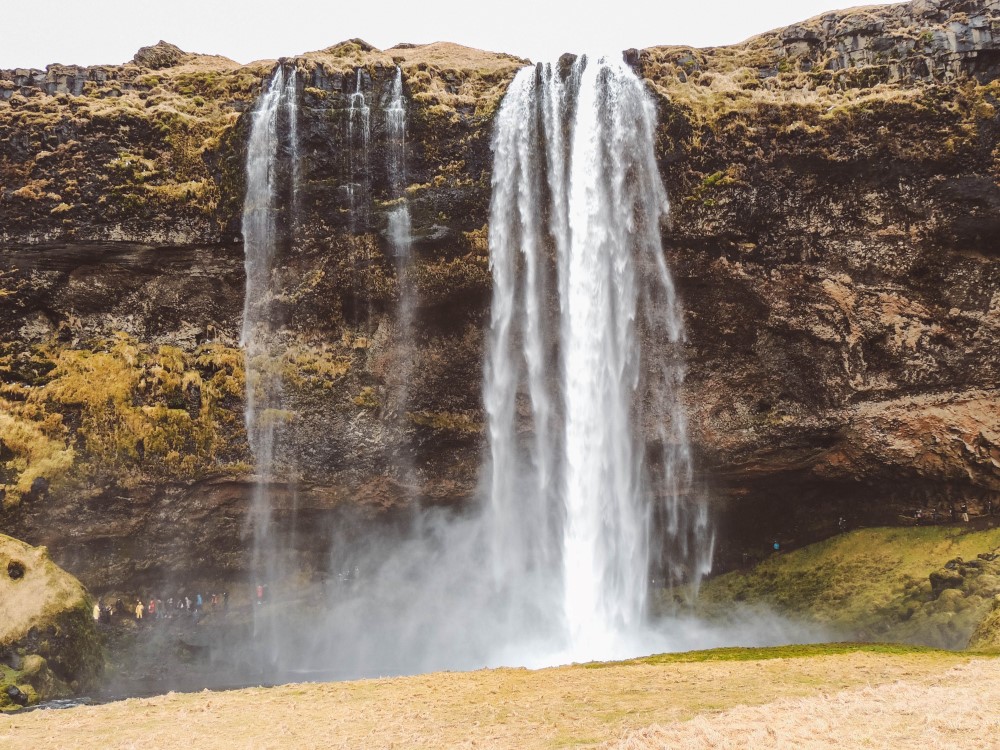 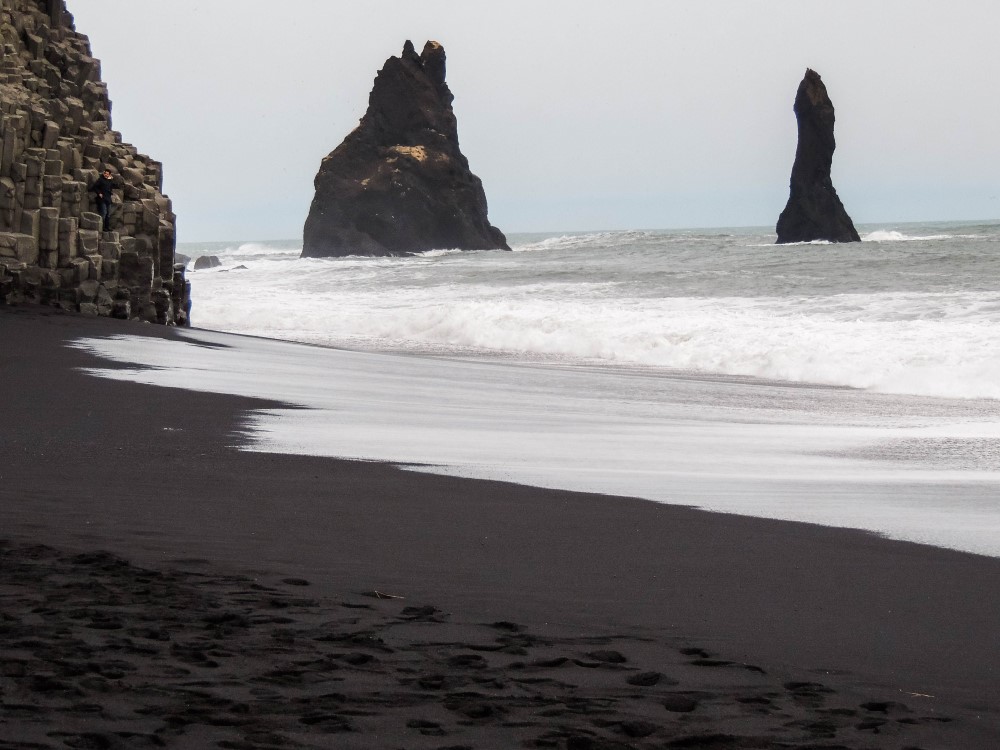 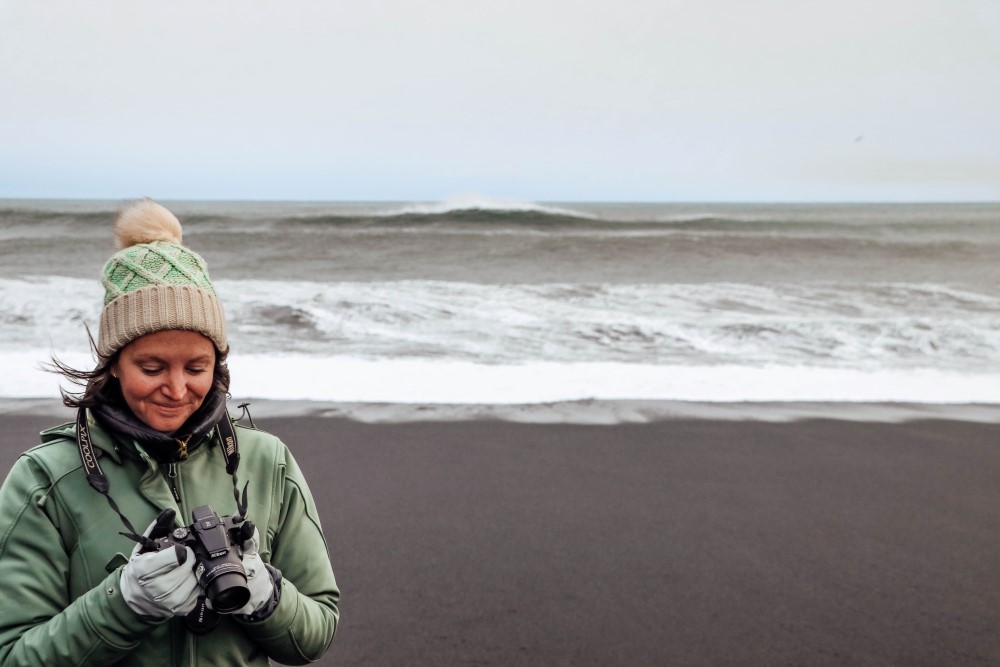 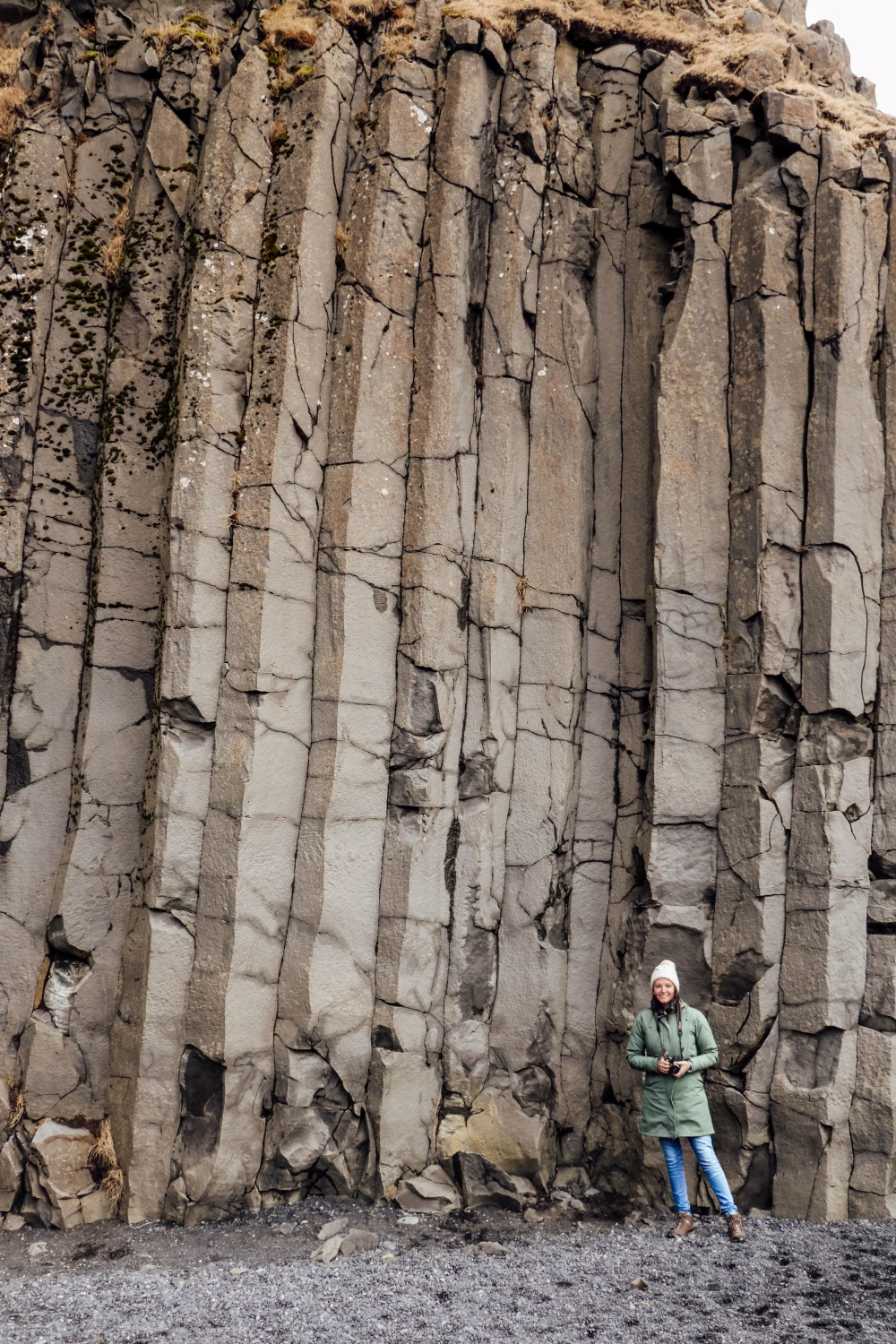 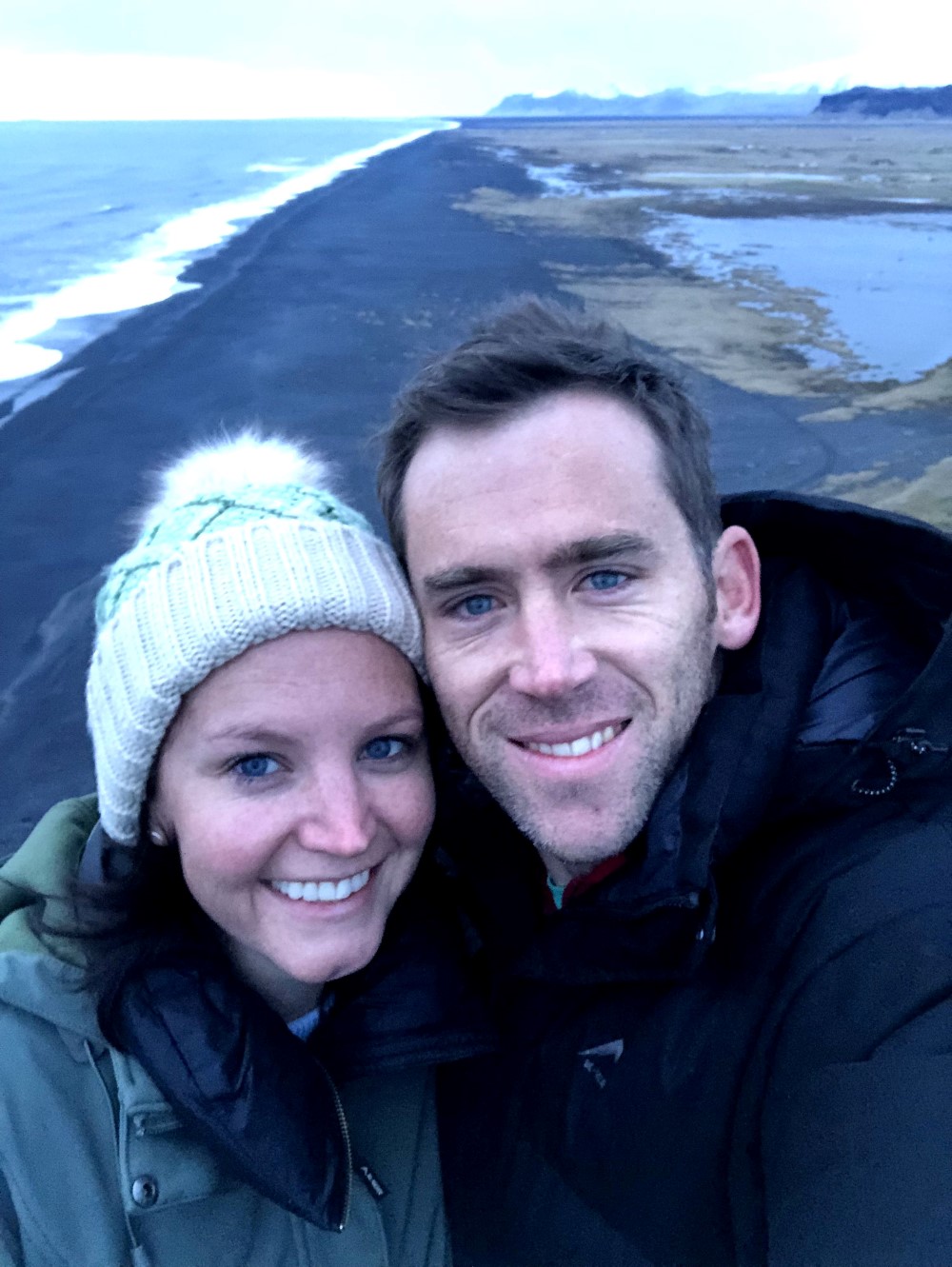 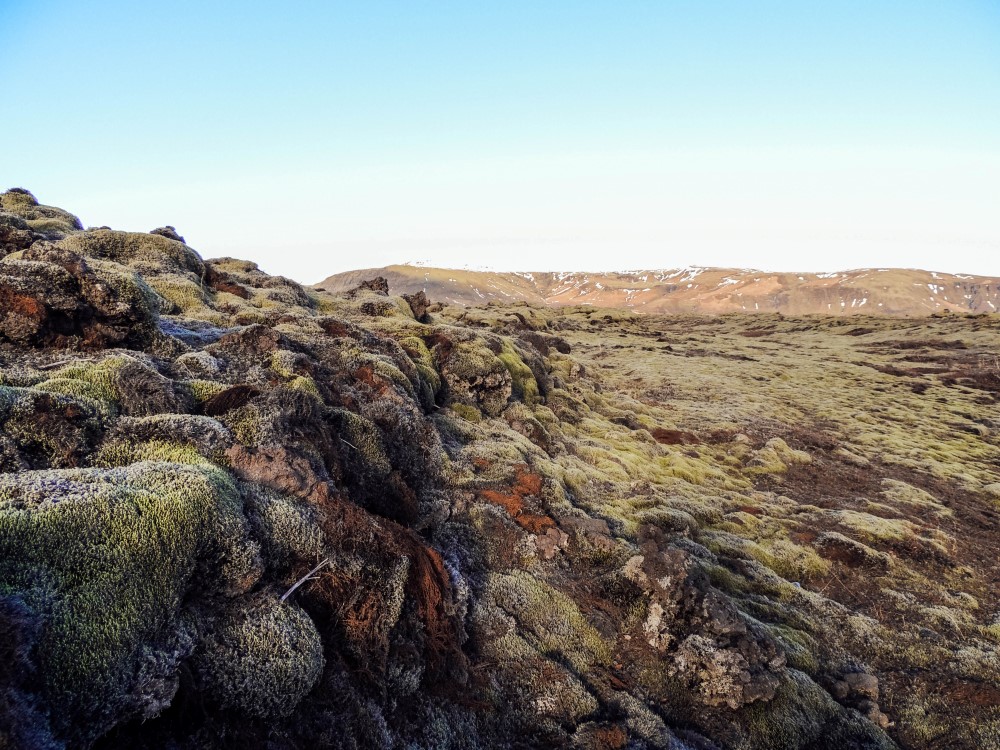 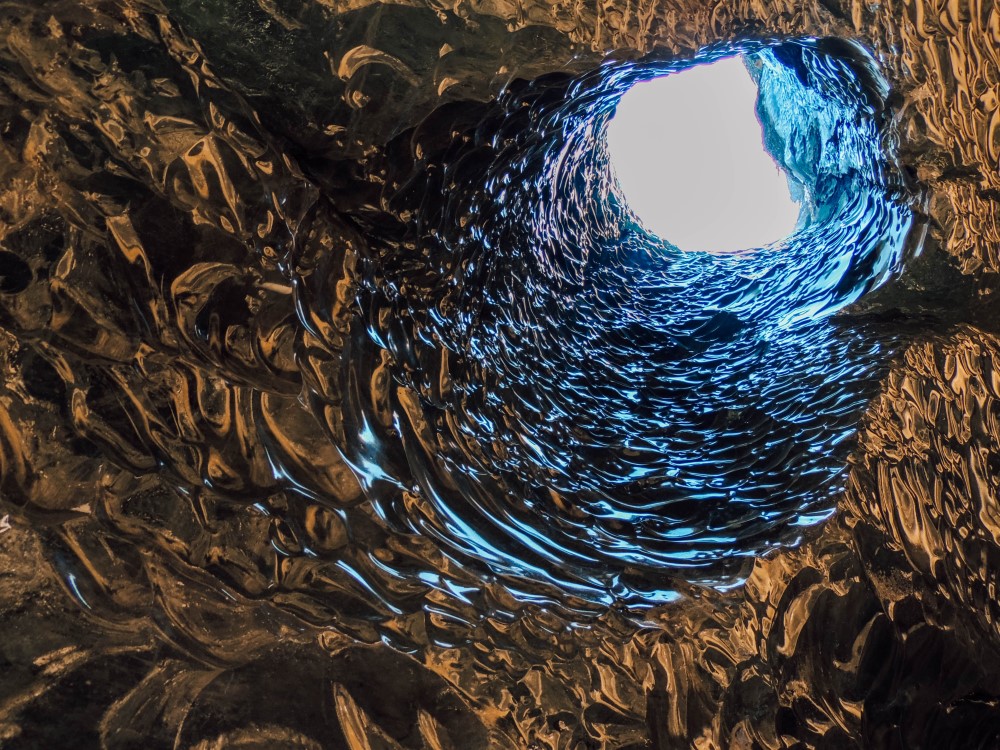 Inside an ice cave on the largest glacier in Europe 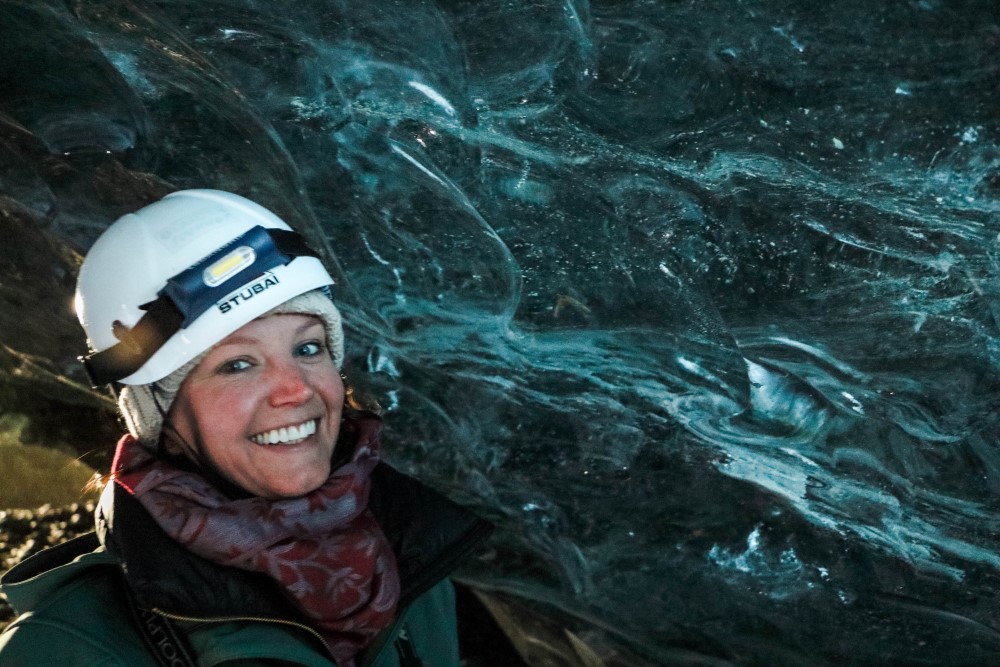 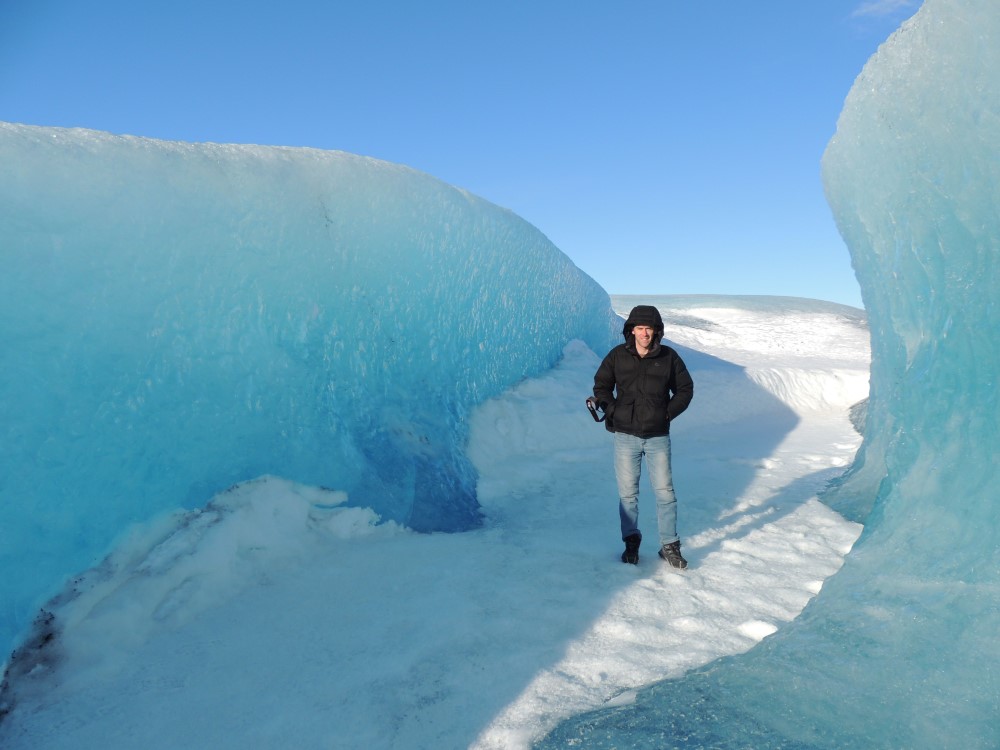 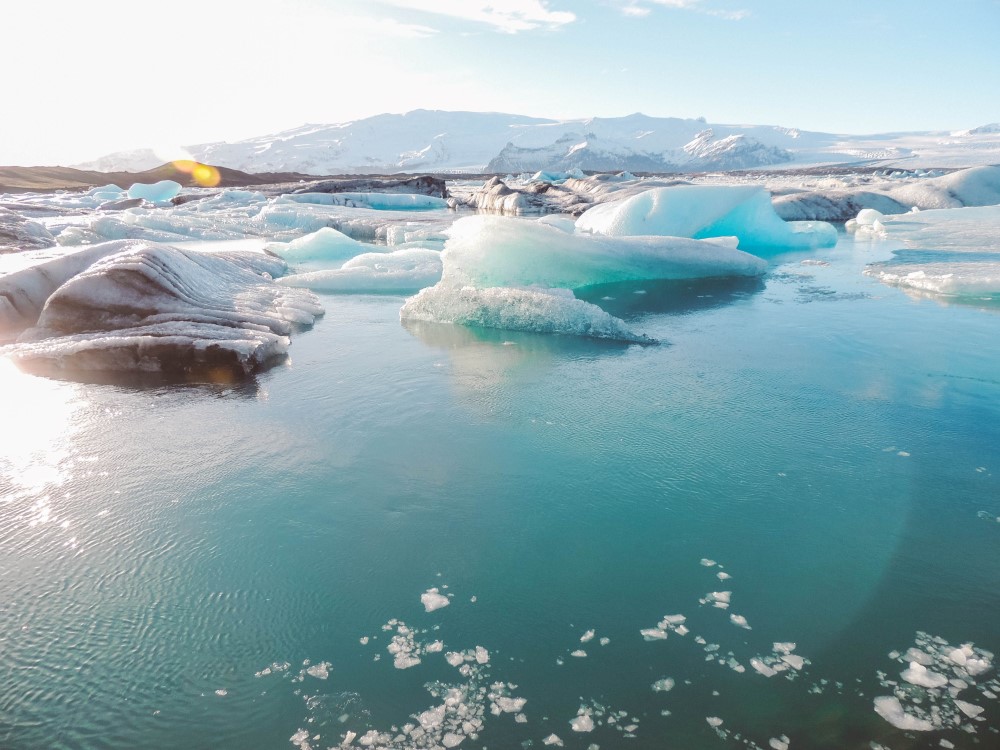 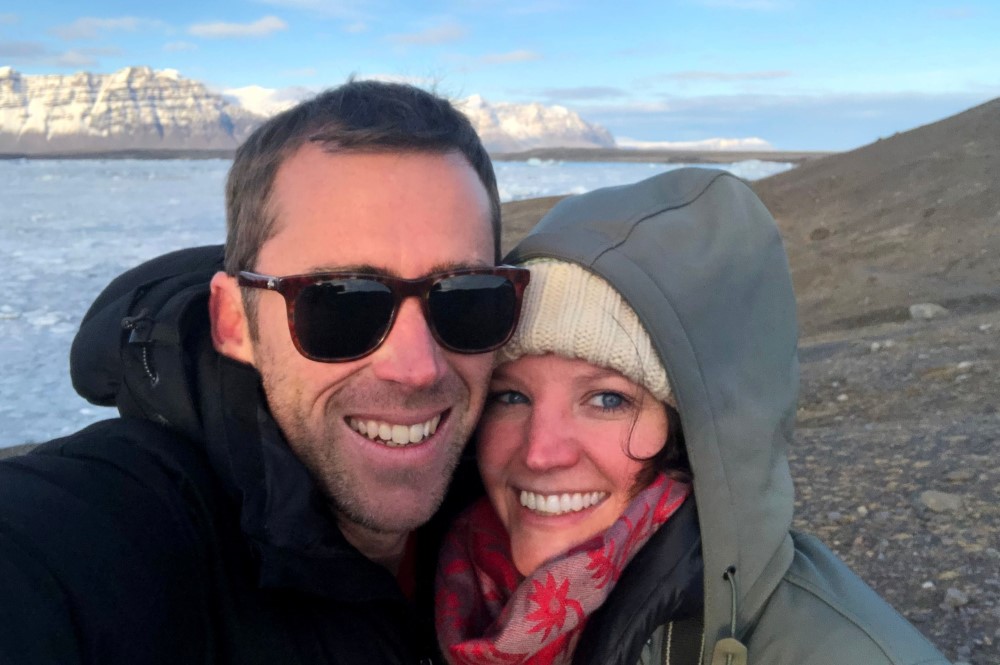 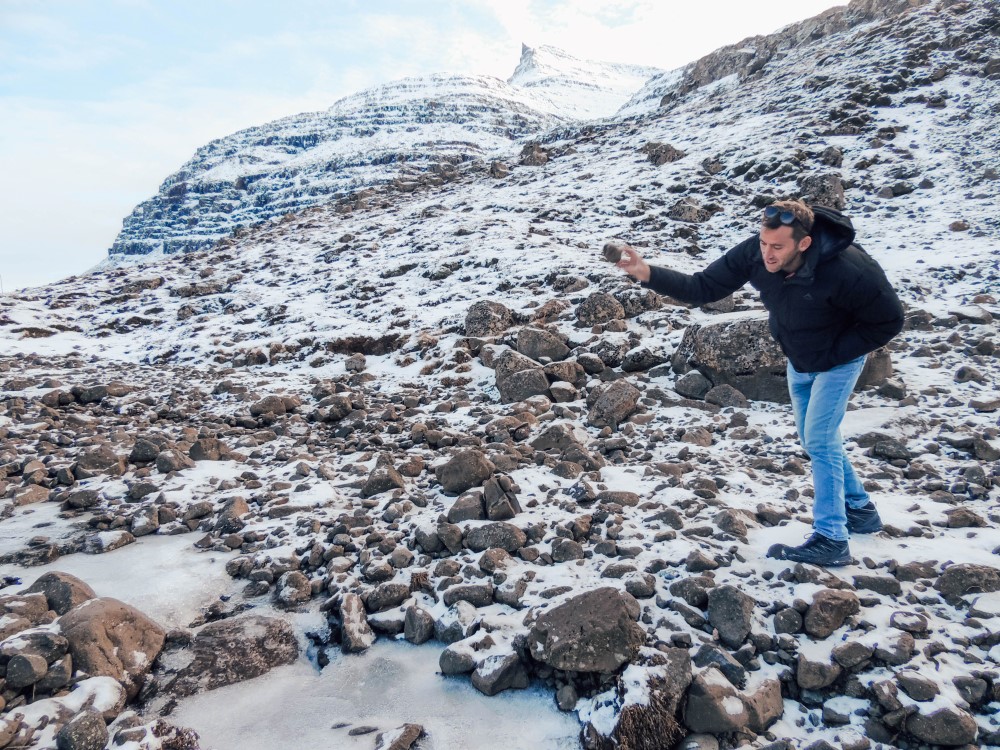 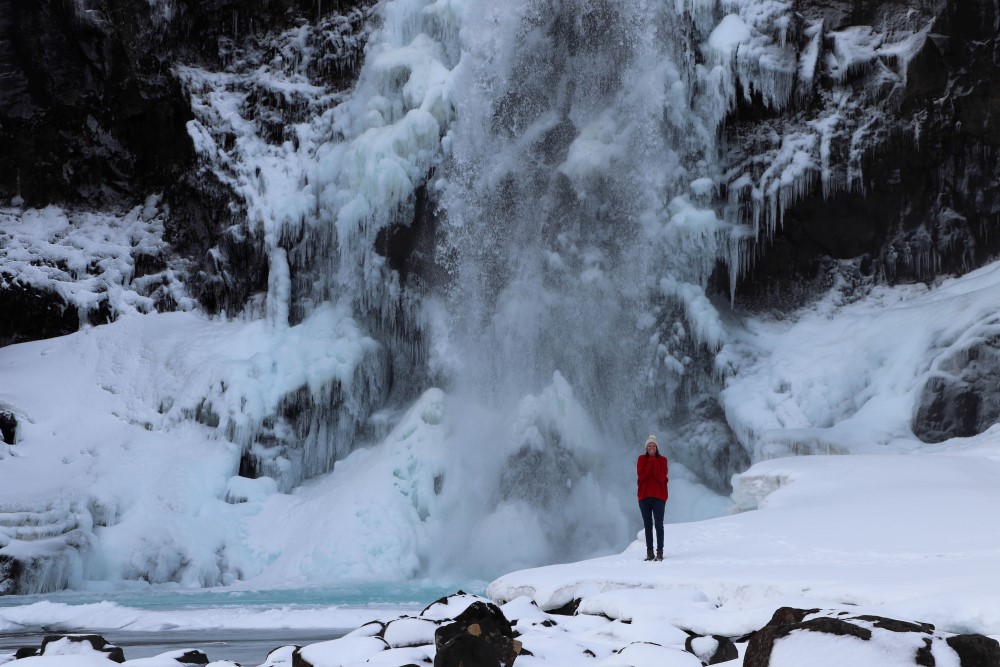 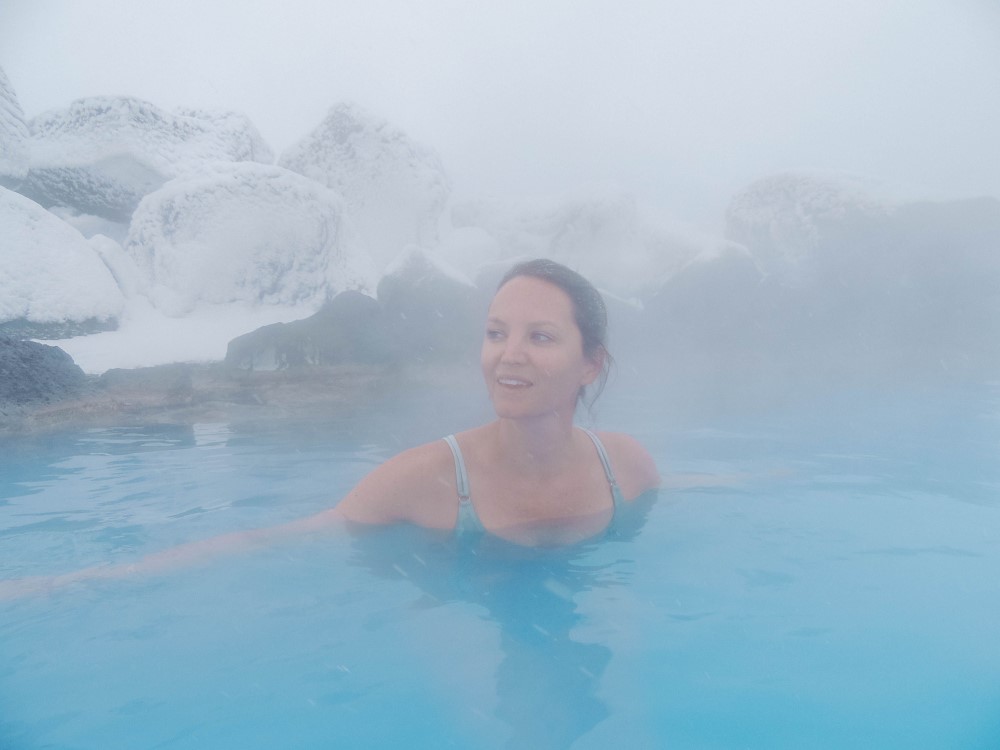 Myvatn Nature Baths in the snow 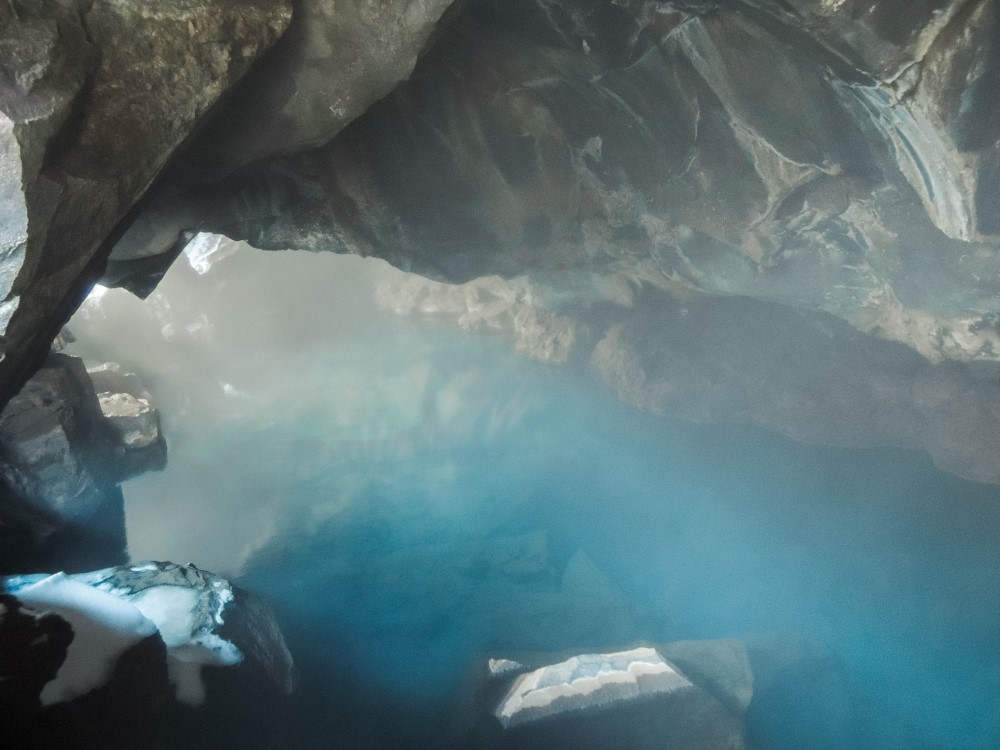 Grjótagjá , “the cave” from Game of Thrones 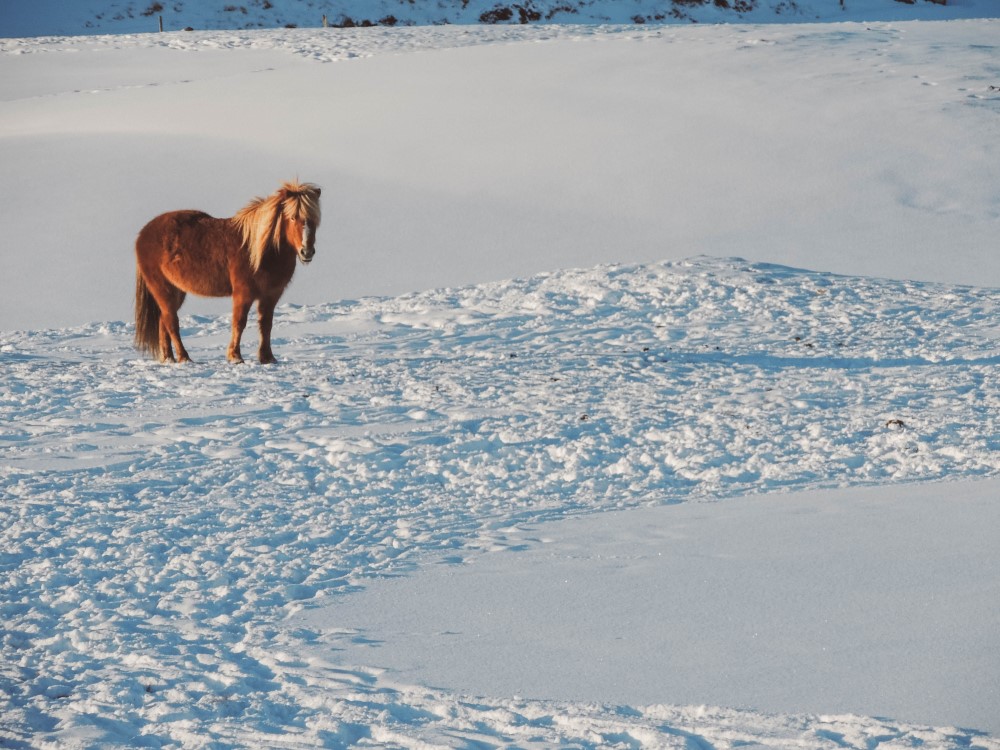 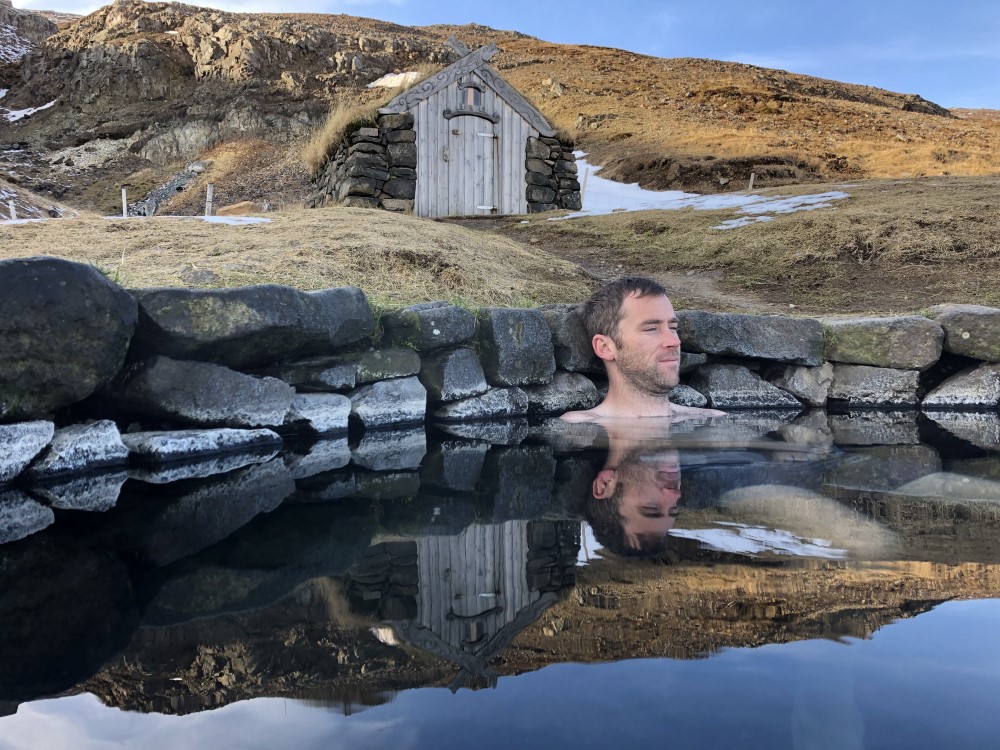 One of the oldest geothermal pools in Iceland 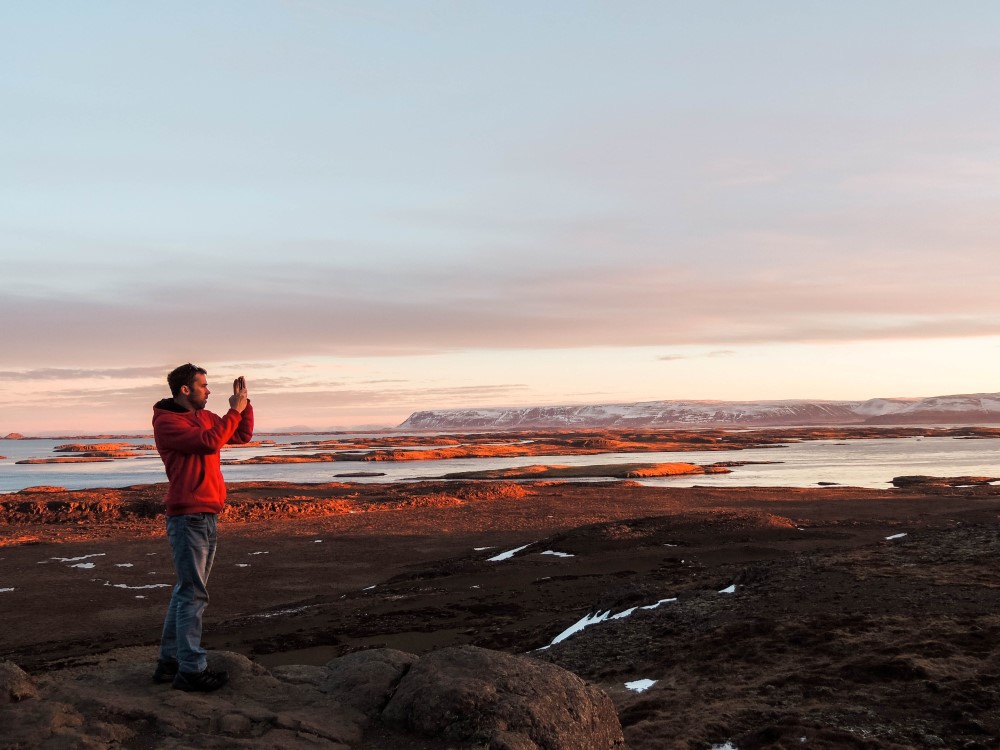 ← Souvenirs from Zanzibar The treehouse at Luara Wildlife →