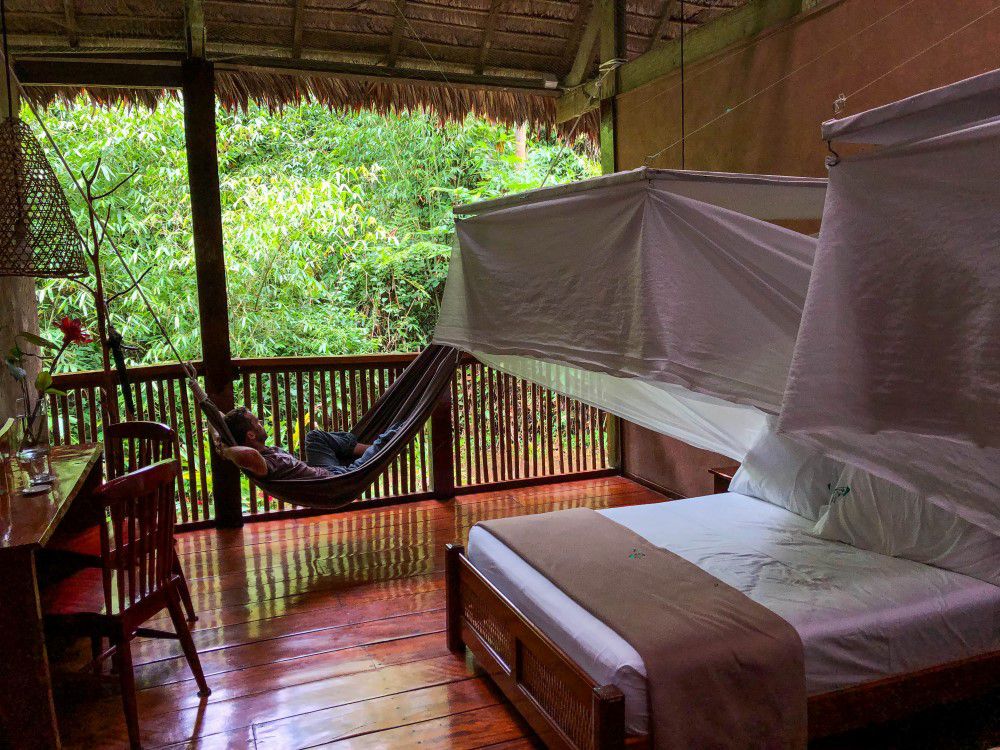 When we were in the dreaming stages of our sabbatical, Joe set up a spreadsheet so we could start mapping out the places we wanted to visit during our six-month window and how much time we wanted to spend at each location. He included a formula which added up the days, resulting in a line at the bottom of the sheet that said one of three things:

“We could spend longer somewhere.”

As we added and removed locations across South America, one thing remained constant: the Amazon.

Here’s the truth, though: this was Joe’s dream, not mine. Whenever I thought about the Amazon, while the idea of a lush jungle full of macaws and monkeys was appealing, the guys that take care of the “greatest fears” cabinet in my brain kept on waving a big red flag at me that said, “home-of-the-anaconda-mmmkay?”

I knew it was something I’d have to get my head around. I also knew that it would be worth it.

It was when we were in Peru that I had a brainwave. A trip to the Amazon would make the perfect surprise birthday present for Joe! Not only was it something I knew he would sell his soul for, but I had unintentionally been laying the perfect decoy foundation for months in my reticence to decide how and when we would go. So, secretly, I emailed a whole lot of lodges until I found the perfect one at a perfect low-season discounted rate. I booked us a flight to an undisclosed destination and told Joe he wasn’t allowed to ask any questions.

As we came in to land at Puerto Maldonaldo, the landscape was a bit of a giveaway. 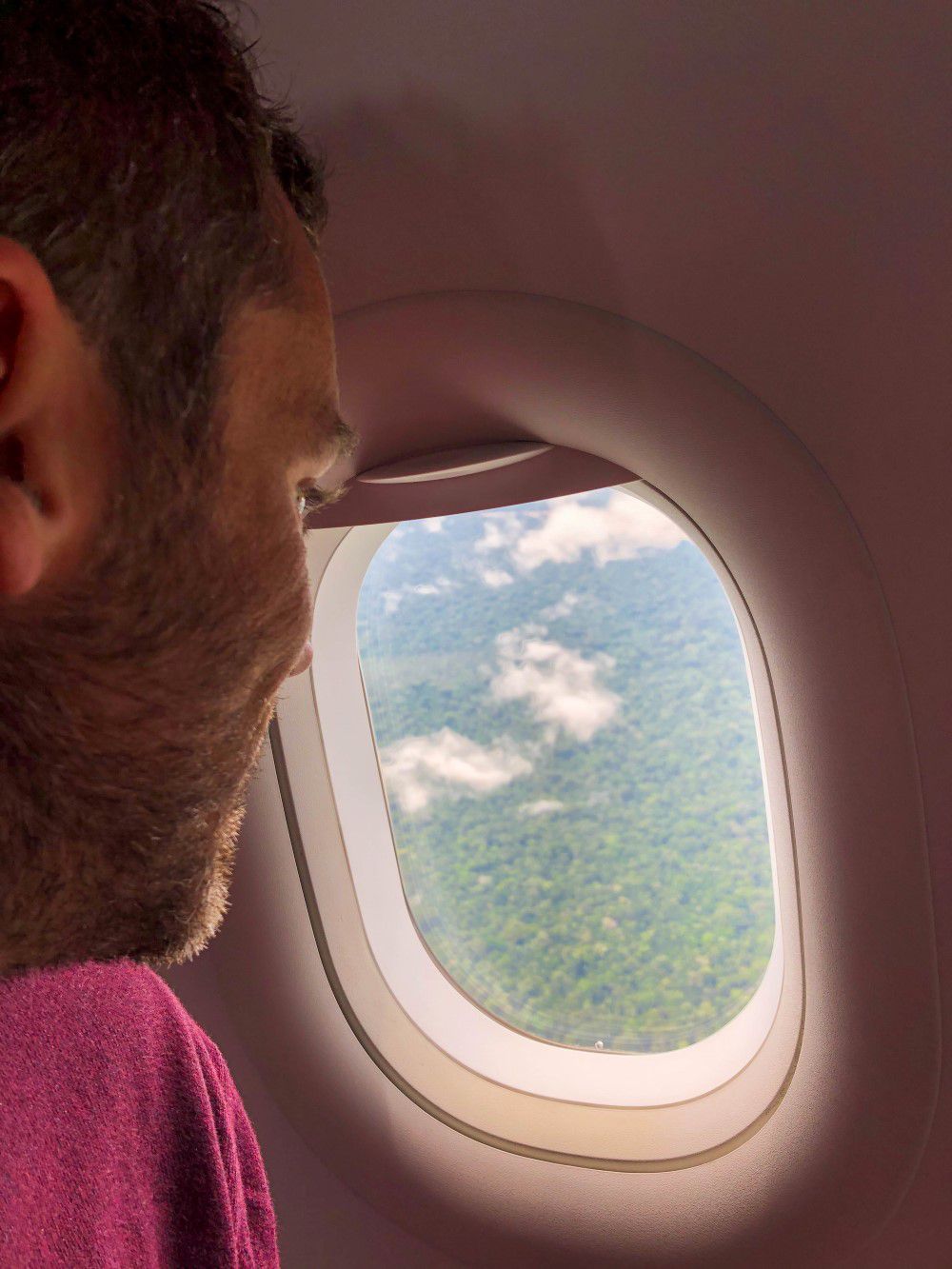 Joe trying to manage his expectations

When a guy in a khaki uniform was standing outside the tiny airport holding a sign with my name on it, Joe stopped trying not to smile. The guide introduced himself as Oscar and told us he would be taking us to the lodge which would take 45 minutes by car and then 45 minutes by boat.

Oscar looked a bit confused, especially as it was clear I was really enjoying myself.

“You have four nights with us, right?” he said, tentatively.

I decided that if I didn’t explain that this was a surprise for Joe at this point, things might get a bit weird.

Having researched everything about the lodge, and the array of activities we could choose from to explore the surrounding jungle – on foot, by boat, by bike, by day, by night, from hides in front of clay licks, to towers way above the canopy, to rafts on oxbow lakes  – this whole experience felt as much a gift for me as it was for Joe, because each time he discovered a new detail, his eyes would get all bright and he would say, “Oh my God…” 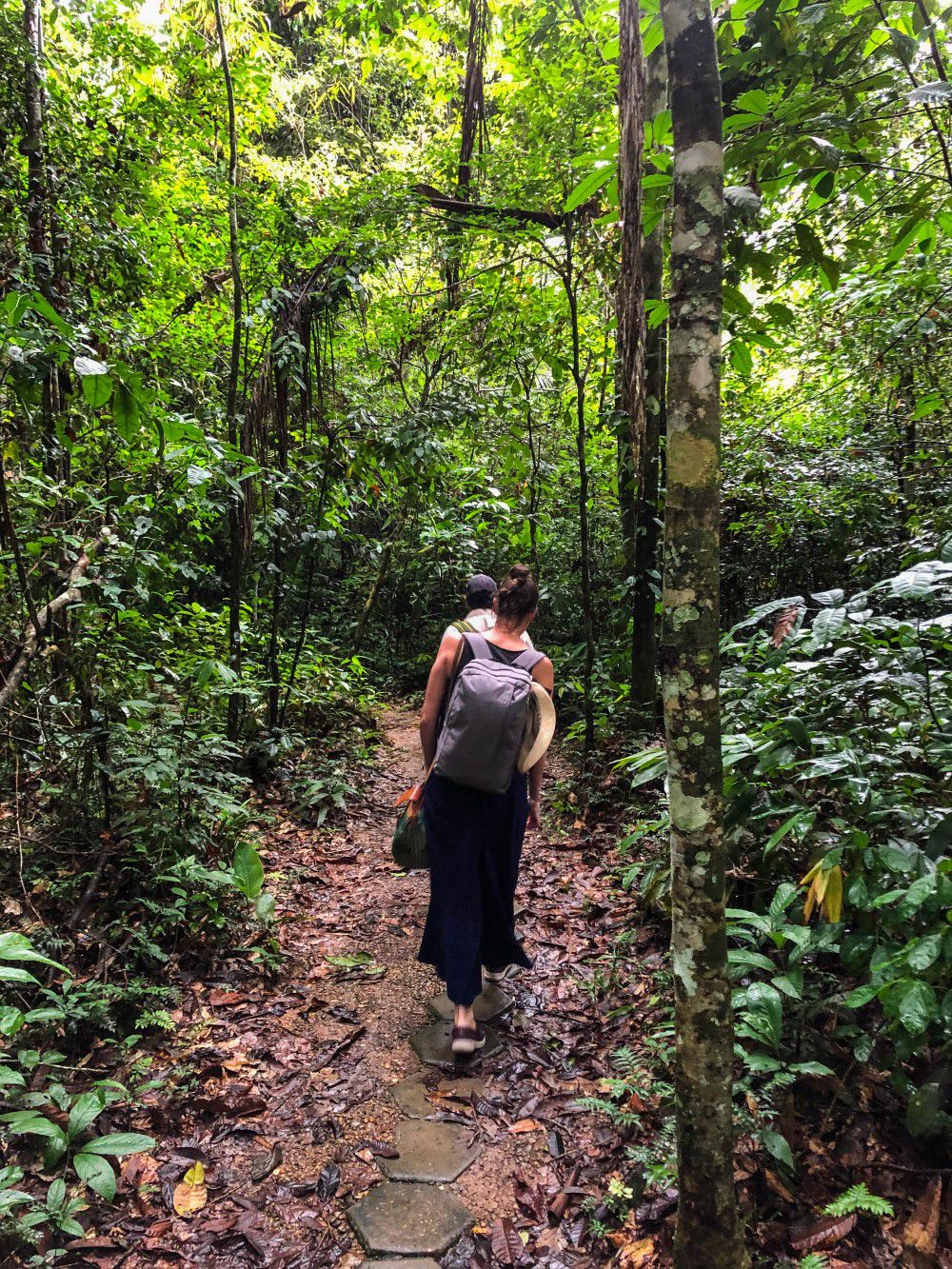 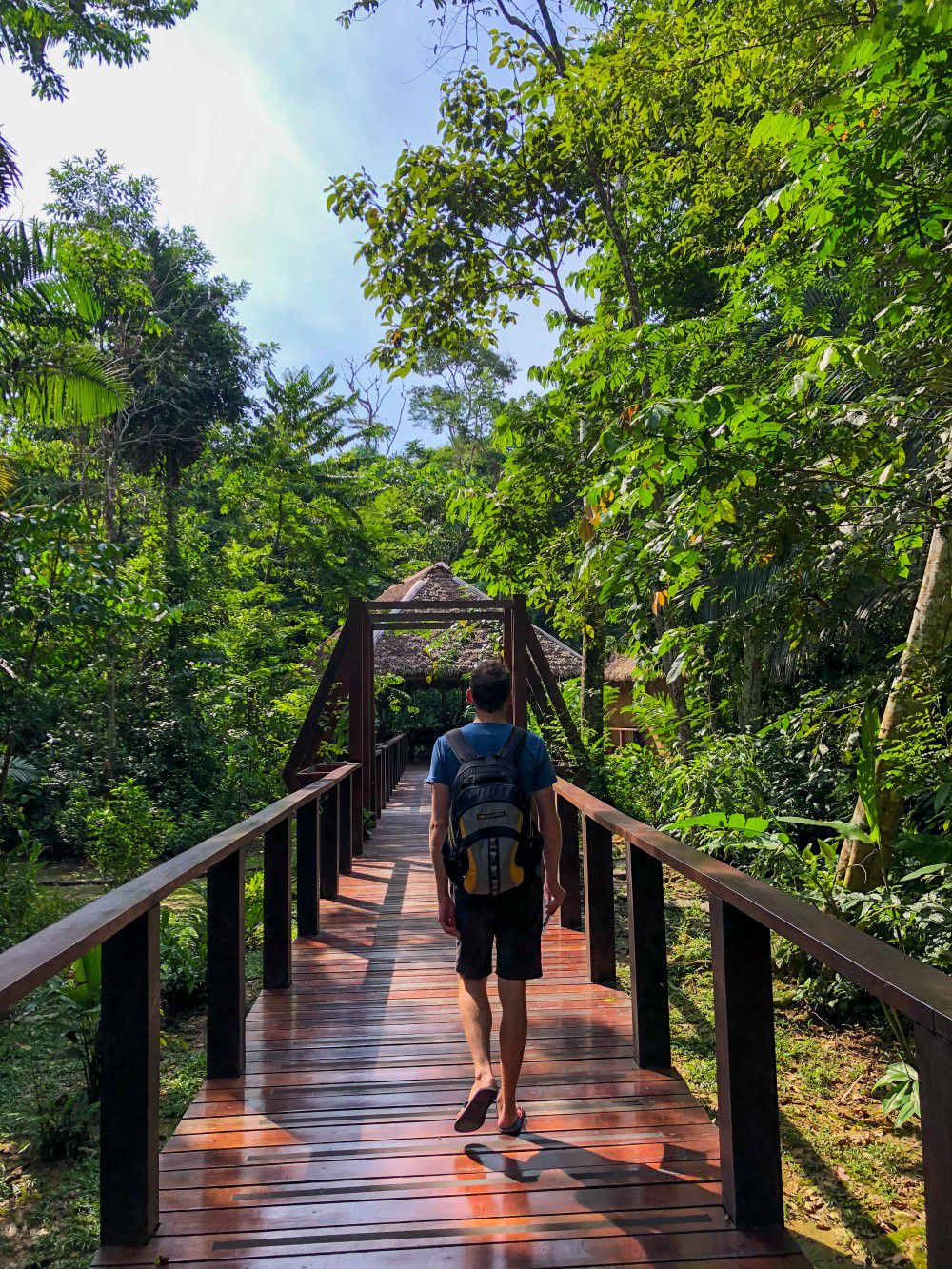 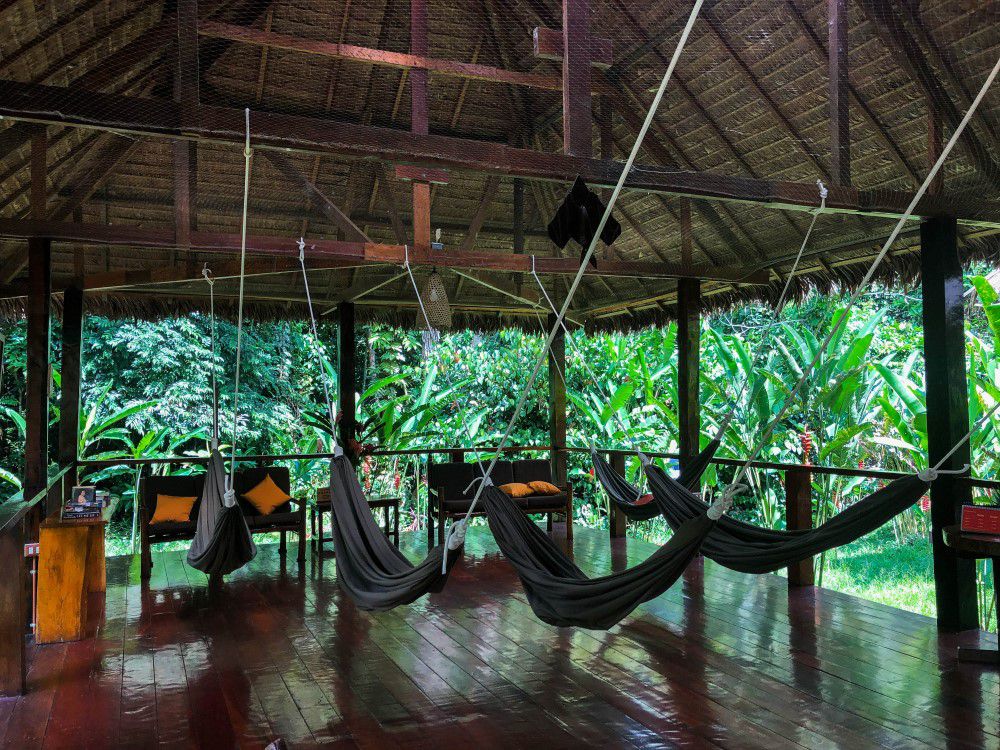 My first fear-test came within a few hours of arriving at the lodge. Joe really wanted to do a night walk. Through the jungle. In, you know… the dark. And, as it turned out, the rain.

“The frogs are very happy,” said Oscar, as he led us along the boardwalk to a shrill soundtrack of singing amphibians. I would notice this type of commentary a lot over the next few days. He always spoke of the animals as if they were humans.

“They’re a bit worried.” (The macaws)

Oscar paused and shone his torch into the knee-deep water on either side of the raised wooden path.

“Let’s go this way,” he said, stepping into the murky water, and moving off into the black.

I noticed that Joe didn’t hesitate. Whereas my brain was playing me snippets of a scene from that old Swiss Family Robinson movie I last watched when I was nine, involving a very similar body of water and a very large, long reptile (which three of them had to wrestle, but let’s not digress here).

It was, perhaps, fortunate that I didn’t have much time to deliberate, as the longer I did, the greater the dark gap would become between me and Joe and Oscar. I took a breath and stepped into the water. 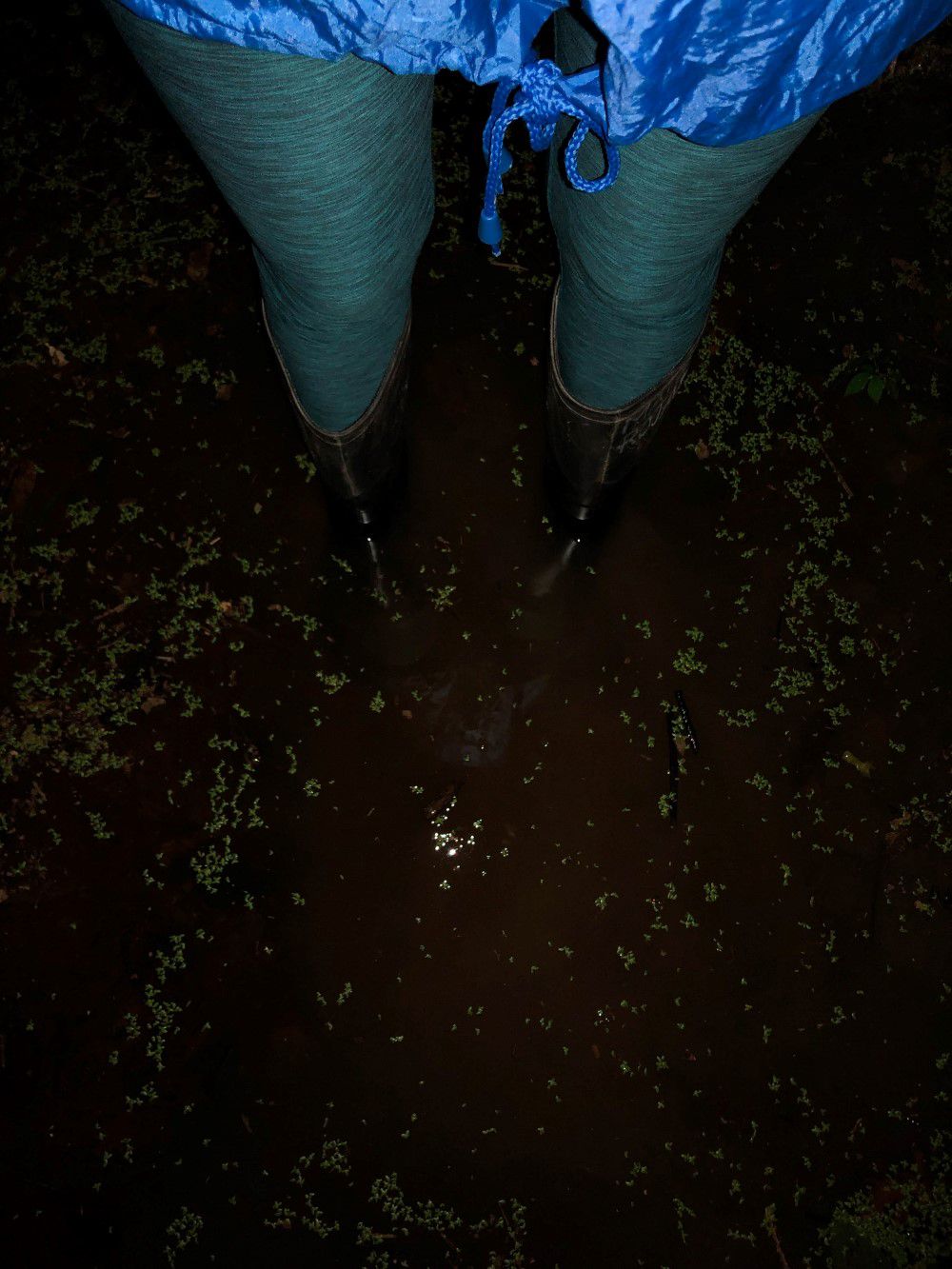 It’s been a long time since I’ve been so hyper aware of every sound, movement or sensation. But, as Oscar quietly pointed out creatures in the beam of his torch – a bird with miraculously blue feathers sitting statue-like above us; stick insects like something out of a Harry Potter book; a tiny frog so camouflaged it took my eyes ages to pick it out – I slowly started to relax (strong term), marvelling at the fact that we were actually in the Amazon, and only partially fixated on the fact that both these men were still actively looking for snakes. 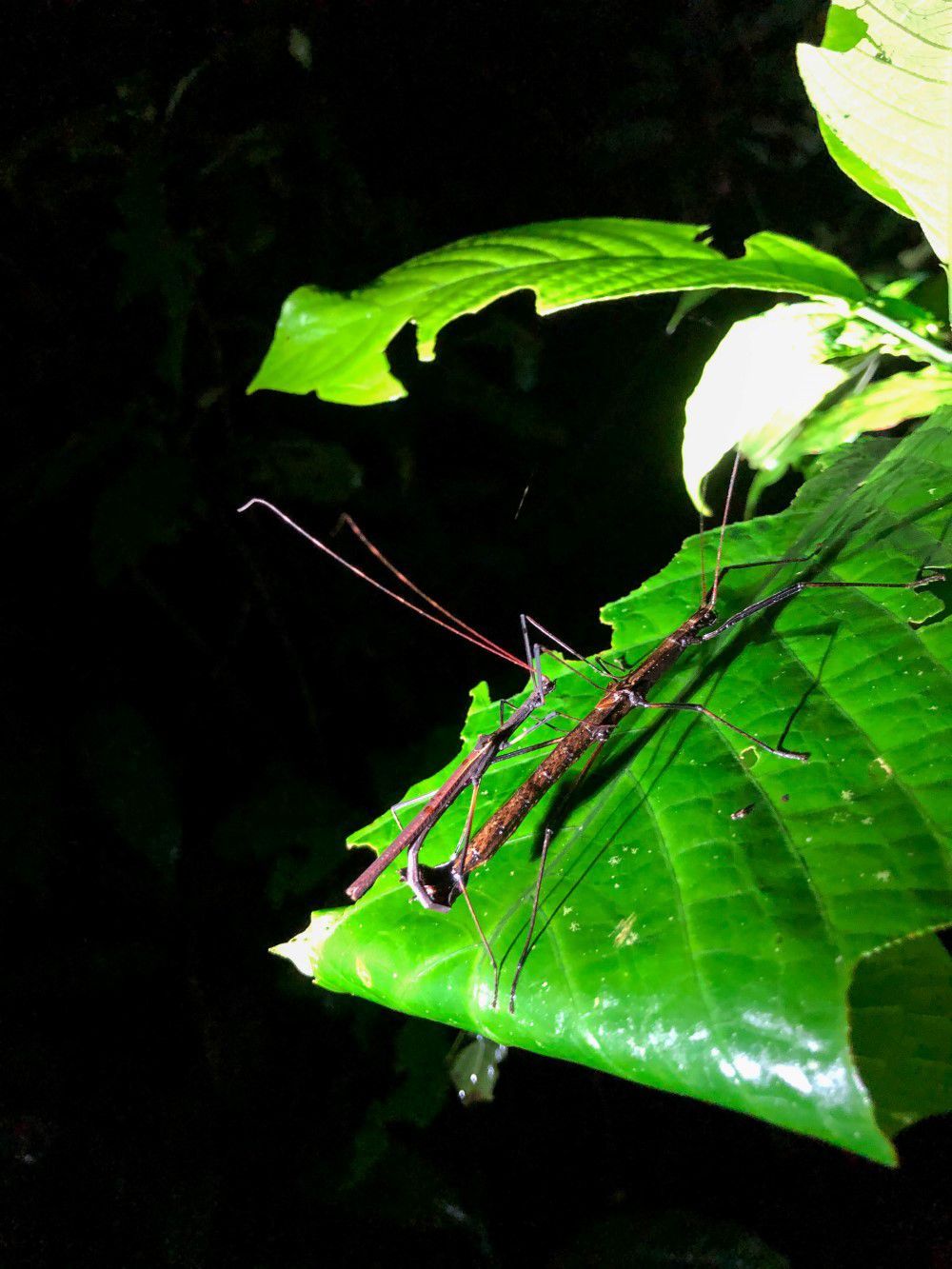 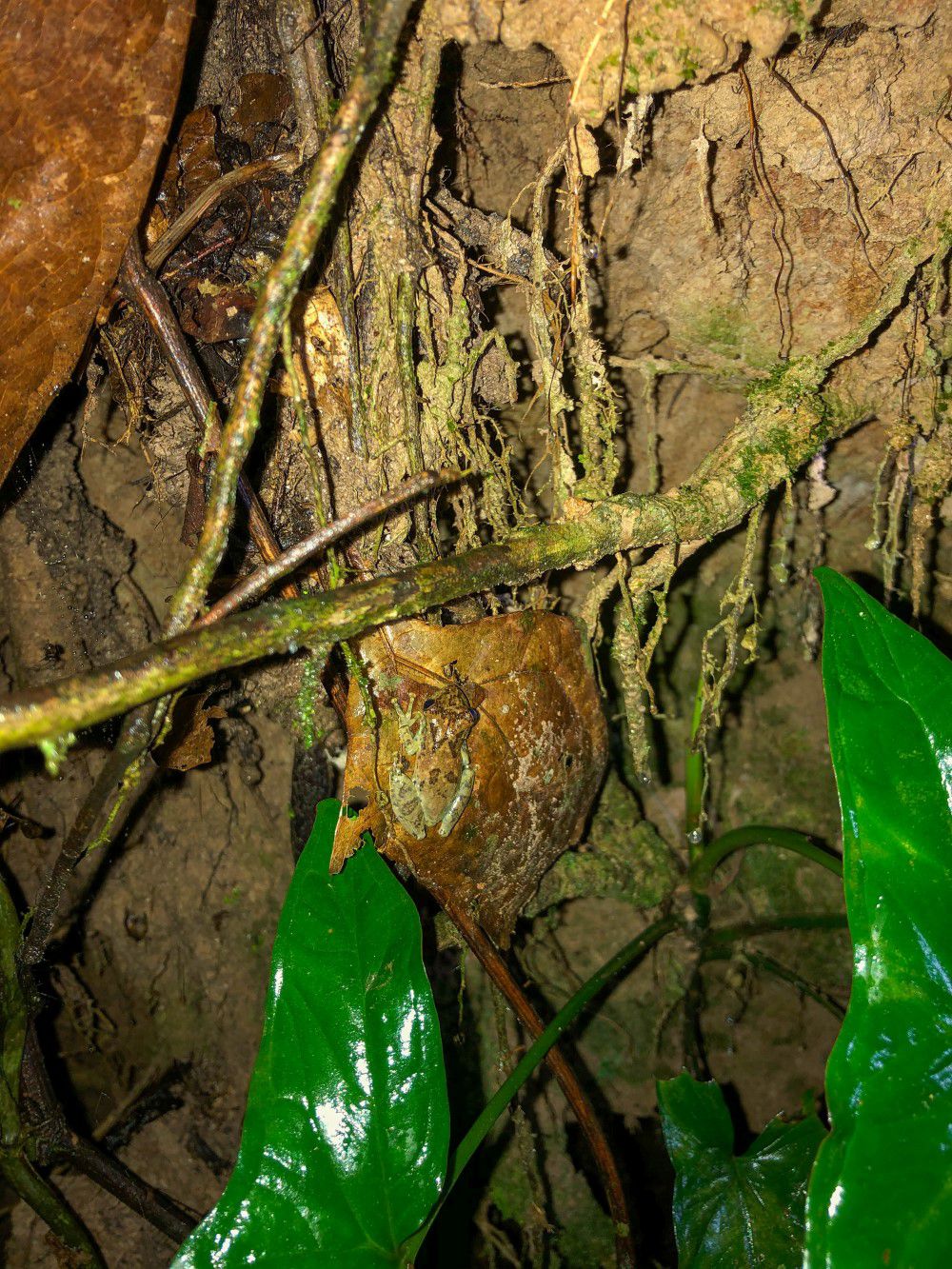 I, on the other hand, have never actively not looked for something so hard in my life.

Much to my delight, we made it through the whole walk without seeing one – and then the next couple of days too.

On our last full day, we were walking through the jungle while my eyes travelled up and down the muted sunbeams that filtered through the canopy, making magical patterns in the humid air, when Oscar stopped in his tracks. 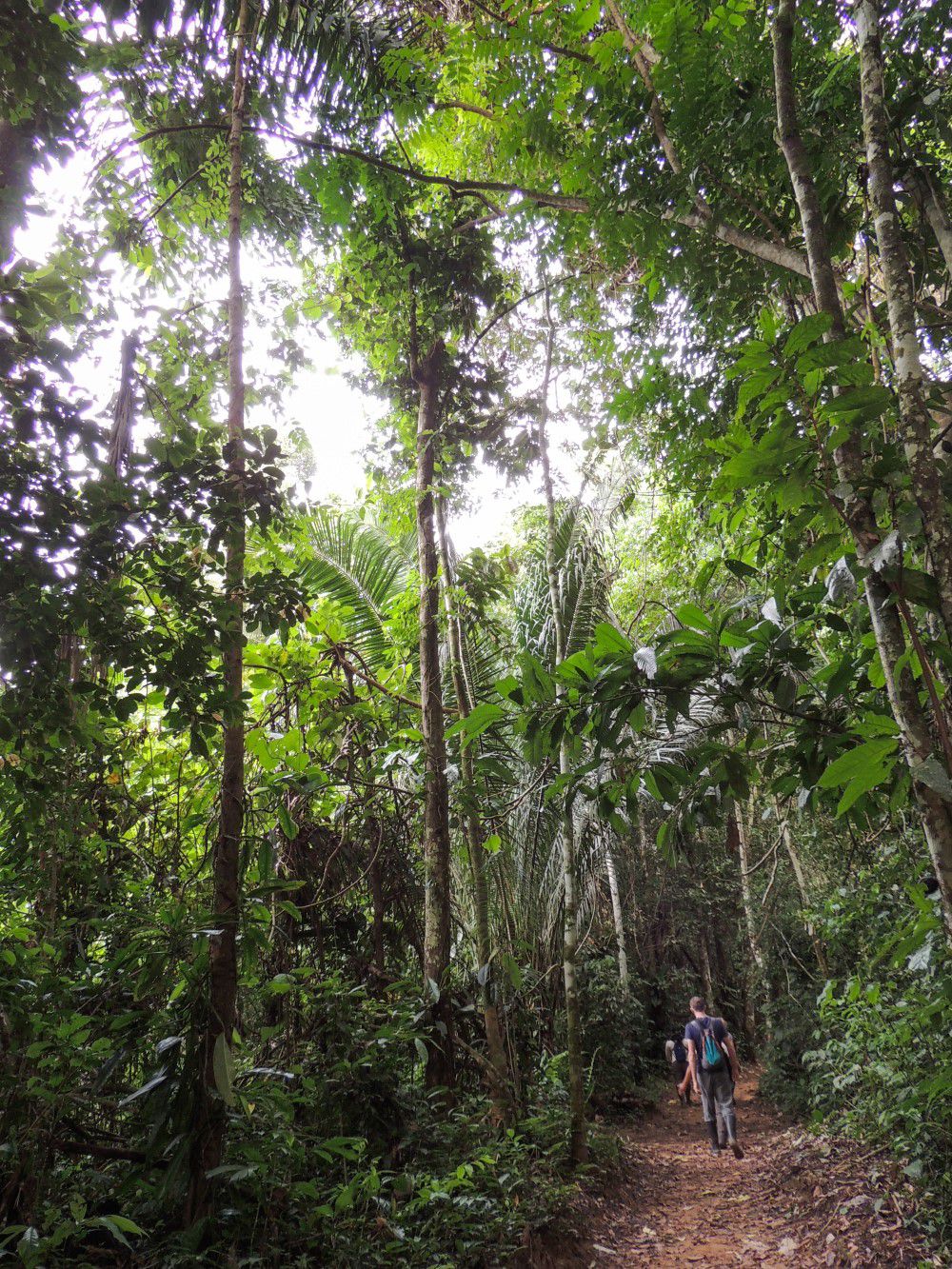 “Where?” Joe and I said immediately, him because he wanted to see it, me because I wanted to know precisely where not to look (and be).

“I don’t know,” said Oscar, starting to move off the path into the jungle.

“How do you know it’s there then?” asked Joe.

“I heard the frog it was eating screaming,” he said.

Joe and I looked at each other with raised eyebrows and small smiles.

“Did you hear anything?” he asked me softly.

“No,” I said, keeping my feet firmly planted on the leafy path, while Joe and Oscar climbed through the vegetation where they did, in fact, find a thin snake, which, devastatingly, was quite difficult to actually see.

Over the course of our stay, we saw macaws bright as wax crayons, red howler monkeys lit gold by the sunset, caimans with beady eyes and cold stares that melted into the reeds the second they heard a family of giant river otters on a fishing expedition. We watched spider monkeys swing by their tails, capybaras wallow in the mud, and the cute bottoms of agoutis disappear into the foliage. 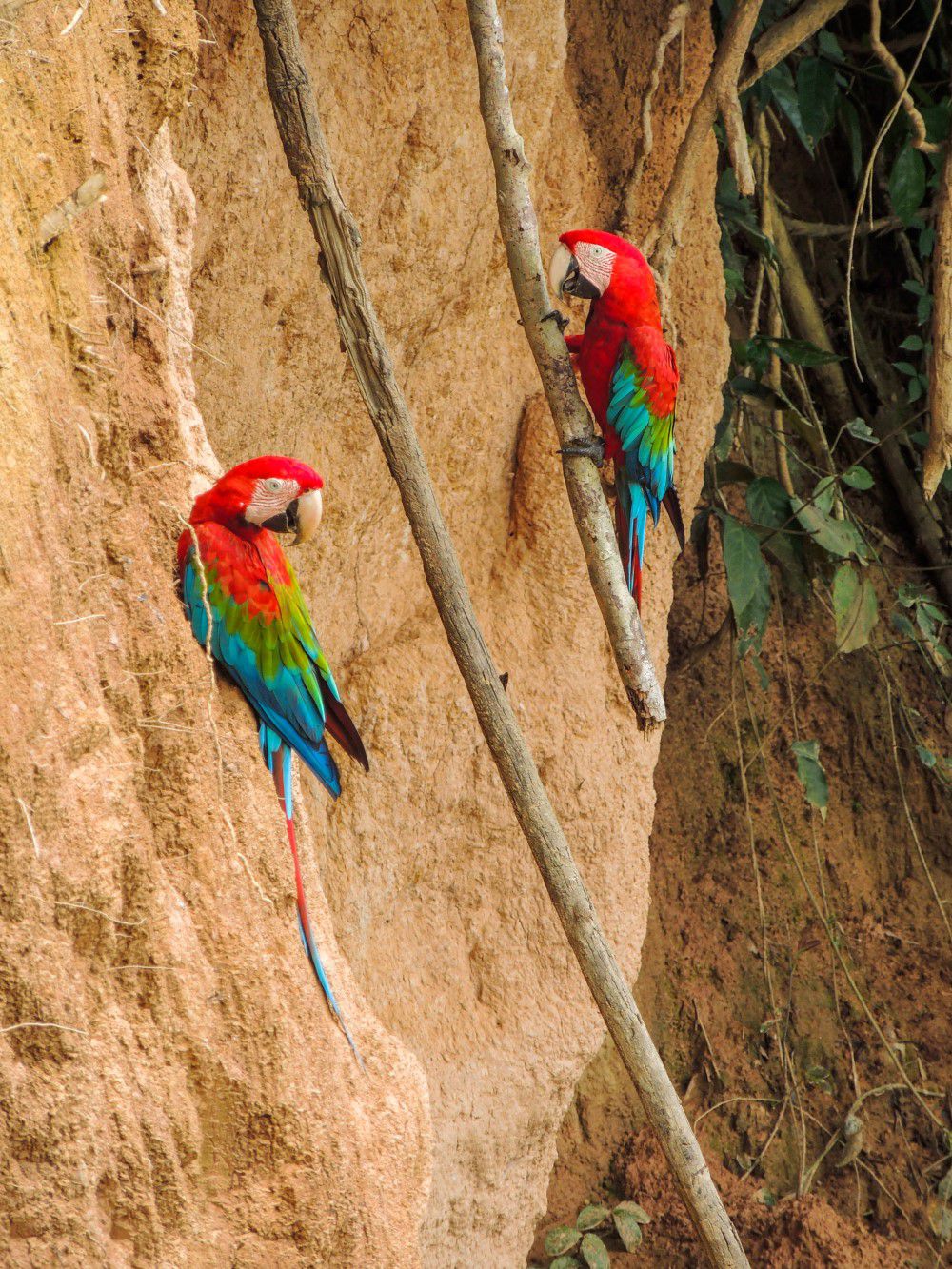 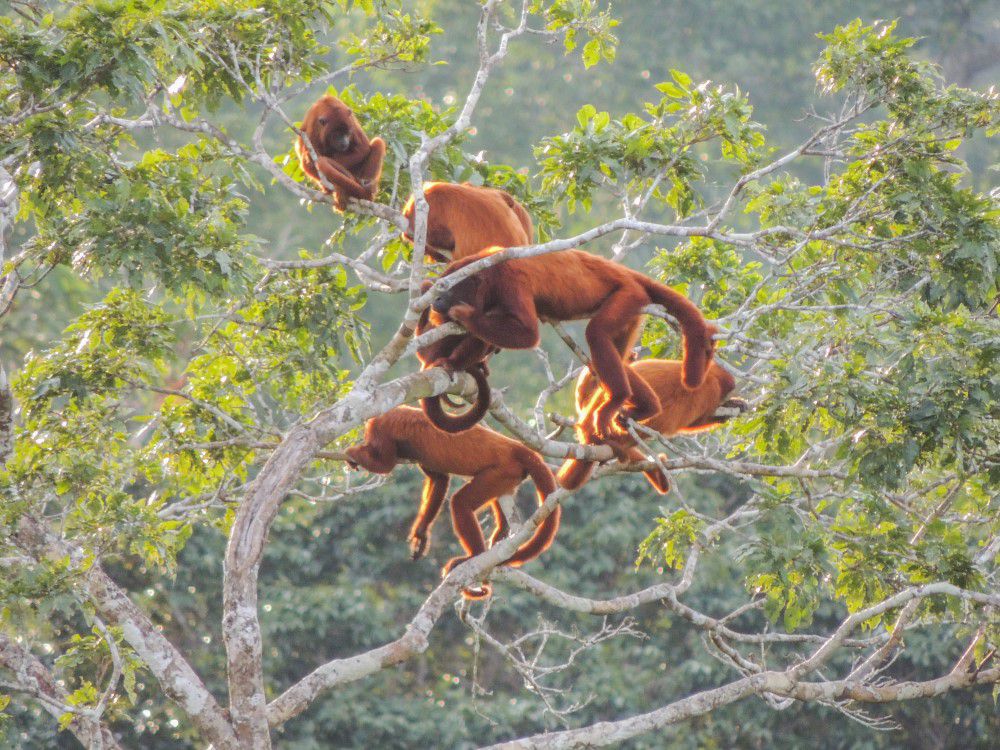 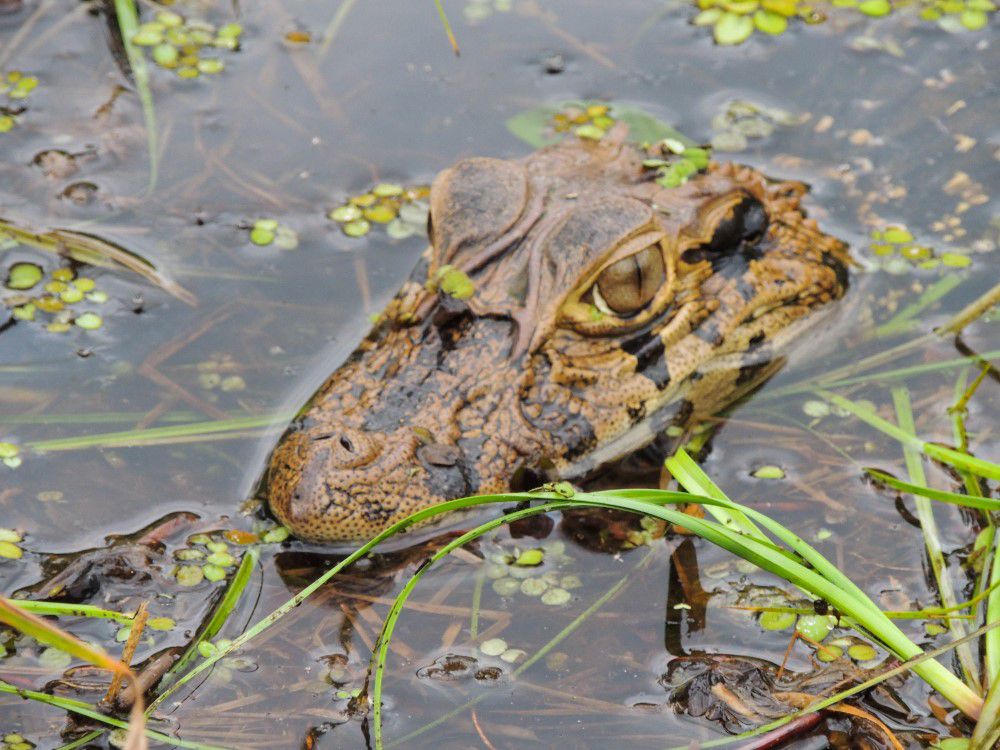 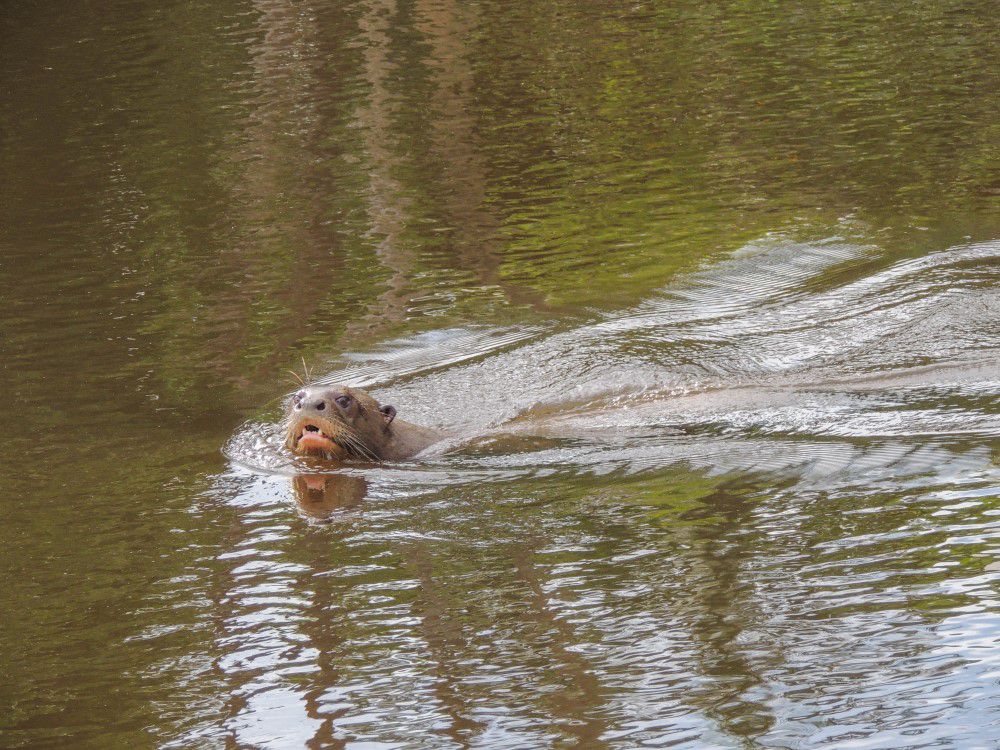 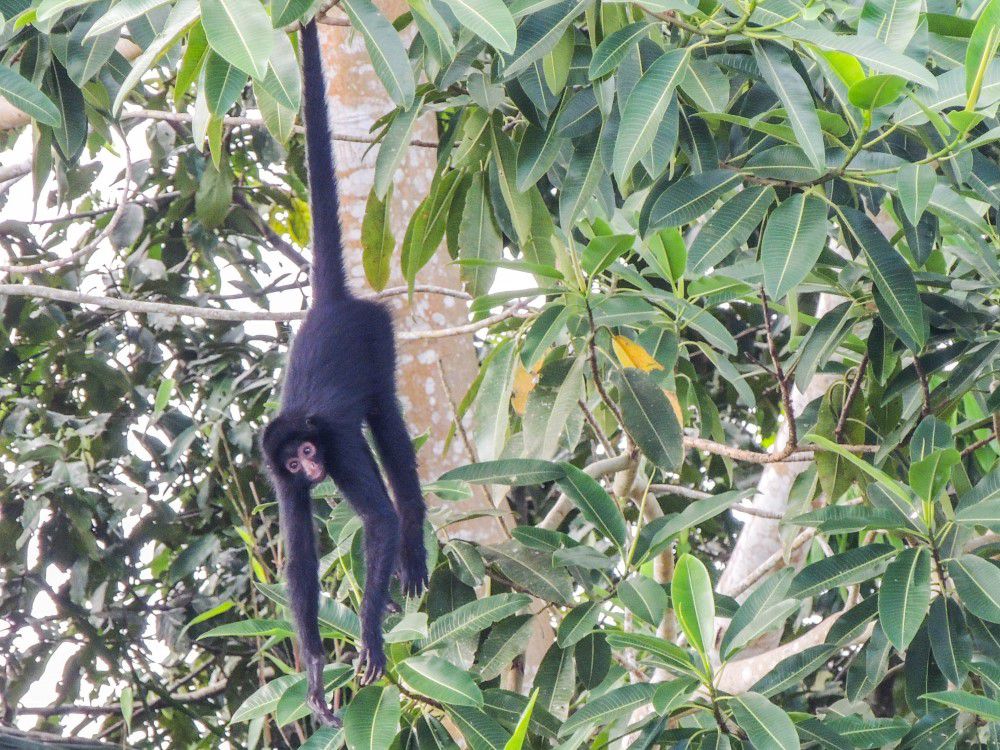 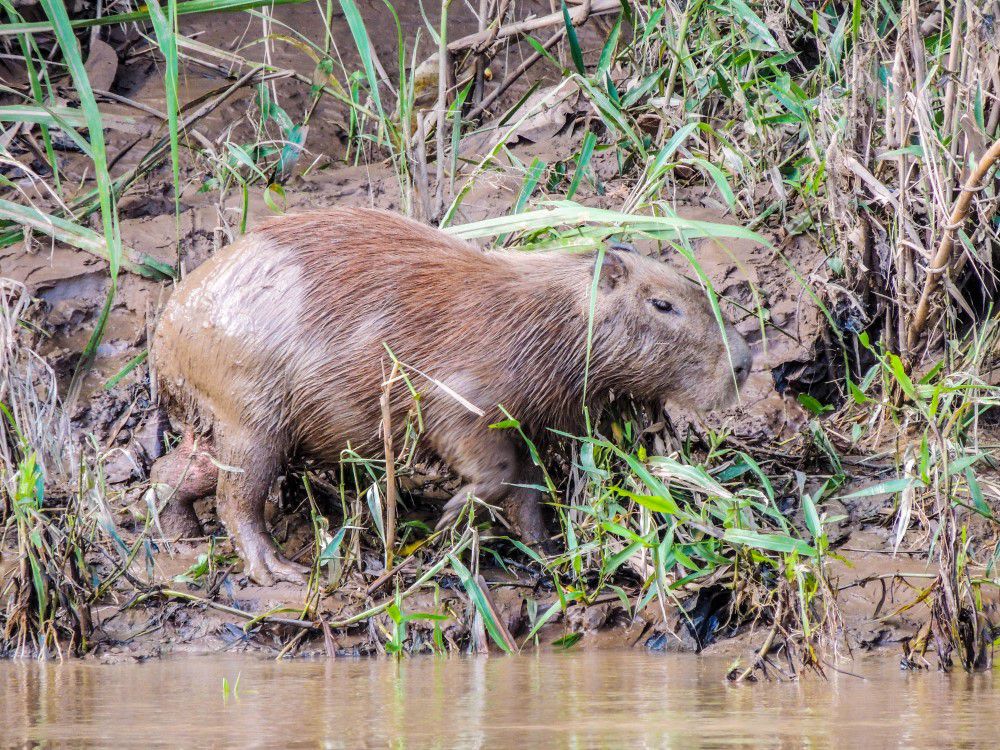 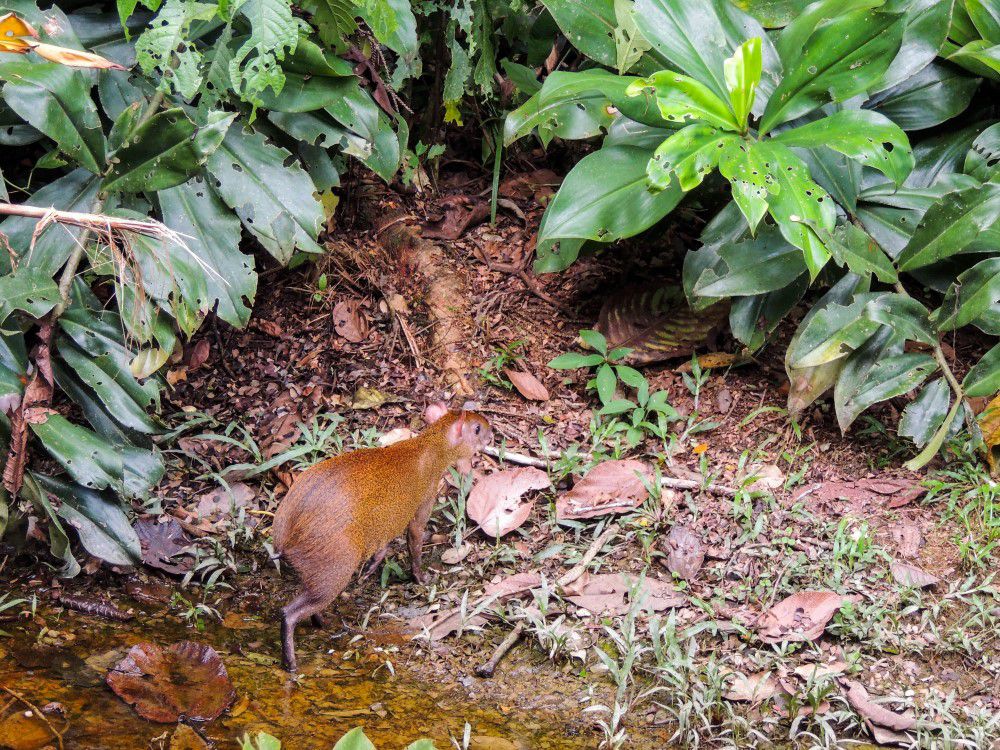 One early morning as we were cruising sleepily upriver, I was lost in thought about the lives of the guides and the things they must miss spending so much time away from their families. Listening to them talk, it sounded like they were constantly in a long distance relationship – missing their families when they were in the jungle, and missing the jungle when they were with their families. They must really love what they do, I thought. There must be so many small and big moments that make it worth it.

Suddenly Oscar whipped his arms through the air, in a large T, jolting me back to my surroundings as the boat captain instantly cut the engine.

It stood on the bank in the sun, gazing across the river. When it spotted us, it slunk into the bushes where it watched us guardedly. Oscar was so thrilled at this rare sighting that he relieved me of my camera and started snapping away in delight. 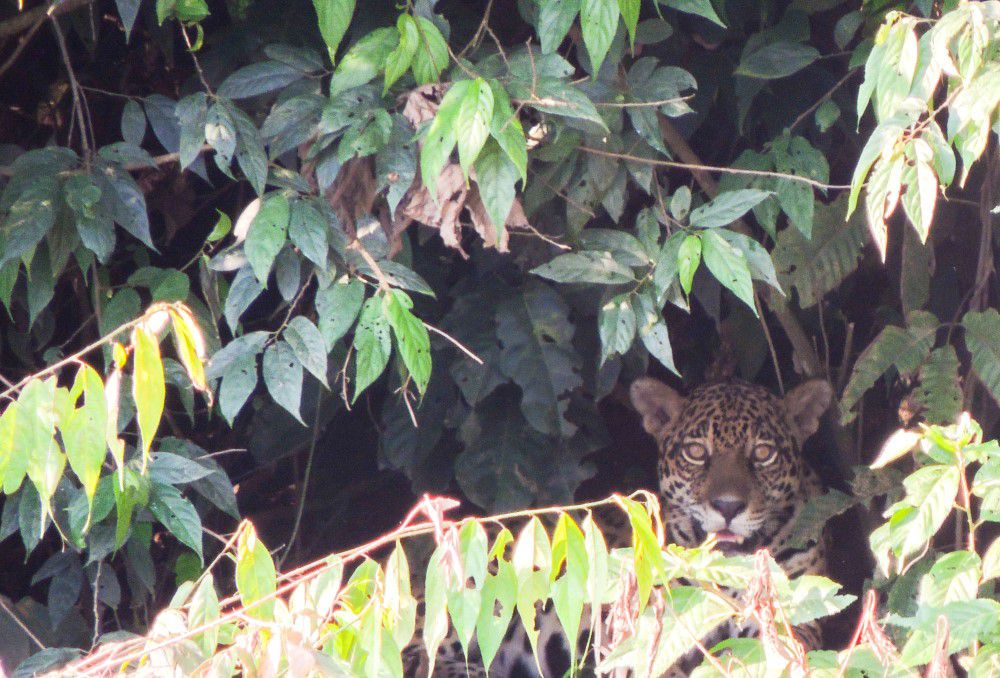 The only other moment that rivaled this one in terms of thrill factor was the night in our lodge when Joe wandered into the bathroom to wash his hands and a huge frog leapt out the basin in the general direction of his face.

“Moses!” he said, while I wiped tears of laughter off my cheeks.

As we climbed onto the boat that would take us back to town at the end of our stay, Joe was noticeably downcast. A job well done, I felt.

What a thing to have experienced. We were absolutely covered in mossie bites. But there was no denying that the jungle had deserved its permanent place on that spreadsheet. 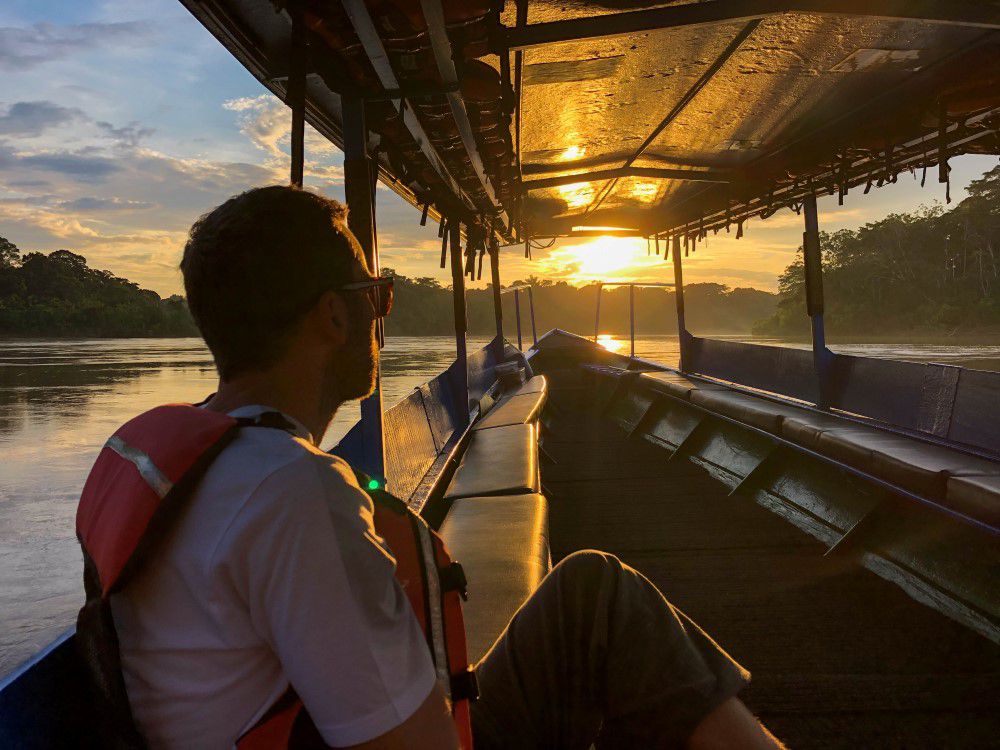 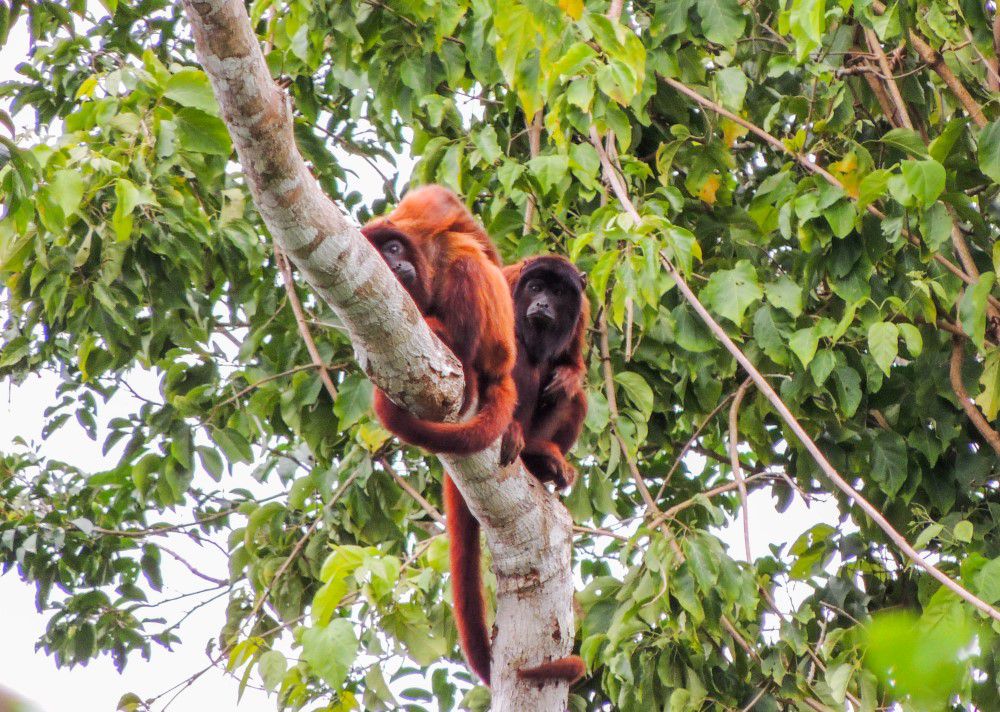 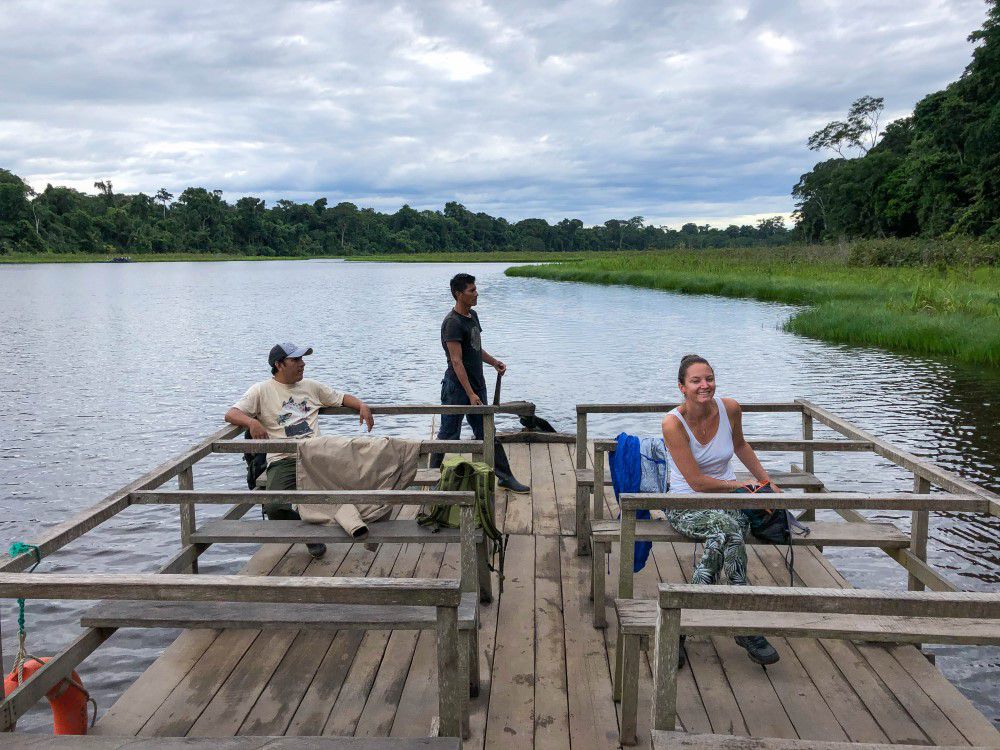 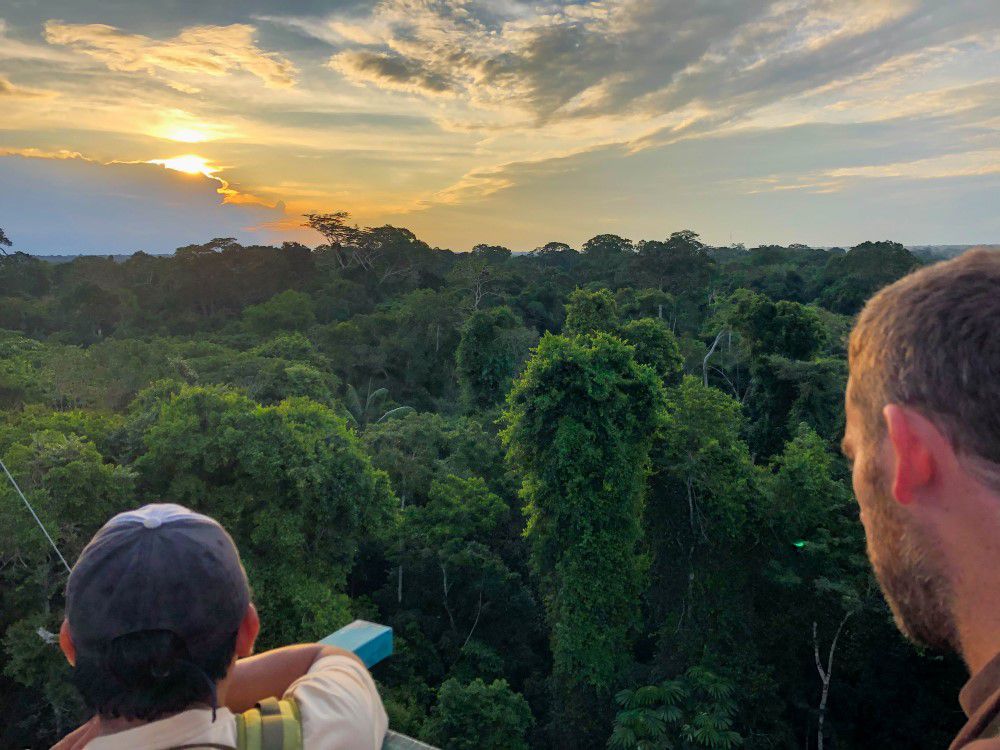 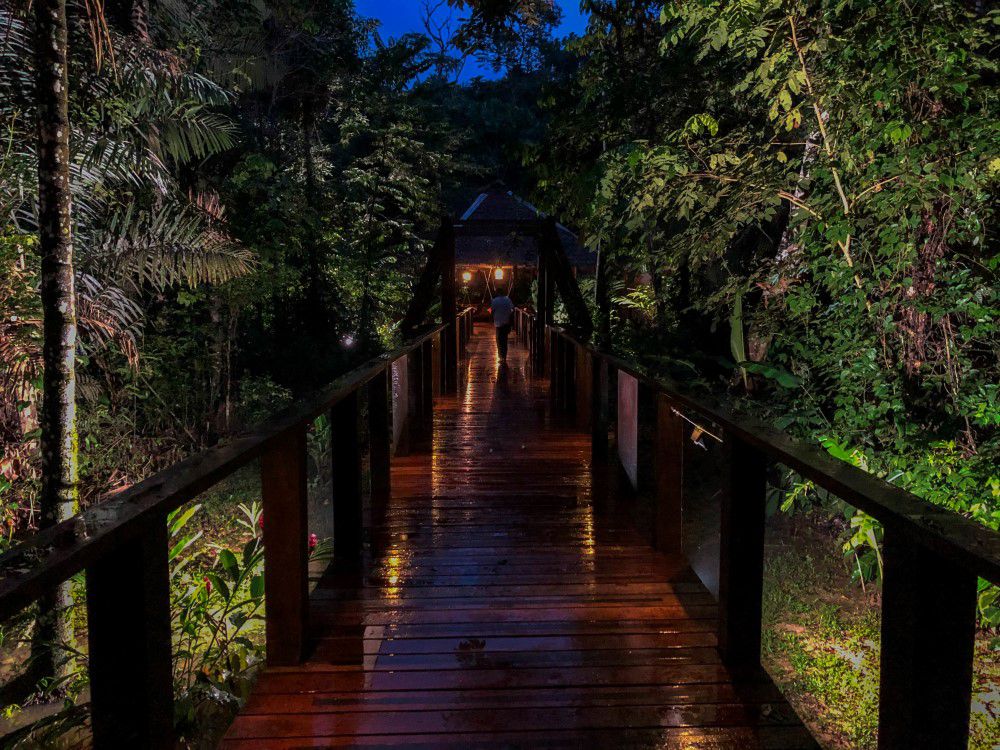 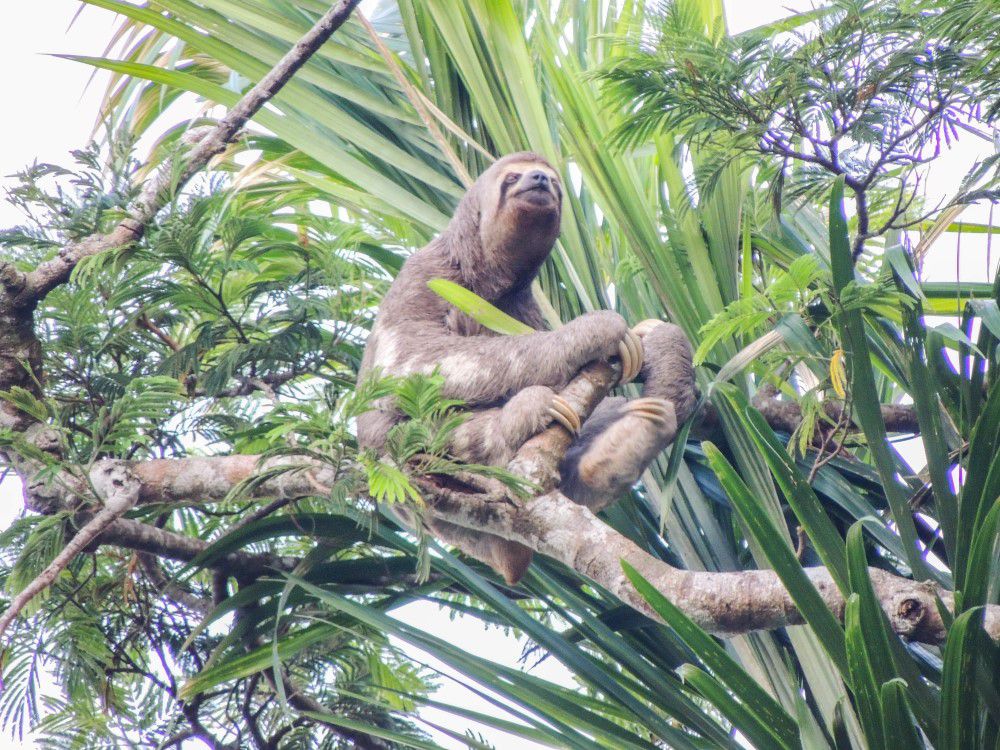 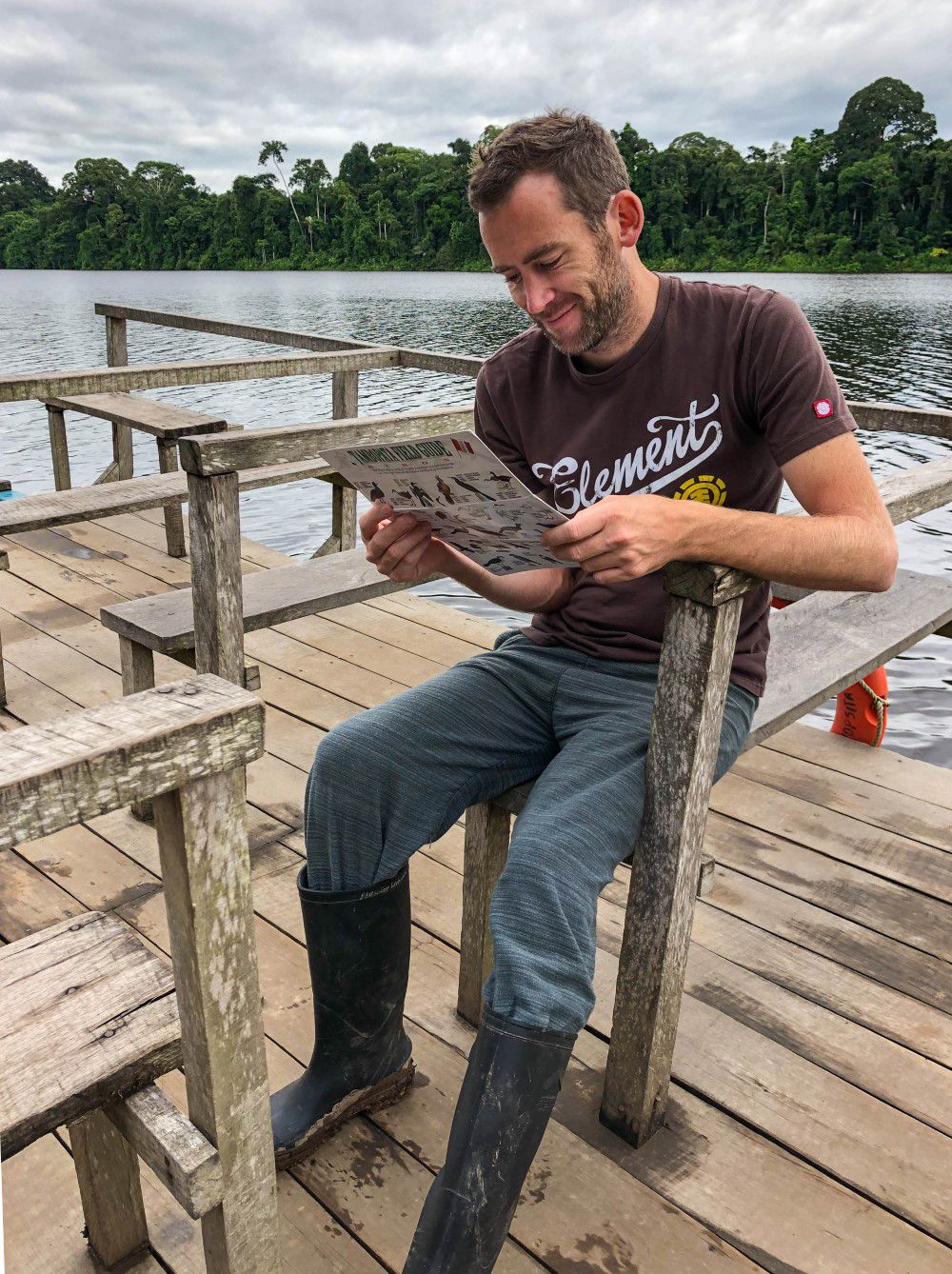 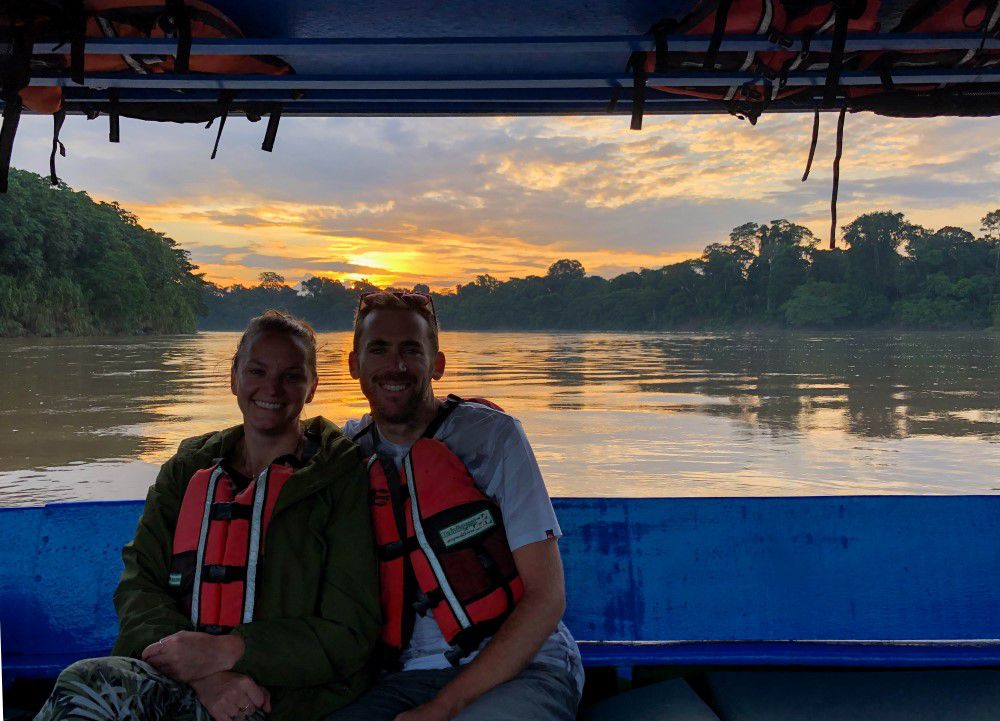 ← The train from Kandy to Ella Hiking in Bariloche →