The train from Kandy to Ella 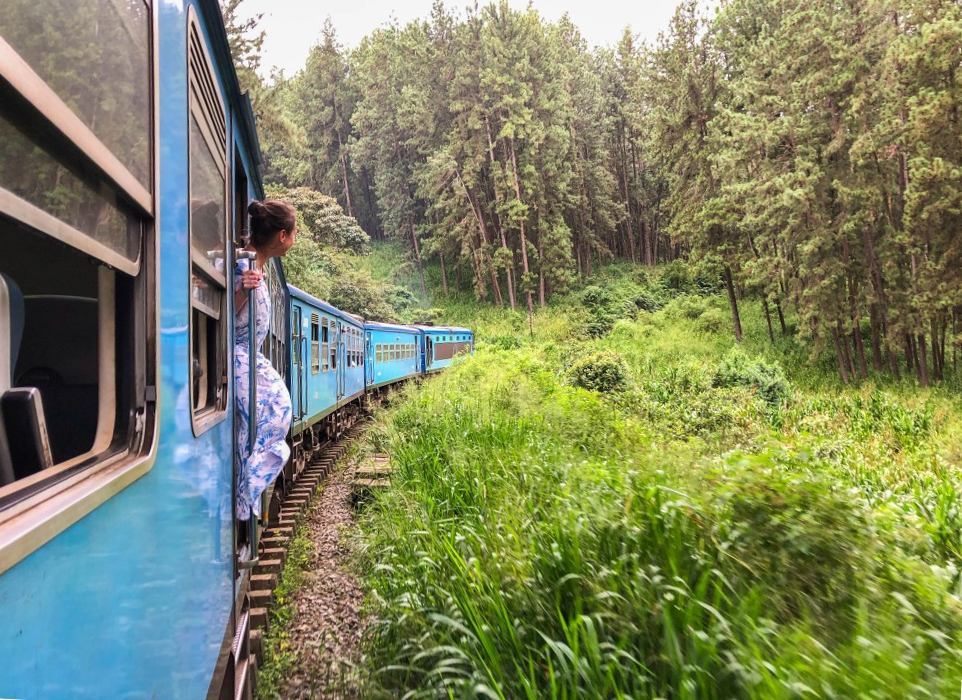 Luckily for us, we’re travelling at the start of school holidays, when a normally full train becomes something of a mosh pit.

The reserved train tickets generally sell out weeks in advance. Many are snapped up by tour agencies and sold to tourists at ridiculously inflated prices, so I’m told.

As we stood in the queue to book tickets at the Colombo train station, a few days in advance (unusually diligent forward planning for us), the guy at the counter told us that tickets were sold out, adding an apologetic head bobble. The guy behind us overheard our exchange, and as we walked off, he said, “Wait, wait, can I tell you?”

He kindly explained that second and third-class tickets are still sold on the day – there’s no limit to the number they sell. So, if we arrived at the station about half an hour before the train departure, we would definitely be able to get tickets. Seats were another story.

This was good news! What was less appealing was the fact that the journey would last six hours (if we were lucky), and we each had a suitcase and, at this stage, a rather heavy backpack. So we began to research our way out of our predicament.

Joe found a blog that offered this genius travel hack: the train from Kandy to Ella actually originates in Colombo. Kandy is the popular mid-way stop, where a lot of people get off. So, if you get a tuk-tuk to Peradeniya, the stop before Kandy, and board the train, even though you will have to stand initially, you will have first dibs on a seat when the promised mass exodus happens at Kandy.

We took one extra precaution and took a tuk-tuk bright and early, arriving at Peradeniya an hour before the train was due to depart. This proved to be a bit of an overachievement, as there was not a single person in the queue to buy tickets, and we walked onto an almost empty platform. 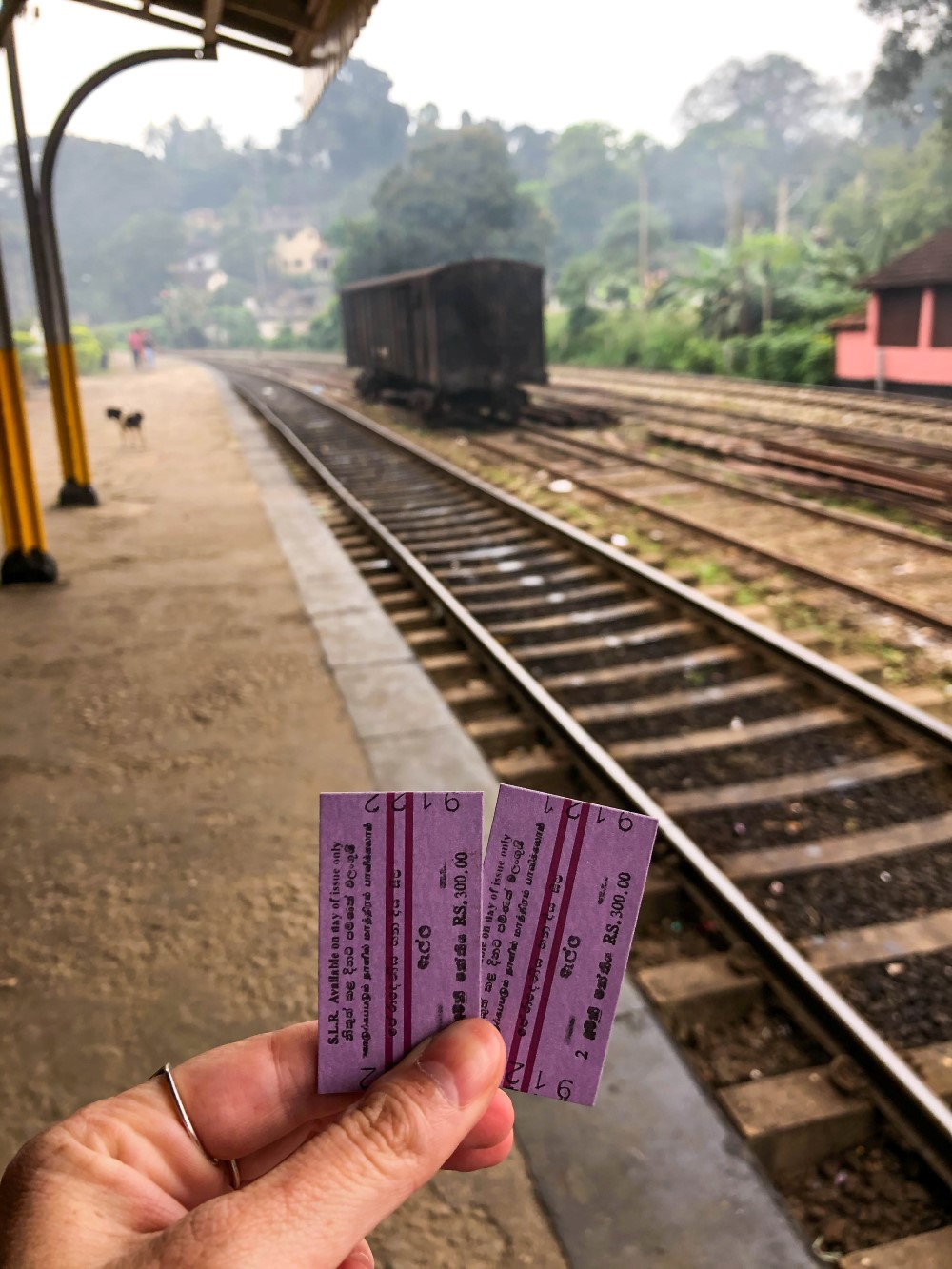 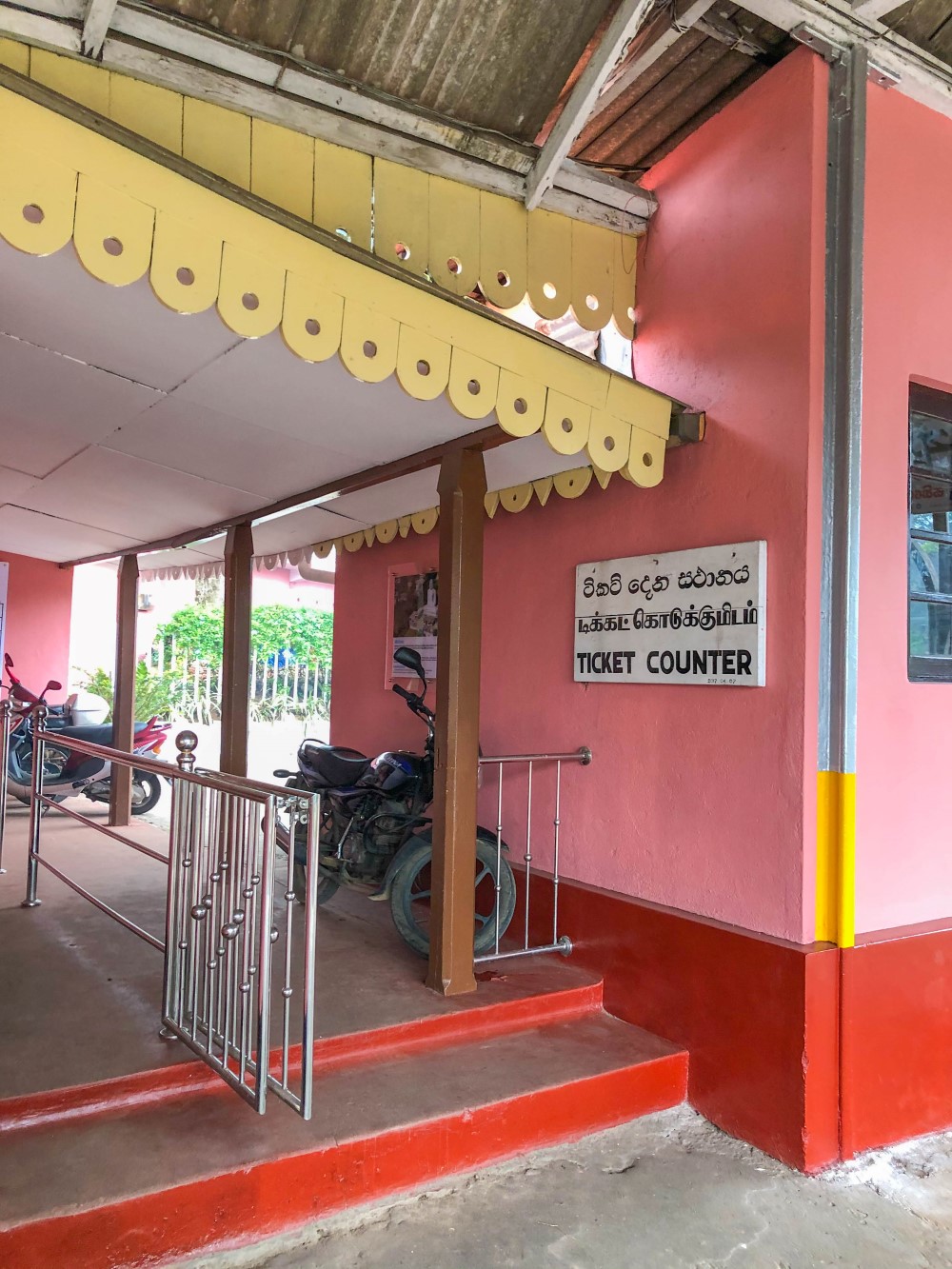 This whole station looks like something art directed by Wes Anderson 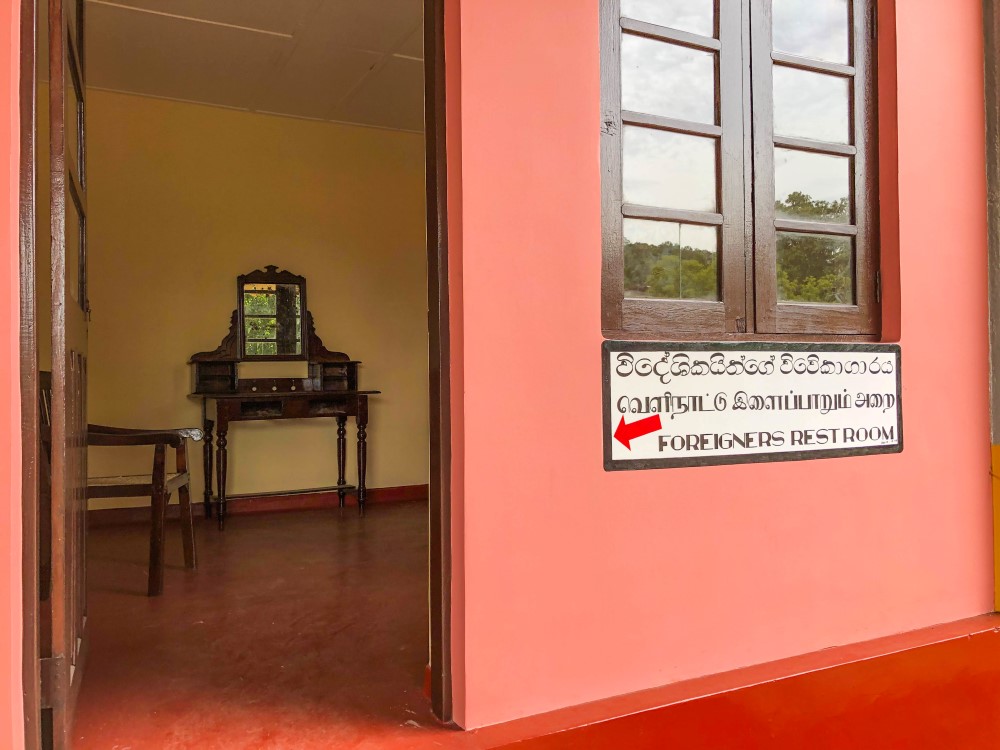 Not one to waste an opportunity, Joe wandered off to look at the trains. After a while, I started to wonder where he’d gone and stood up to see him surrounded by a group of local guys, grinning as he climbed up and into what looked like a carriage of an old train. Later I learned that it was actually the only working steam crane in Sri Lanka, which they use to repair broken locomotives, among other things. 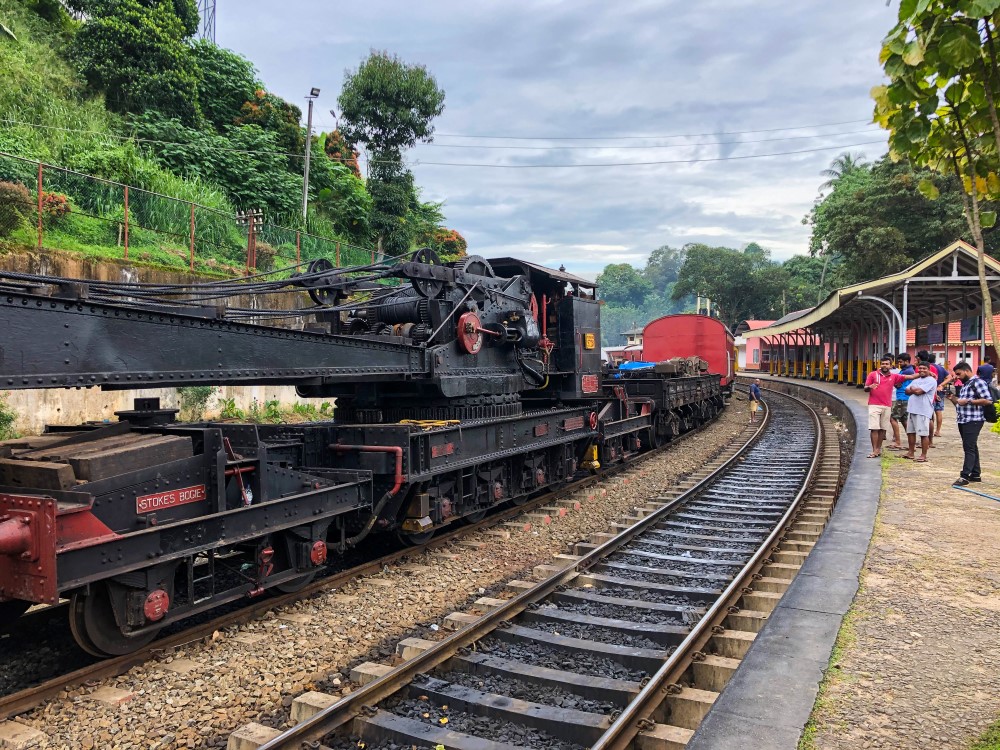 I laughed, guessing (correctly) that his enthusiastic questions had led to a bit of a tour. At one point he had 10 tour guides, and when he said a sincere thank you after they had shown him everything and answered all his questions, he received a synchronous head bobble, all in the same direction, as if choreographed.

As we waited, whenever one of the crew passed us, they would give Joe a rapid progress update on their project at the station, and it was hard to tell who was more chuffed by these exchanges. 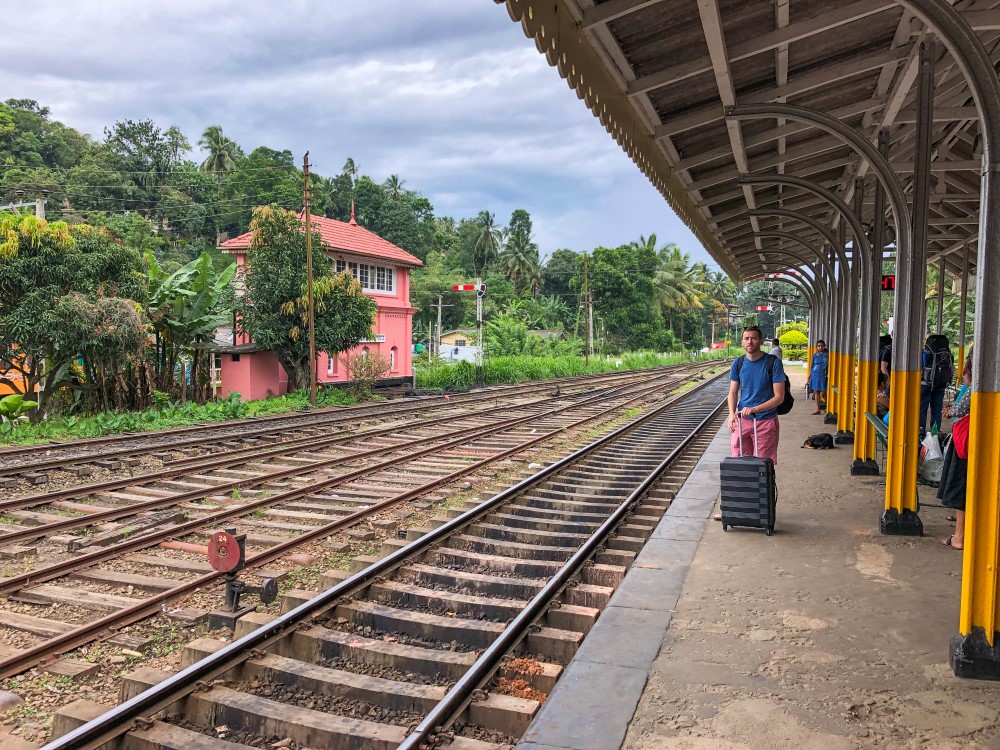 When the horn eventually blew and the train came careening into the station, people started running. The carriages flashed past us – 3, 3, 3, 2! And we ran too. The unreserved second-class carriage was absolutely packed, and getting our bodies and our bags up through the door was a project in itself. We squeezed past the people waiting in the open doorway, and tried to make our way into the aisle, which would be our best chance of nabbing a seat when people got off at Kandy, but somehow the densely packed space was already dotted with tourists who had made their way through from the back of the carriage, not being hampered by bags, which they had sent on with tour companies for exactly this reason, it turns out.

As soon as the train pulled into the Kandy station, it became apparent that the antics at Peradeniya were just a mild warm-up. People were pushing and shoving, passing bags through the train windows to book seats before scrambling on board, sliding into seats right beneath hopeful bottoms already being lowered – like one utterly ruthless game of musical chairs.

Joe and I were left standing, staring wide-eyed at one another across the carriage. We had clearly been waaaaaay too South African about this and had learnt the hard way that sometimes being polite, even mildly polite, is just not an option.

“Let’s get off,” Joe mimed to me through the sea of people.

I knew I didn’t have a lot of time before the train pulled off again, so it was with some anxiety that I tried to make my way through the mosh pit with a suitcase, and got nowhere. Panicked, I looked at Joe, who was now on the platform.

“Just elbow your way through!” he mimed again, while I ramped up my, “Excuse me’s” to a much louder “I need to get off the train!” which seemed to do the trick.

We stood in silence, crestfallen that our genius plan had failed, but agreed that standing with bags for six hours wasn’t really an option. We bought some samosas for salvation, sanity and stamina, and took a taxi back to Peradeniya to give it a second shot.

Walking into the station, I said, “We just need to be aggressive.” 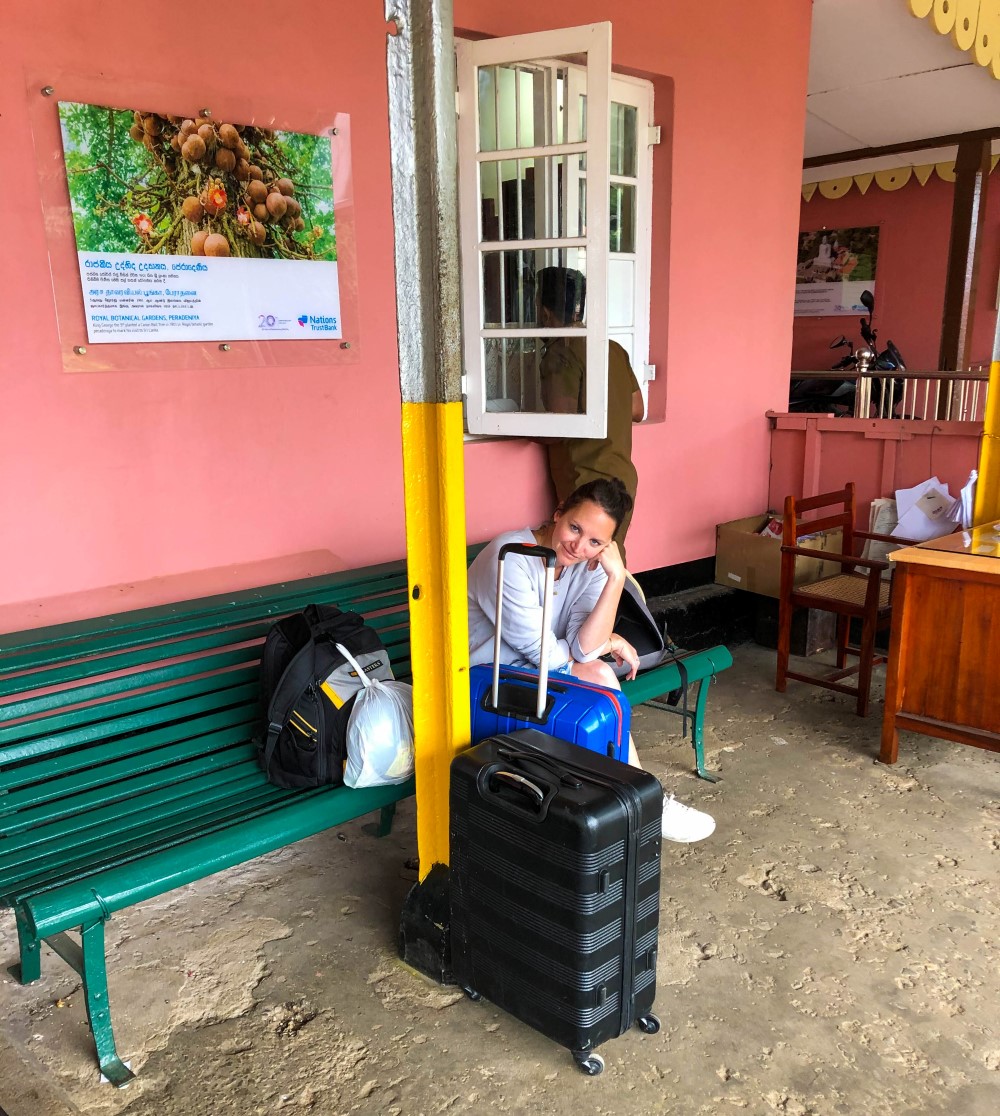 We had an hour to snack and strategise before our last chance showed up. All other trains after this one would arrive in Ella after dark, meaning we would miss the most scenic part of the trip, so whatever happened, this was our shot.

Standing on the platform as the blue carriages flashed past us once again, I felt like I used to feel before swimming galas or gymnastics competitions. We had been up at 6am. It was now after 11am, and we still had a six-hour journey ahead of us, at best, but I was ready this time.

Joe headed in one direction while I headed in another, managing to be first at the rear door of the second-class compartment. I stood to the left as people climbed out the door on the right, leaning the wheels of my suitcase on the one side of the lip of the doorway. To be safe.

A blonde European woman with a yoga mat strapped to her backpack stood to the right, appalled at my behaviour. She waved her hands, indicating I should remove my bag immediately, before holding the arm of an elderly Sri Lankan lady to help her down onto the platform.

While there was plenty space for people to get off, and I wasn’t about to charge onto the train until they had disembarked, I still felt like a complete asshole. Especially when we got onto the train to find several seats already available (two of which I quickly sat across).

“You don’t understand!” I wanted to say, as she slid serenely onto a seat and watched me struggling to post my heavy wheely suitcase onto the overhead luggage rack. “The other train wasn’t like this! I am not a suitcase-in-the-doorway kind of person… Sometimes I do yoga!”

I looked for Joe’s face in a still-crowded train, now full of standing people, and spotted him in the next carriage.

This was repeated several times before we lost sight of one another. I waited for a few moments before deciding to relinquish my shame-seats and go and find Joe, and his seats. Leaving my suitcase where it was, I threaded my way through the tourists and locals, to find Joe… standing in an aisle. In a carriage with seats facing backwards – a sure-fire way to make me rapidly nauseous.

“Four of these people are getting off at Kandy!” he said, happily.

It was a good thing that I’d eaten those samosas. Although, to be fair, he was guarding all fours seats fiercely and this was a huge improvement on what we were expecting.

Trying hard to tamp down my irritation, I decided to take advantage of the outflow of people at Kandy to go and fetch my suitcase.

As I walked past a prime window seat, facing the right direction, its occupants miraculously stood up. I couldn’t believe my luck and darted into them. Seeing this unfold, Joe hurtled through the carriage and sat down next to me.

It was all we said, as the train pulled out the station. 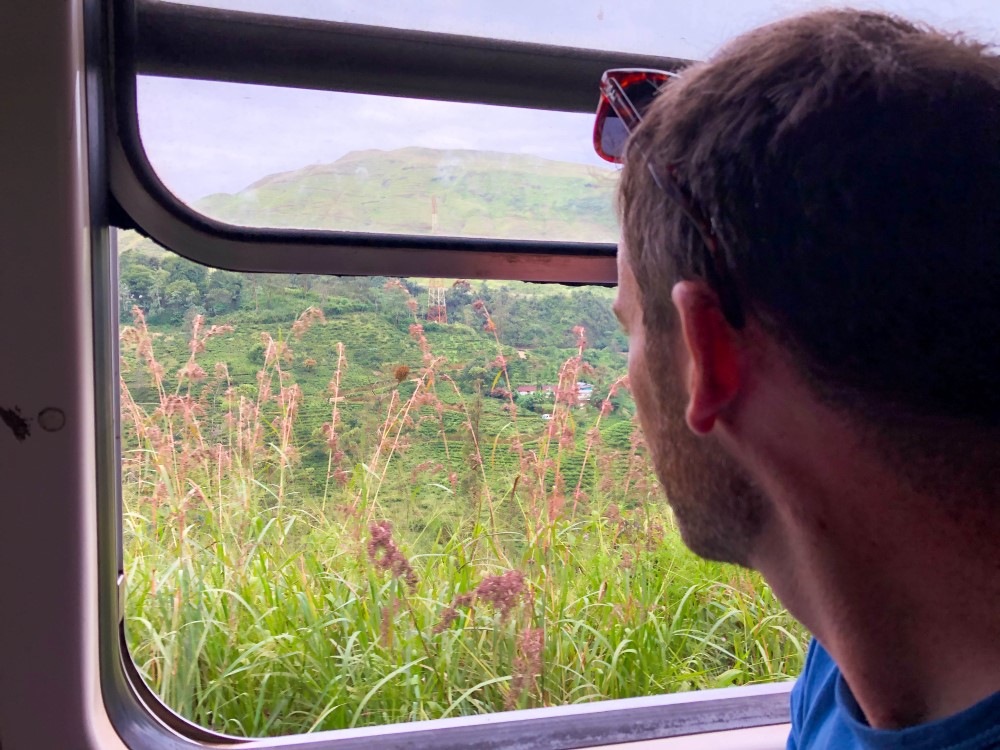 The next little while was spent retrieving bags from various carriages, avoiding eye contact with yoga-lady as I did so, and reeling at the fact that this train now not only had zero people standing in our compartment, but an actual free seat across the aisle from me. We felt almost deceived.

As the train sped past lush, green landscapes, a girl waving at us as she stood with her dog, a boy with a cricket bat raised in salute, emerald terraced tea plantations, and sheer misty drop-offs, we let the tense morning roll off us, and celebrated with a Milo from a vendor making trips down the aisle. 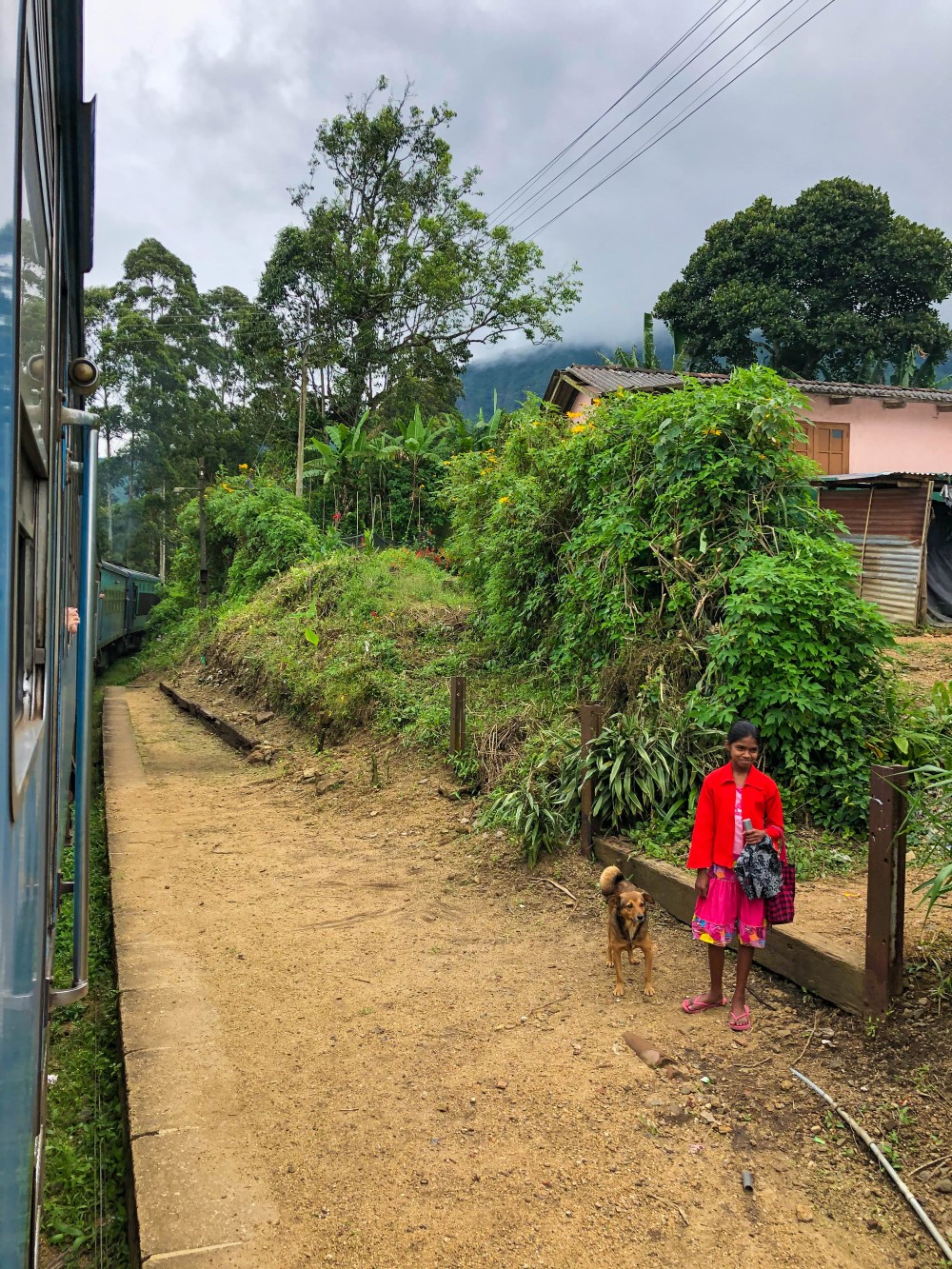 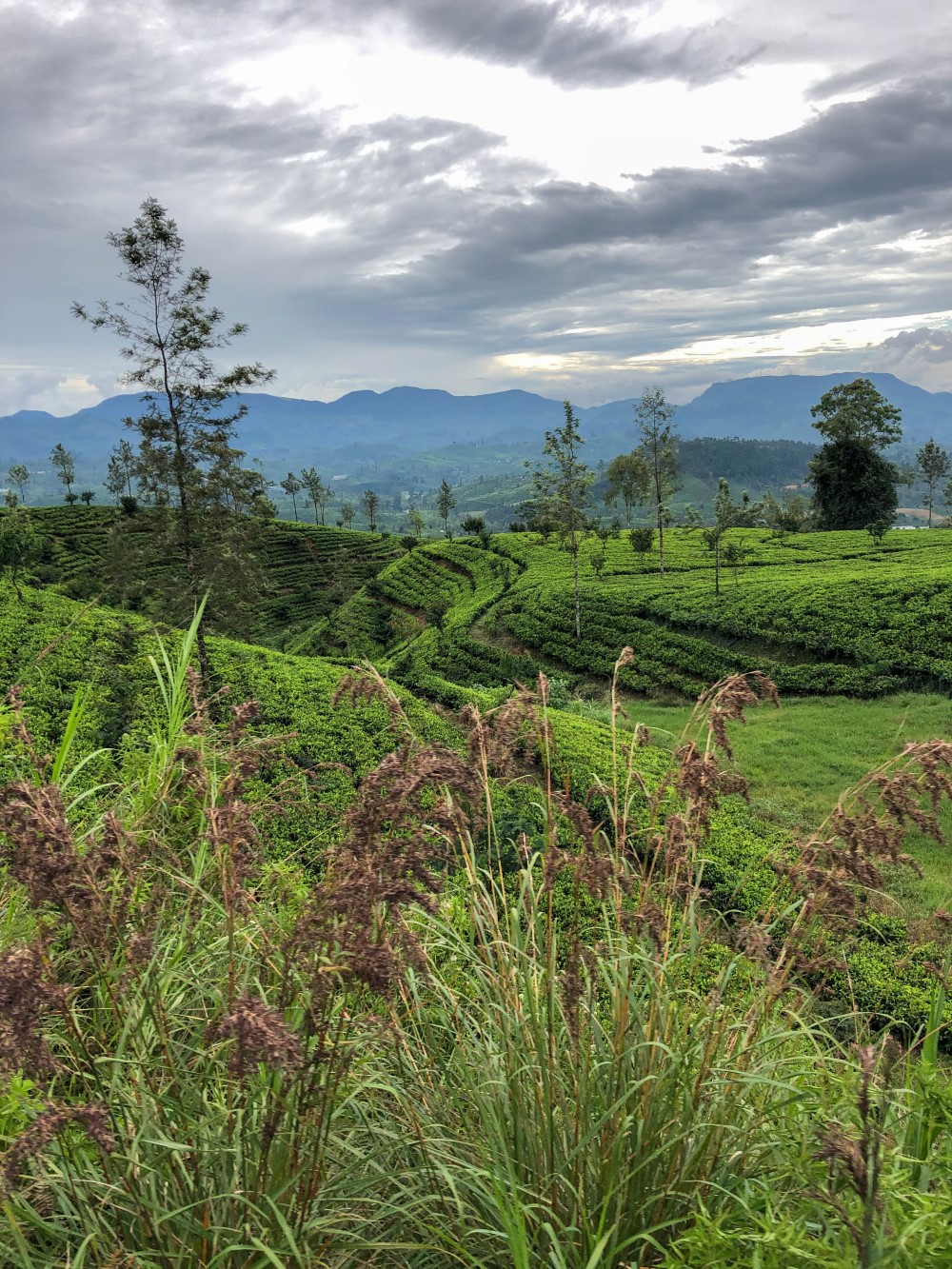 The no-rule approach to seat seizing apparently applies to hanging out the open train doors, which you’re allowed to do as far and as often as you like. It was my favourite place to stand, nothing between you and the air whooshing past your body, hanging onto the handles while keeping a foot wedged under the door, which wanted to swing shut and “skop you out”, as Joe phrased it. 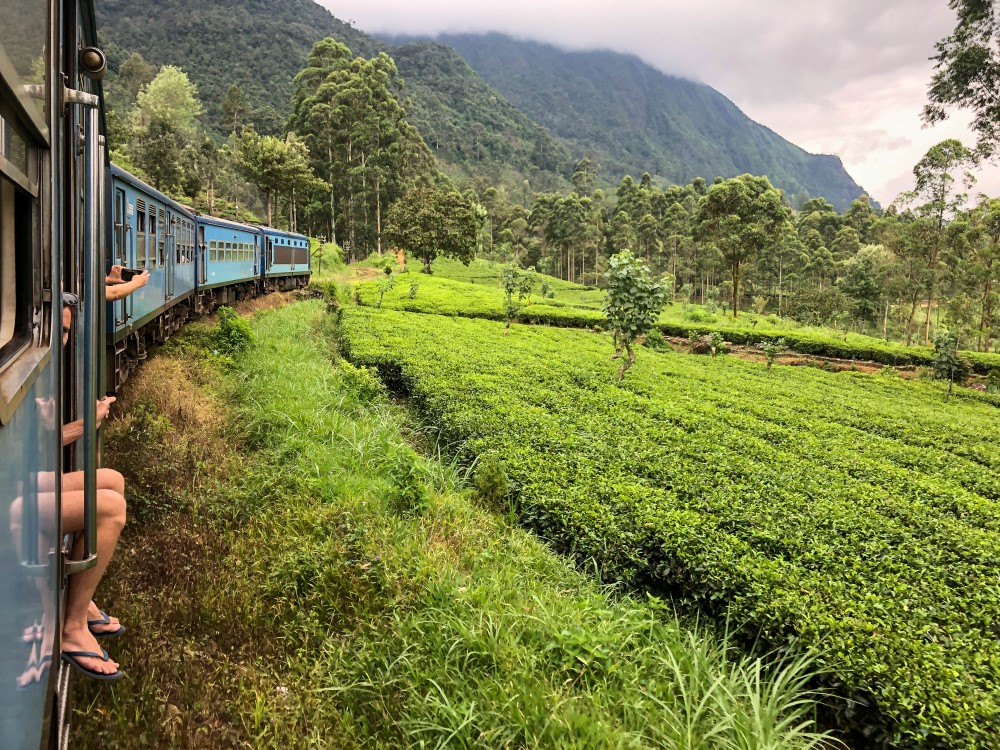 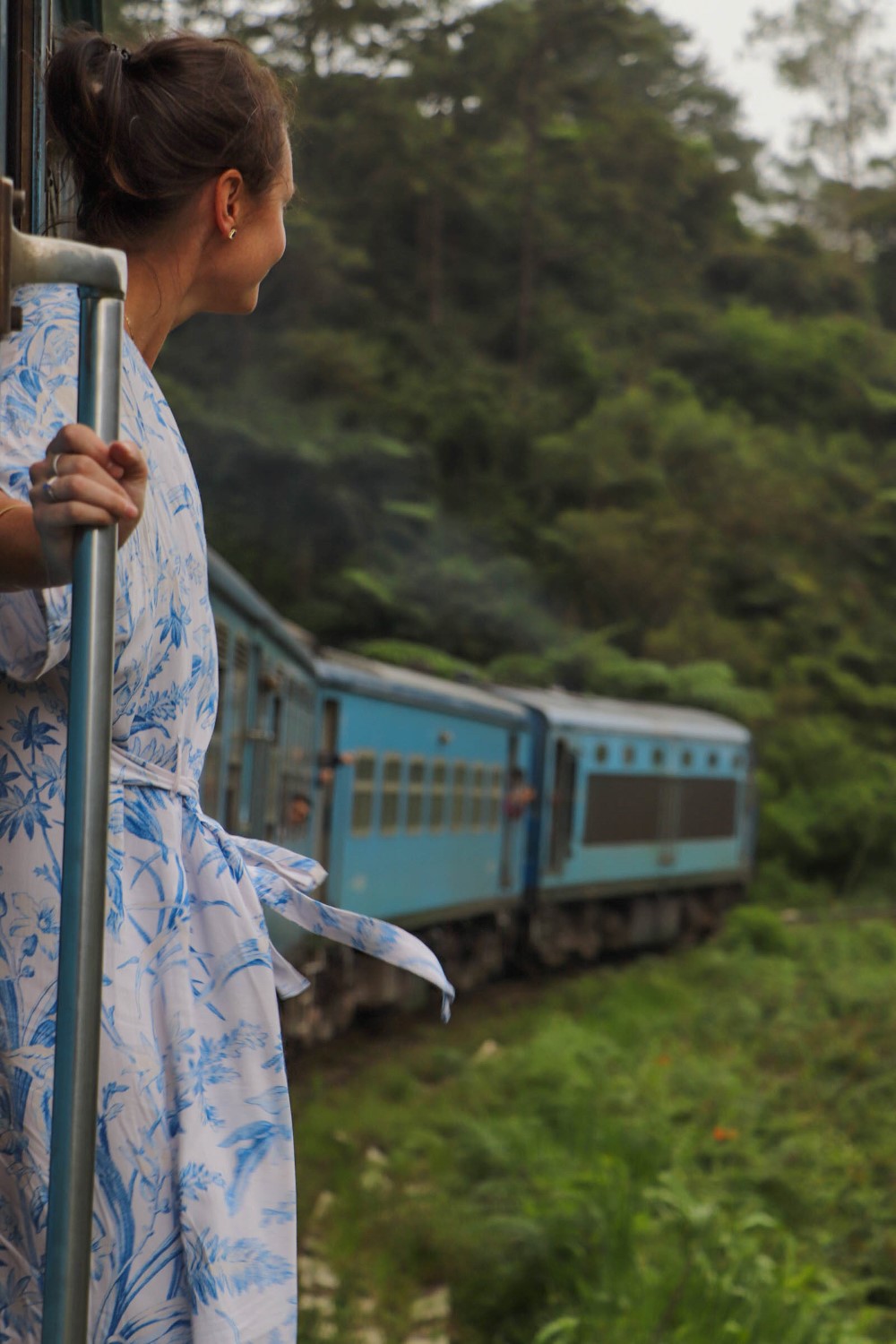 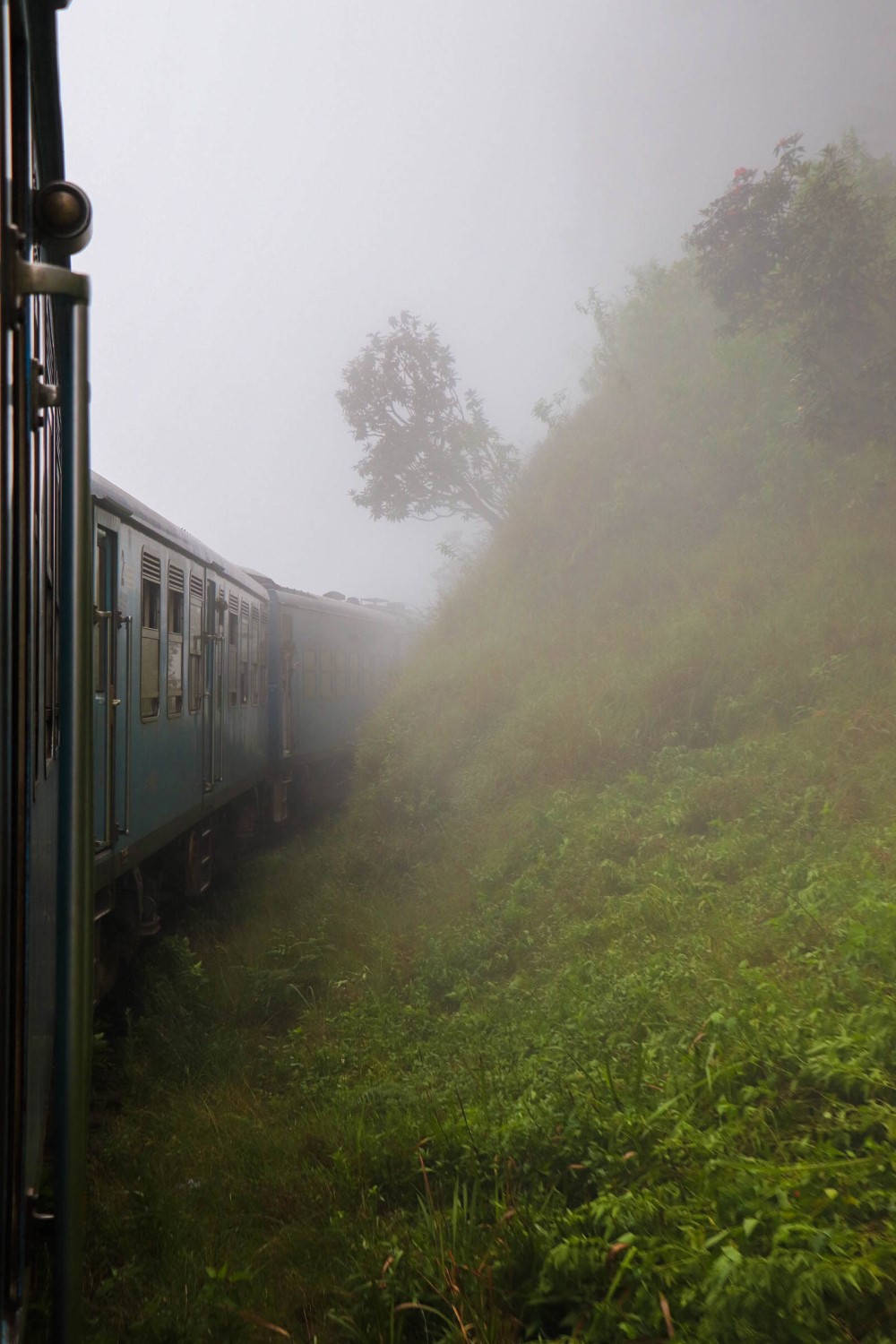 The passing scenery was breathtaking, and the six hours went by surprisingly quickly. At one point, as we rounded a misty corner to reveal a dramatic valley, the whole carriage of people gasped and stood up to peer out the windows.

When we stopped with a jolt at Ella station, I was ready to get off, wash my hands, and have a cup of tea (the most glorious welcome drink I have ever had), but not without a swell of gratitude that we’d experienced this journey (with a seat), and a nod to the yoga lady as we headed out the doors into the drizzly dusk.