The treehouse at Luara Wildlife

When you really need to escape from city life for a while, is there anywhere better than a treehouse in the bush?

Over the December holidays of 2018, Joe and I had been working pretty hard on our house. We had laid our own parquet flooring – an activity which took us months over weekends – and then sanded it during the Christmas break. And when I say we, I mean Joe had been sanding for a solid 48 hours straight, and I… well I had been around a lot of dust. I had also managed to pinch a nerve in my back. While sitting down. Reading.

We both really needed a break.

So, after a morning of intense vacuuming, including the walls and the ceiling, my very lovely sister, who had helped us with this task (arriving with chai lattes no less), sent us off to the clean air of Luara Wildlife in Thabazimbi, a three-hour drive from Joburg. 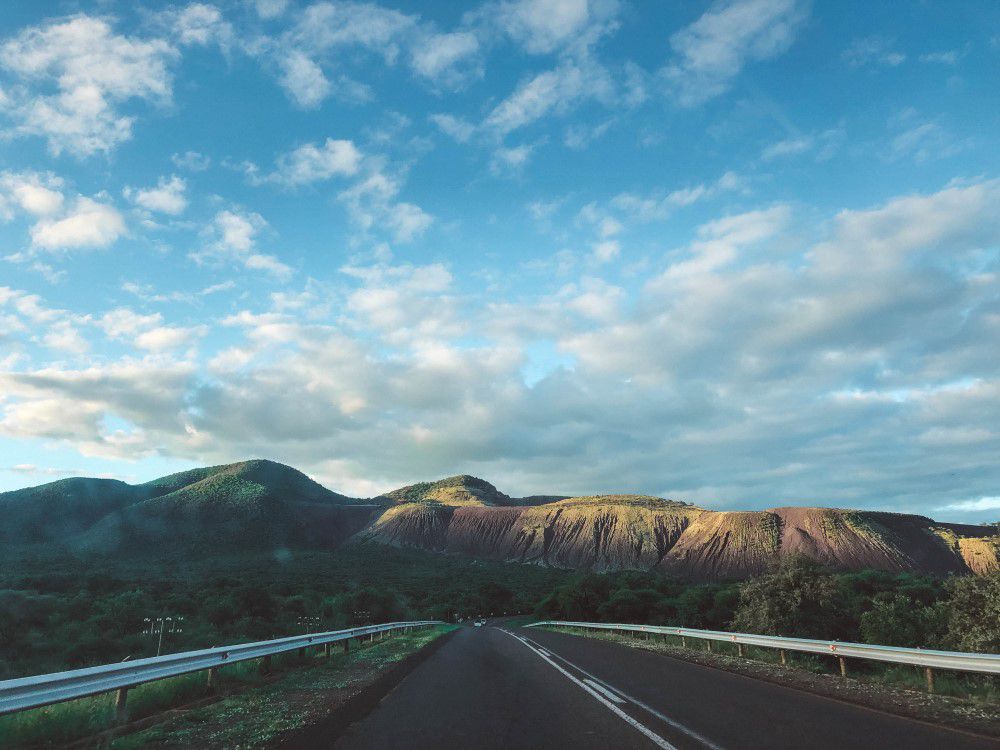 (Quick note: It was a lazy weekend – all photos are iPhone pics)

Even though I knew I shouldn’t, I had formed a very dreamy picture of this treehouse accommodation in my mind, and as we drove through the game farm, past herds of wildebeest at sunset, I tried to lower my expectations – just in case. 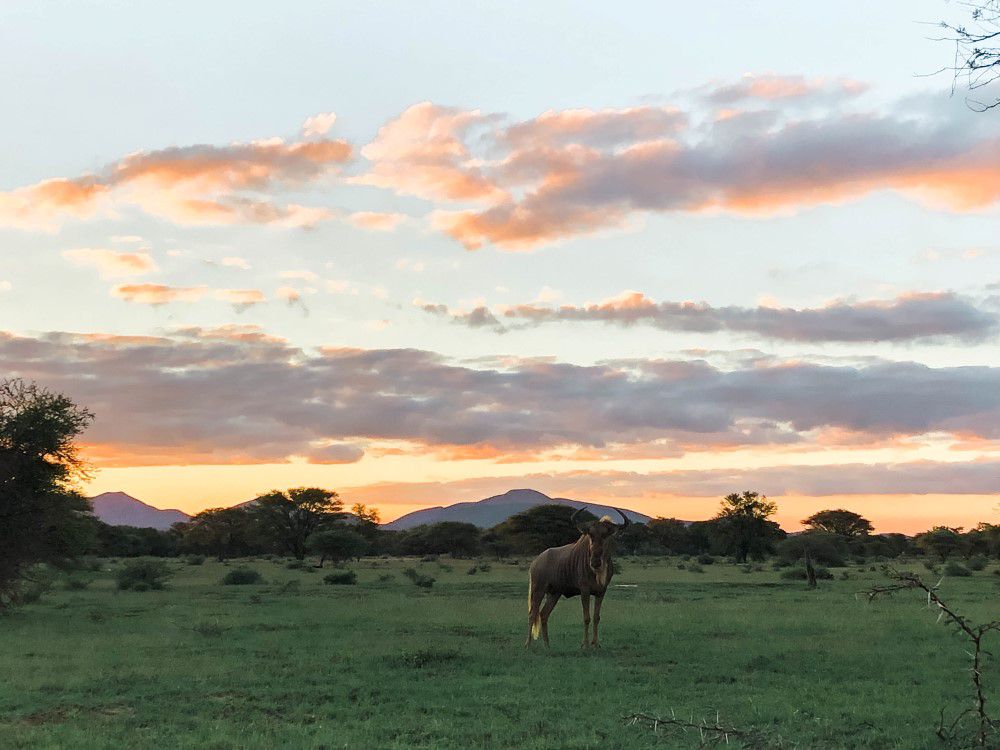 I needn’t have bothered.

Welcoming but secluded, it felt like the sort of romantic hideaway an adult Peter Pan (with strong remnants of boyish charm) would have designed to impress his Tinder dates. You know, the ones with potential.

As we started a fire and sat listening to the night-time sounds of frogs and insects, I felt my whole body exhale. There’s a very particular type of peace that envelops you as you arrive in the bush, a unique sort of letting go that is never quite the same at the sea or in the mountains. 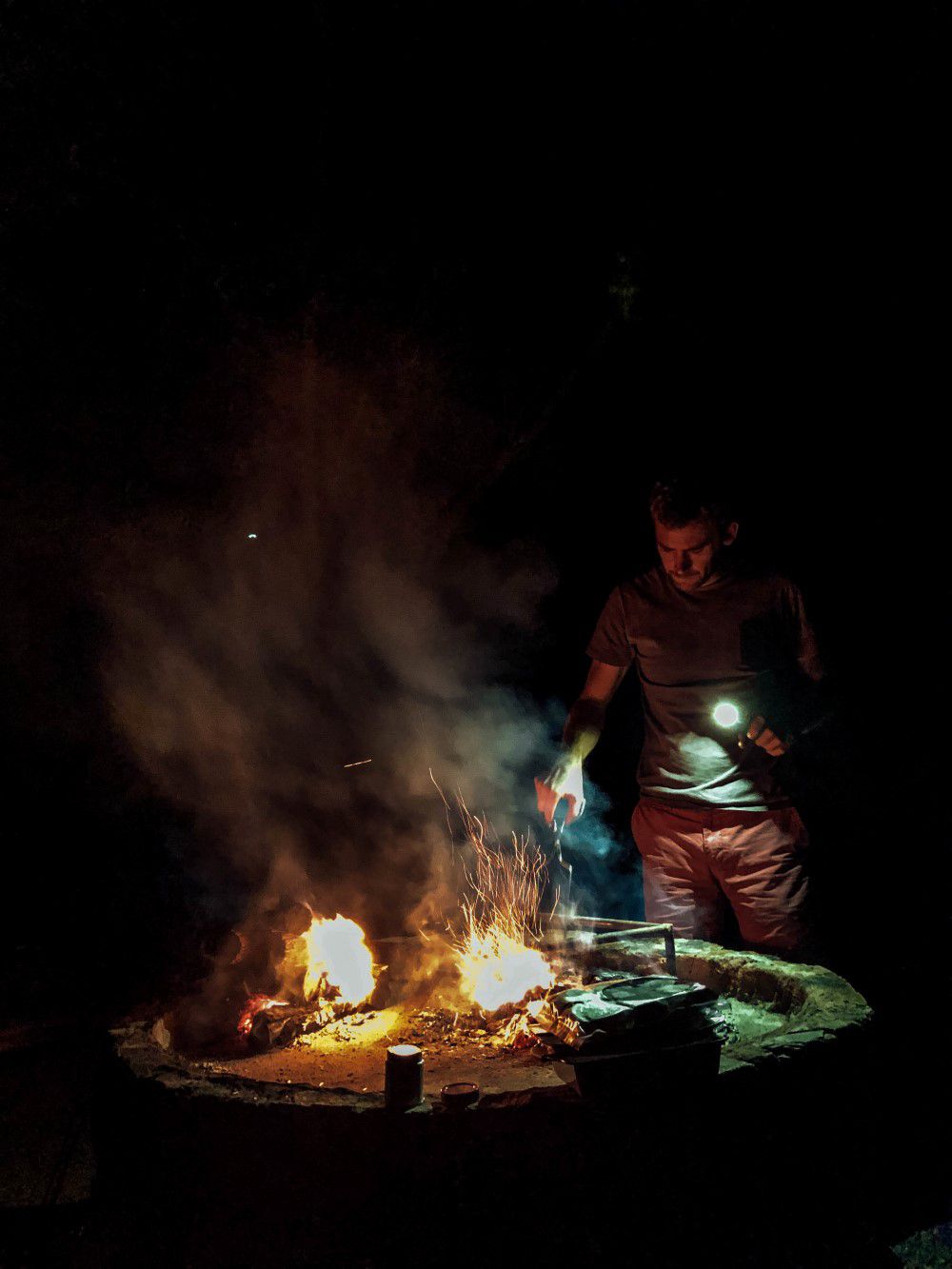 I woke early the next morning and lay there, listening to the birds – the soundtrack of an exuberant book club where the book takes a backseat to the lives being dissected – watching the early light paint the curtains like spilled syrup. 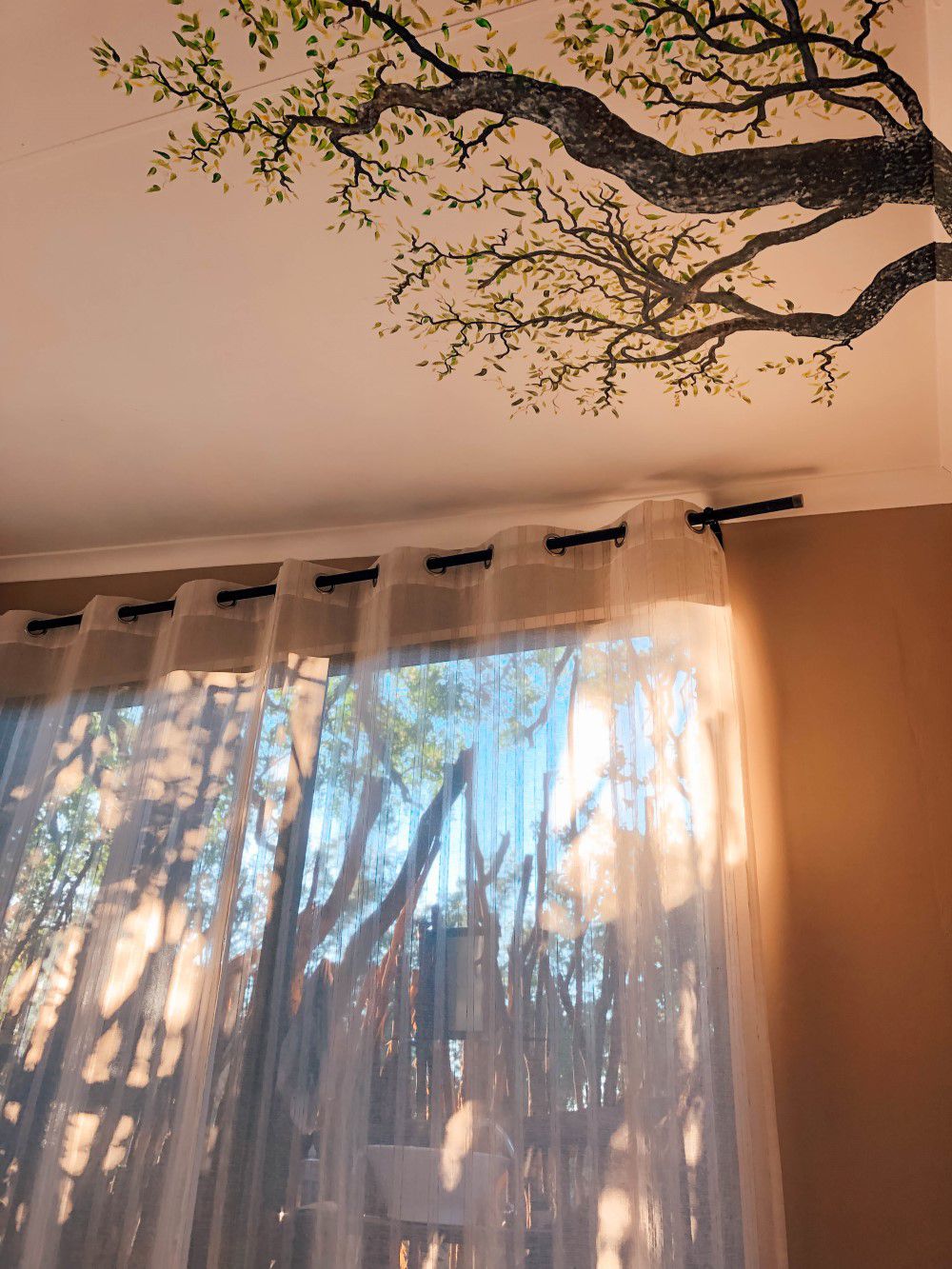 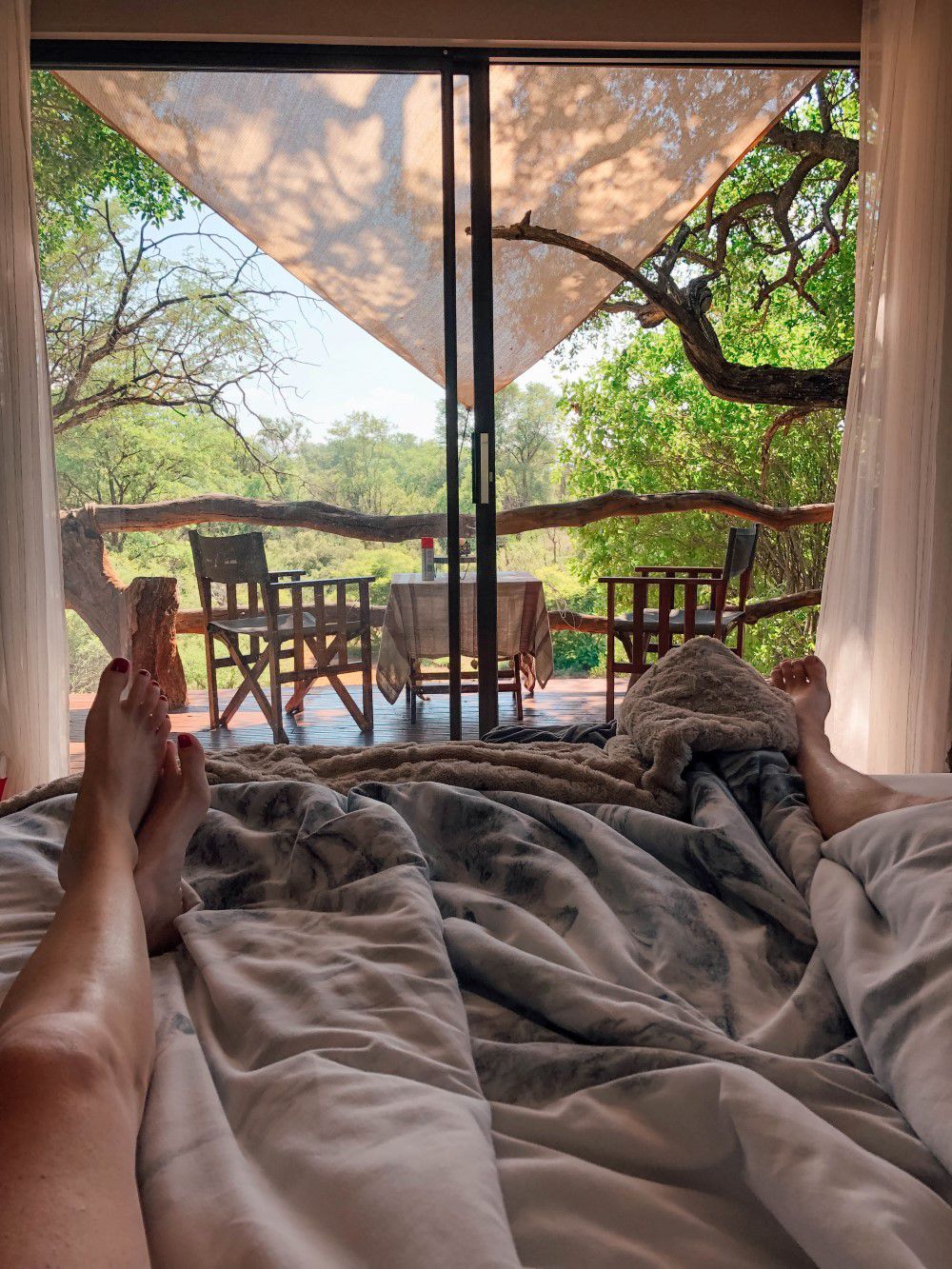 The day passed lazily, and, after meeting the welcoming Ana Paula, who created this magical place (warm and friendly with an easygoing European glamour, quite unlike Peter Pan), we decided to take her up on her suggestion of going for a game drive around the farm. We asked about what we might see, and hoped it would include the giraffe that she sometimes came across on her morning walks.

Some of the roads might be muddy, she warned, as they’d had quite a bit of rain lately, but we were no strangers to driving rugged terrain in city cars.

On our very first weekend away together, Joe drove my little VW Polo on a 4×4 track of soft beach sand – remarkably skillfully – so we could get to an incredible, out-of-the-way beach. It was not unattractive.

We headed off and were pleasantly surprised at the variety of game we saw – wildebeest, sable, nyala, buffalo, bush buck.

Each wide puddle we encountered Joe handled beautifully, and I started to really enjoy myself, confidence building with each roadblock we cleared.

Which was why, when we came across a particularly large one that extended for quite a distance, I encouraged Joe to go for it. He did.

And we soon discovered that while this puddle was long, it was also quite deep. And the i20, soldier that it was, was just not a 4×4.

We sat in amused silence for a while, enjoying the sounds of the bush, and then got out to assess the situation.

With the help of a few logs, which were strategically adjusted after each new attempt to extricate ourselves, we… were still stuck. 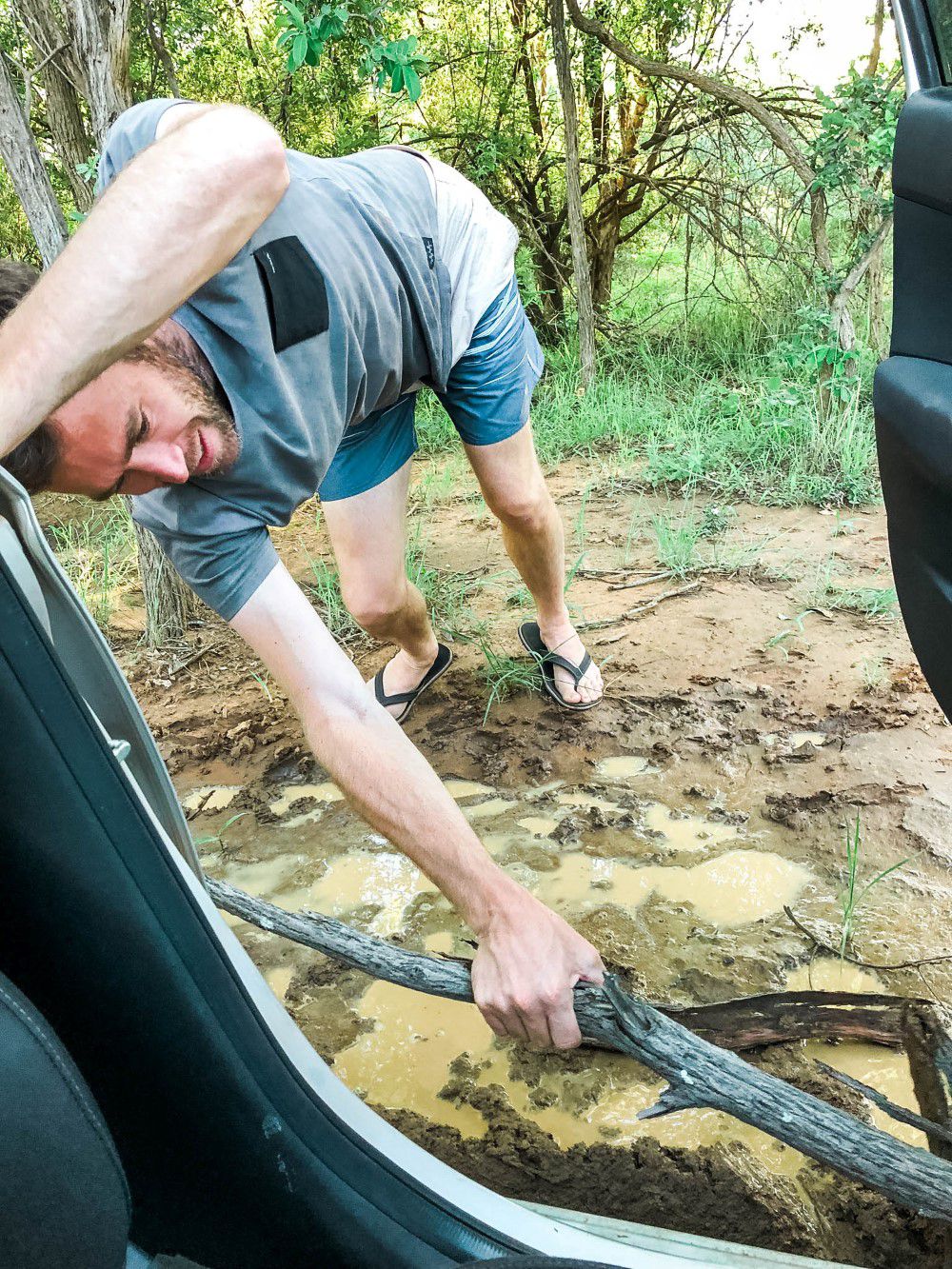 I had embarrassing visions of having to phone Ana Paula to come and tow us out, and we both decided that we would have to have completely exhausted our ingenuity to make that call. Spurred on, Joe constructed a more sophisticated log scaffolding, I removed my weight from the vehicle, and the clever car drove right out of that muddy trough.

In celebration, I was dispatched to check the depth of each subsequent puddle we drove through, and we proceeded with much more caution, and no further incidents. 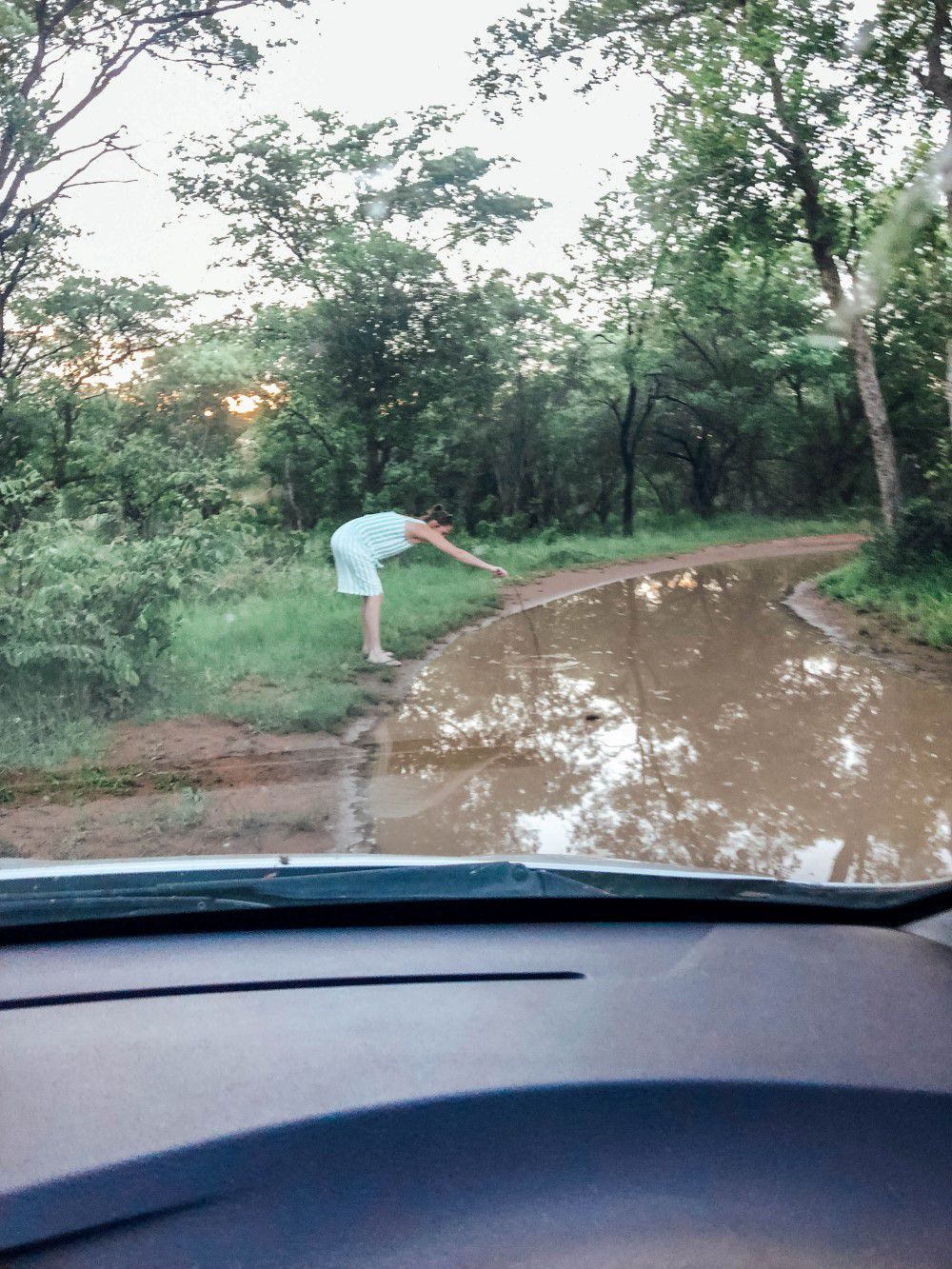 As the sun got lower and lower, and we started to think about heading back, we spotted the family of giraffe. Giraffes are my favourite animal. I love their easy, loping grace. And seeing them in the dusk light felt extra special, knowing that we could still be sitting in the mud in the dark. 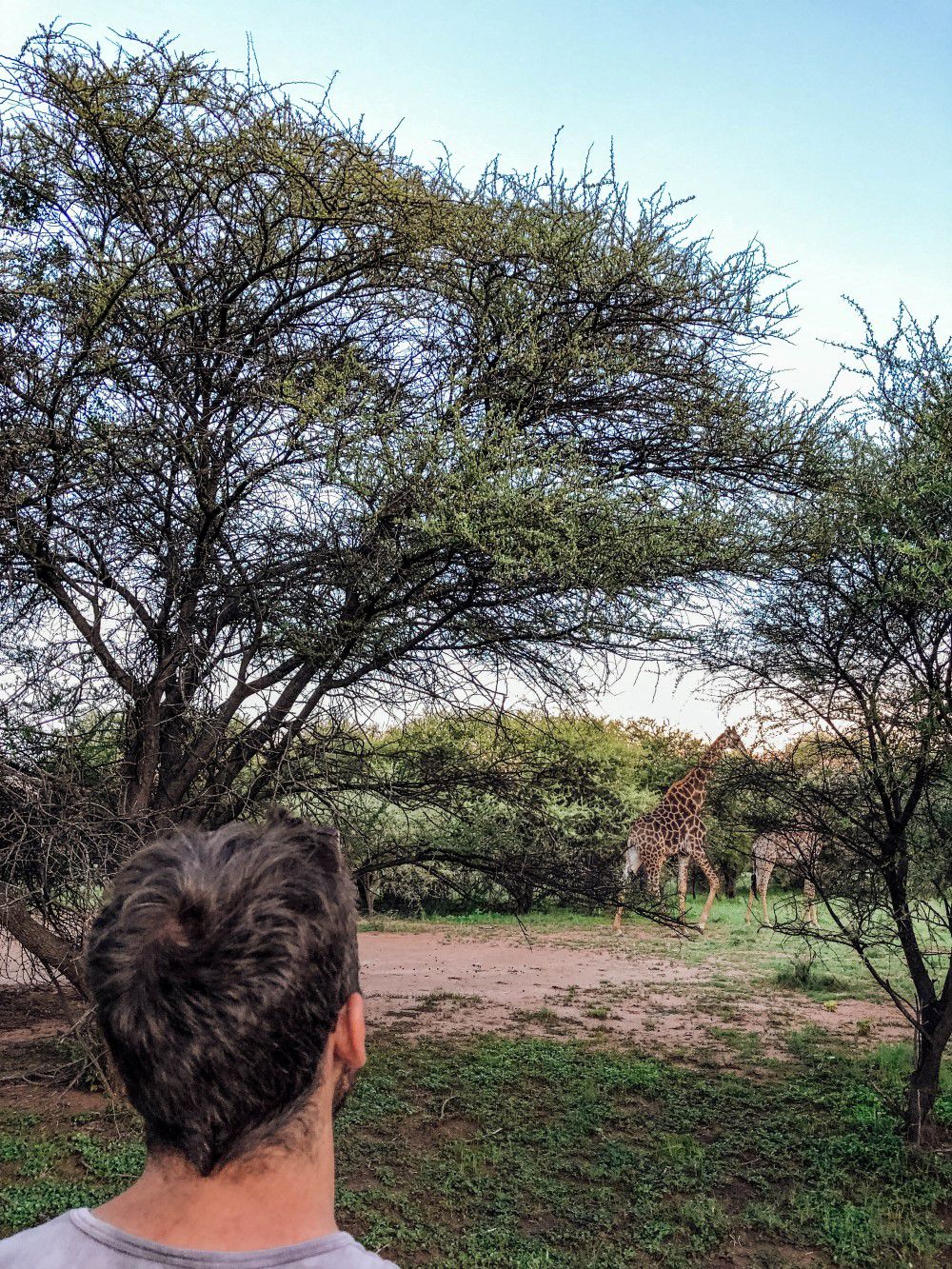 That night, as I showered underneath the stars in the outdoor treehouse bathroom, I thought about how lucky we are to be able to escape our city lives, even for a weekend, at places as magical as Luara. It’s something I will never take for granted. That, and Joe’s driving skills.

You can book your stay at the treehouse or the tented camp at Luara Wildlife here. 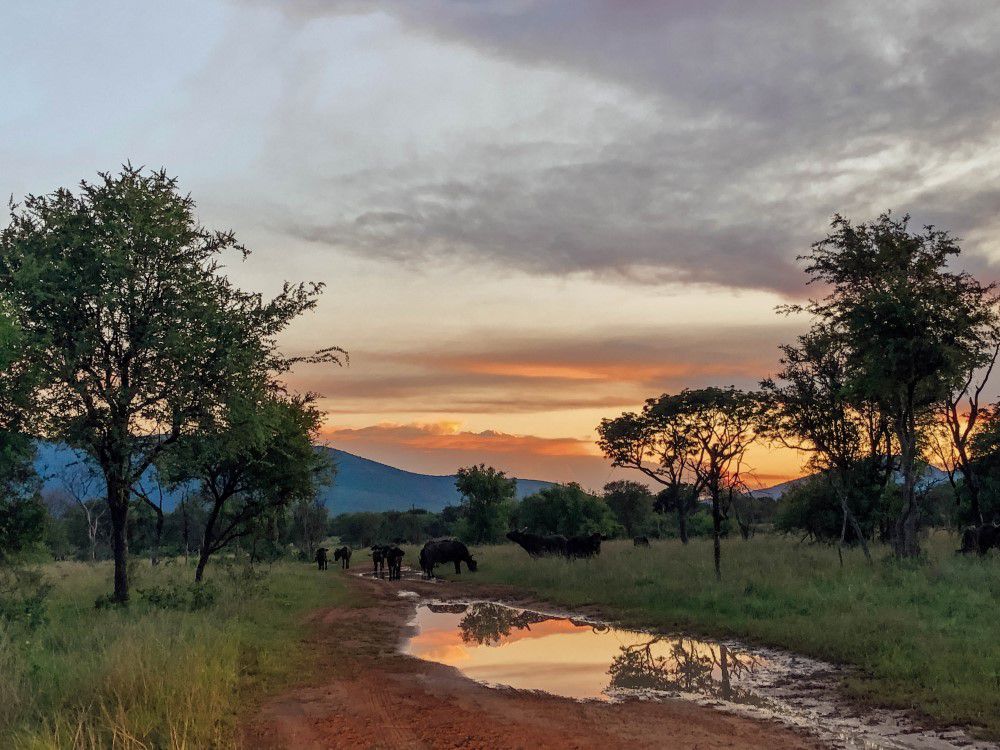 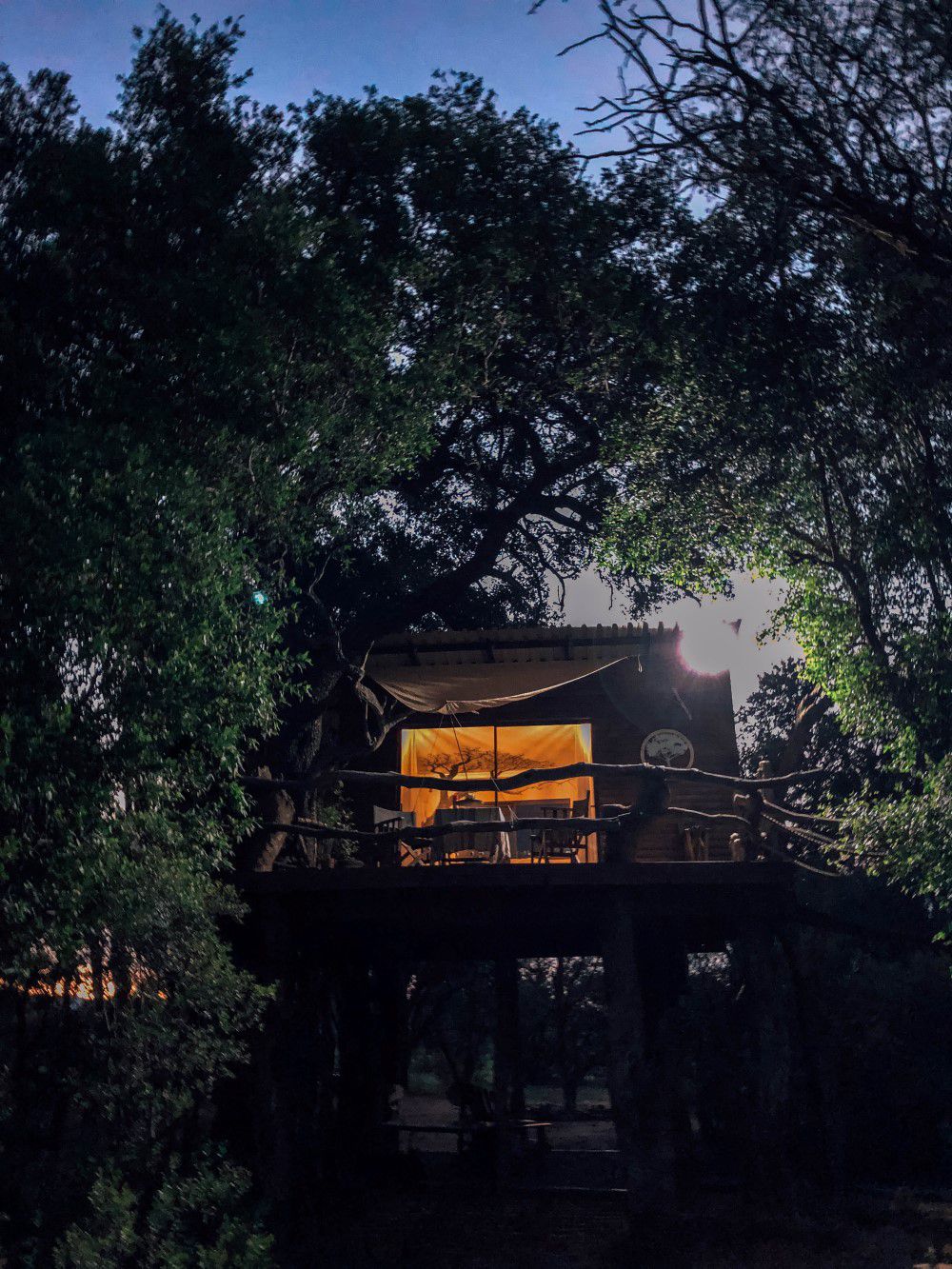 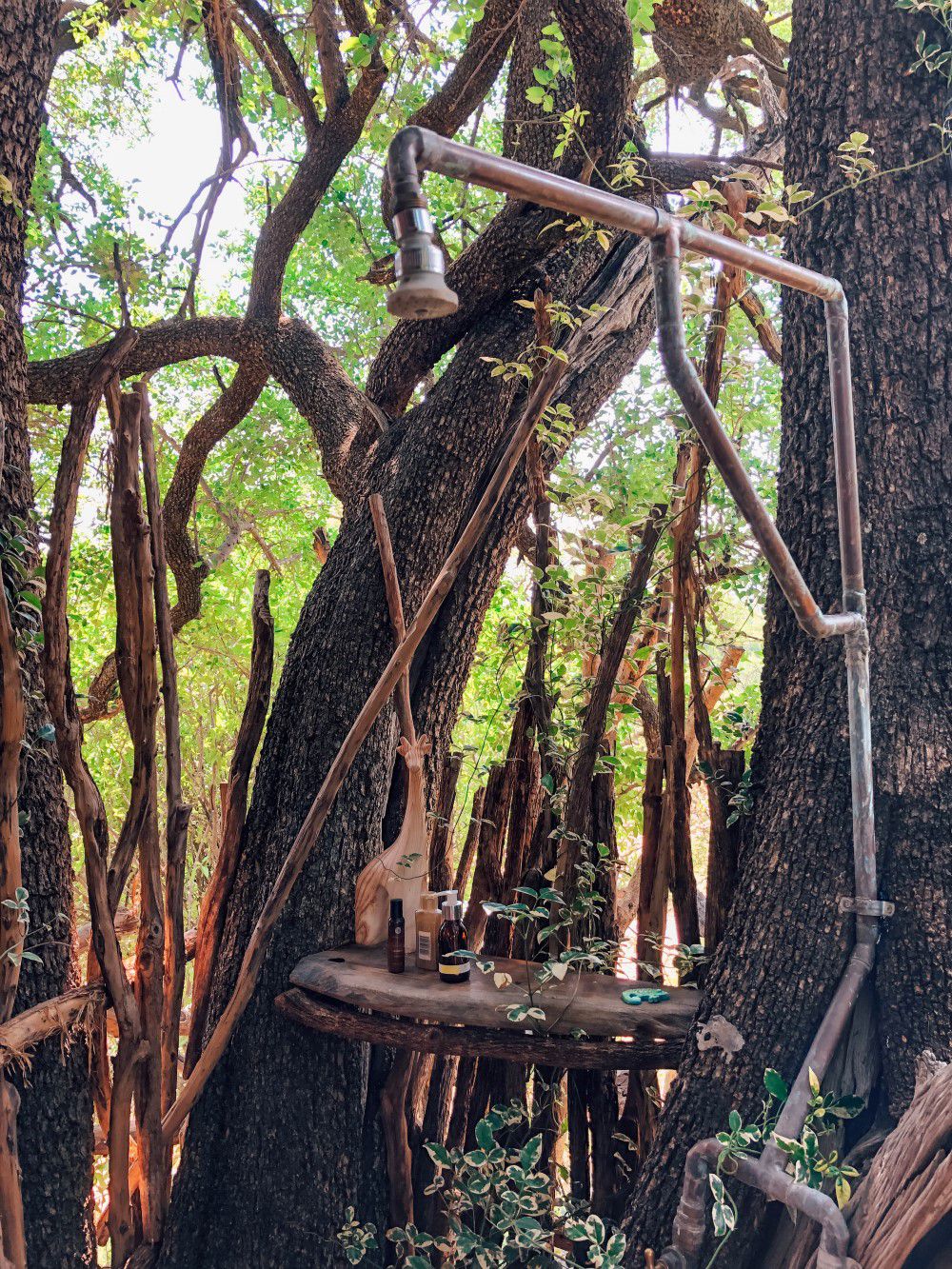 The beautiful outdoor bathroom, high up in the trees 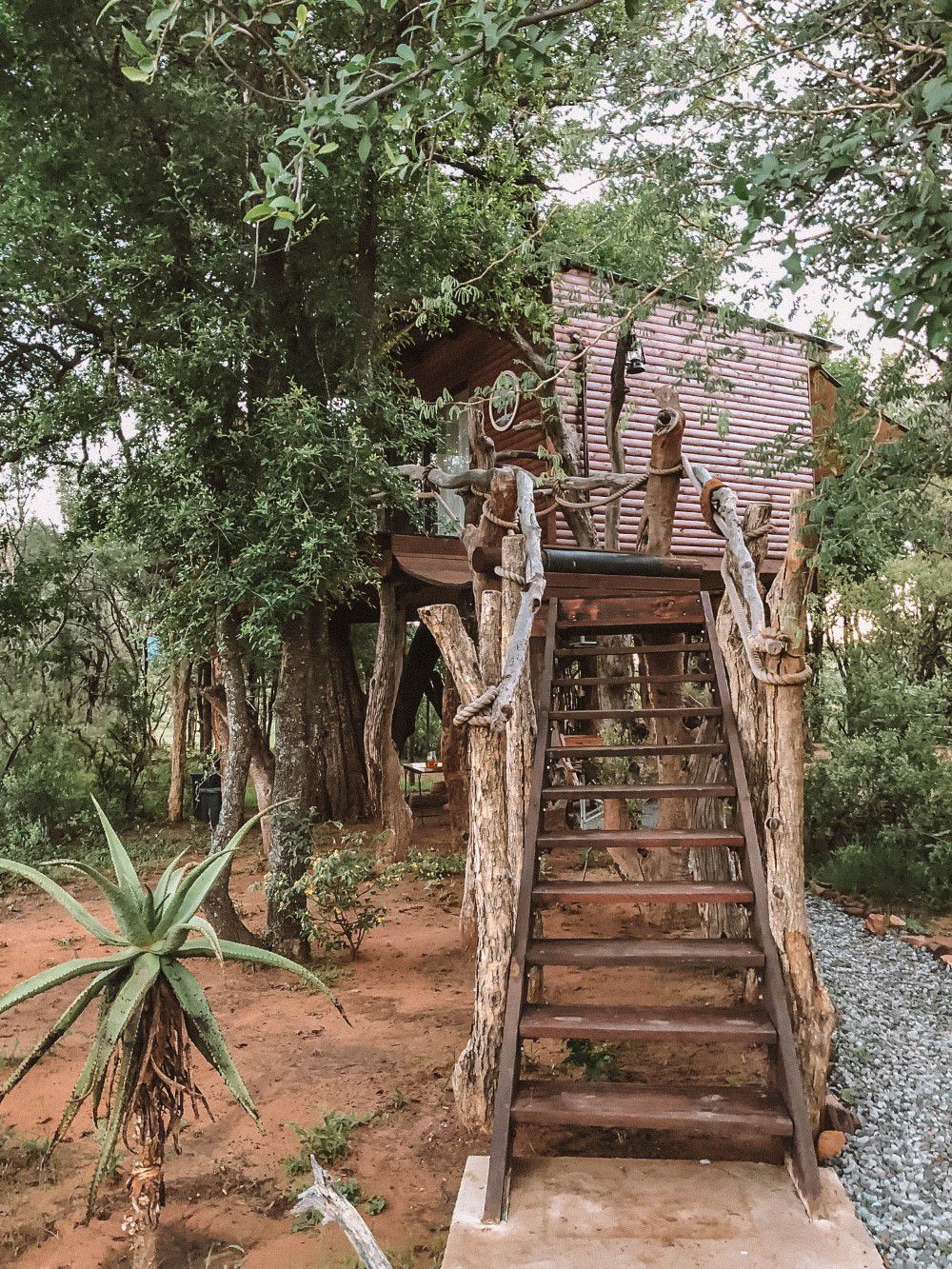 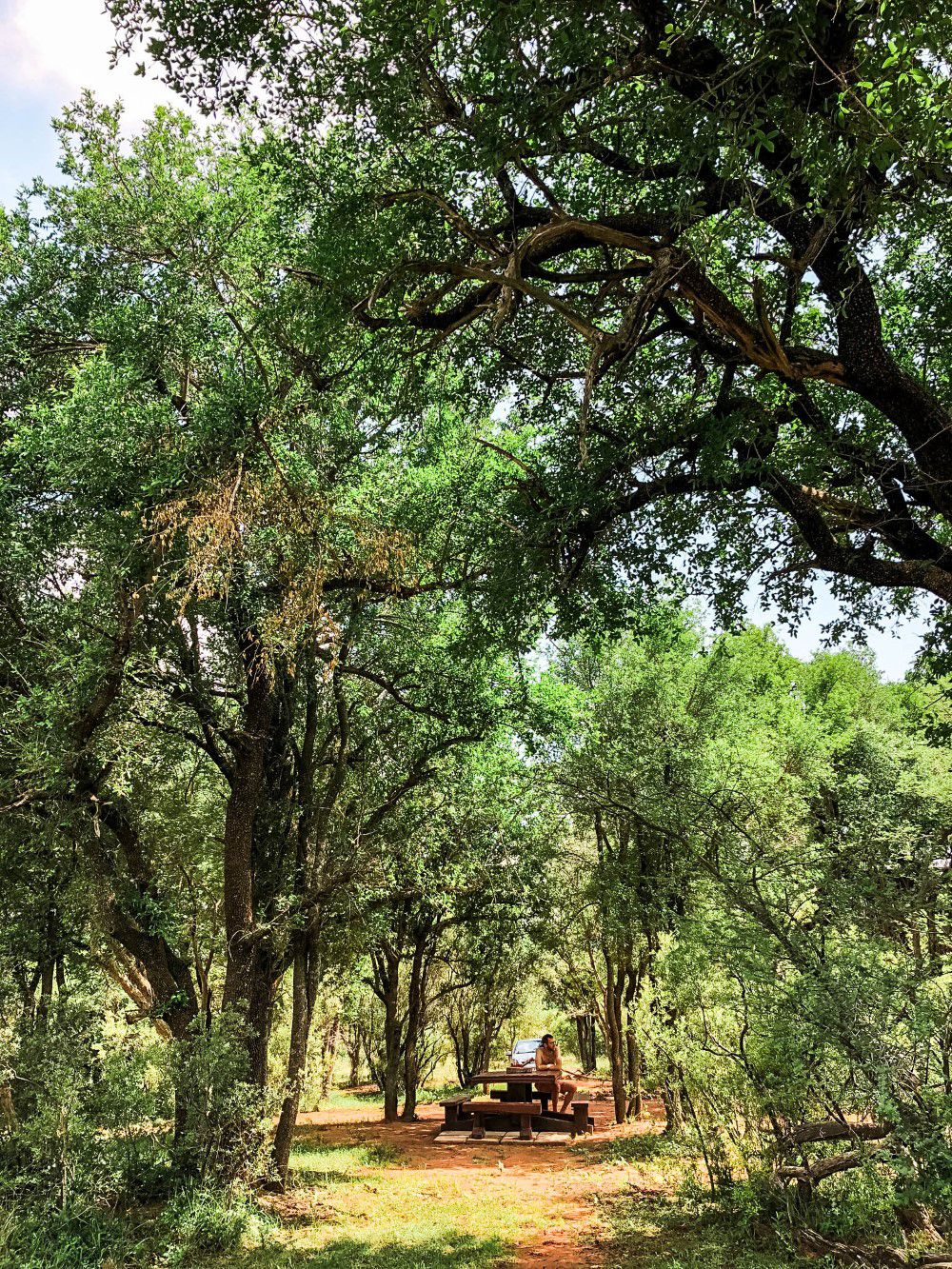 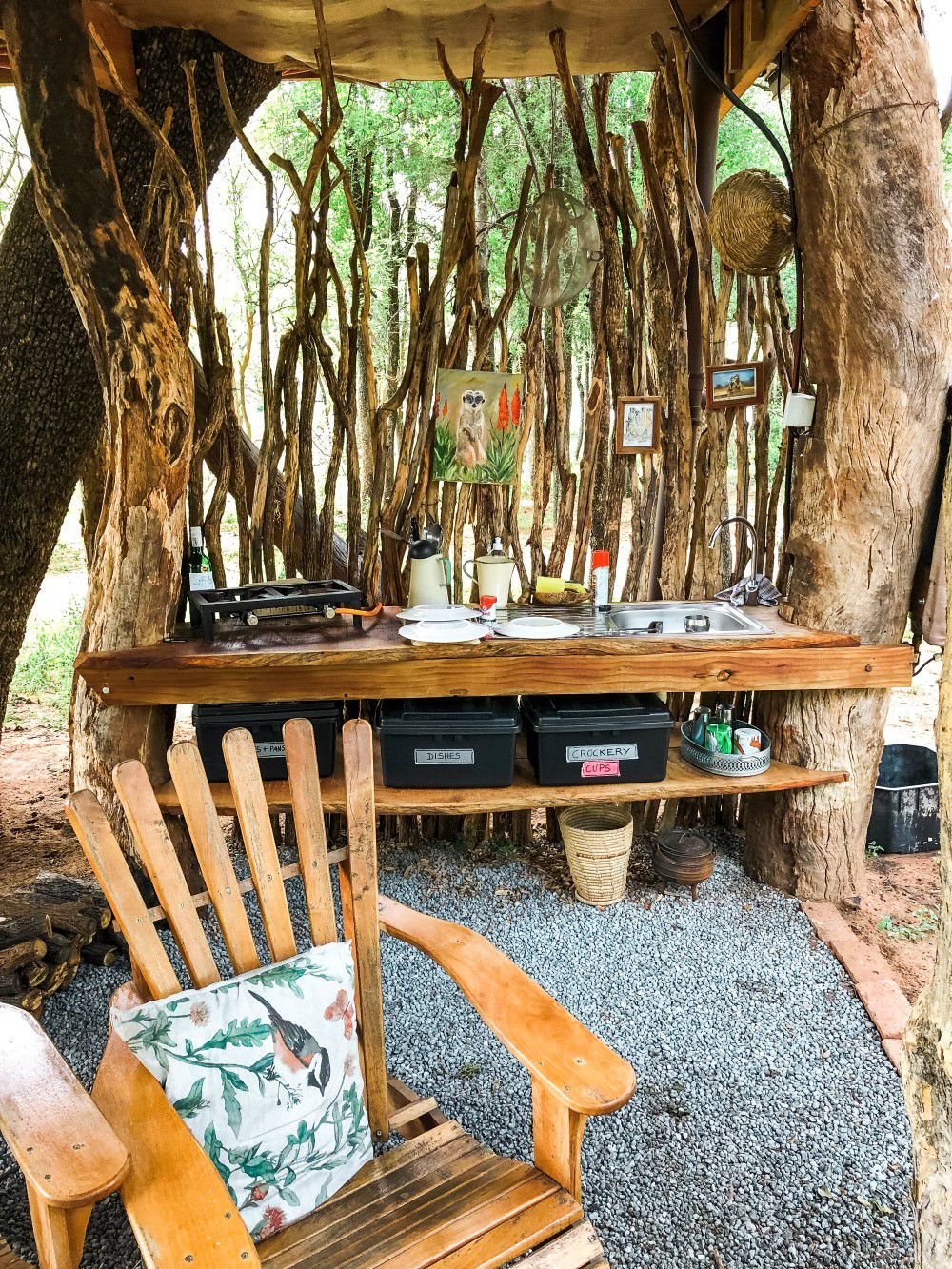 The fully kitted-out kitchen, underneath the treehouse 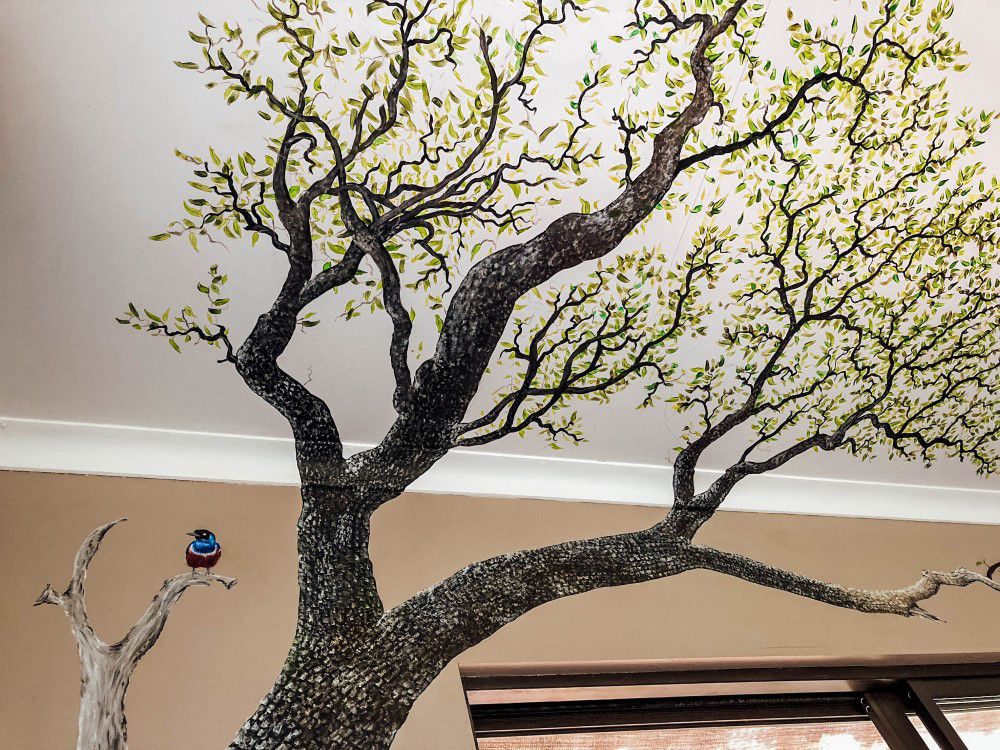 One of the beautiful painting inside the treehouse. There are also little meerkat footprints on the floor. 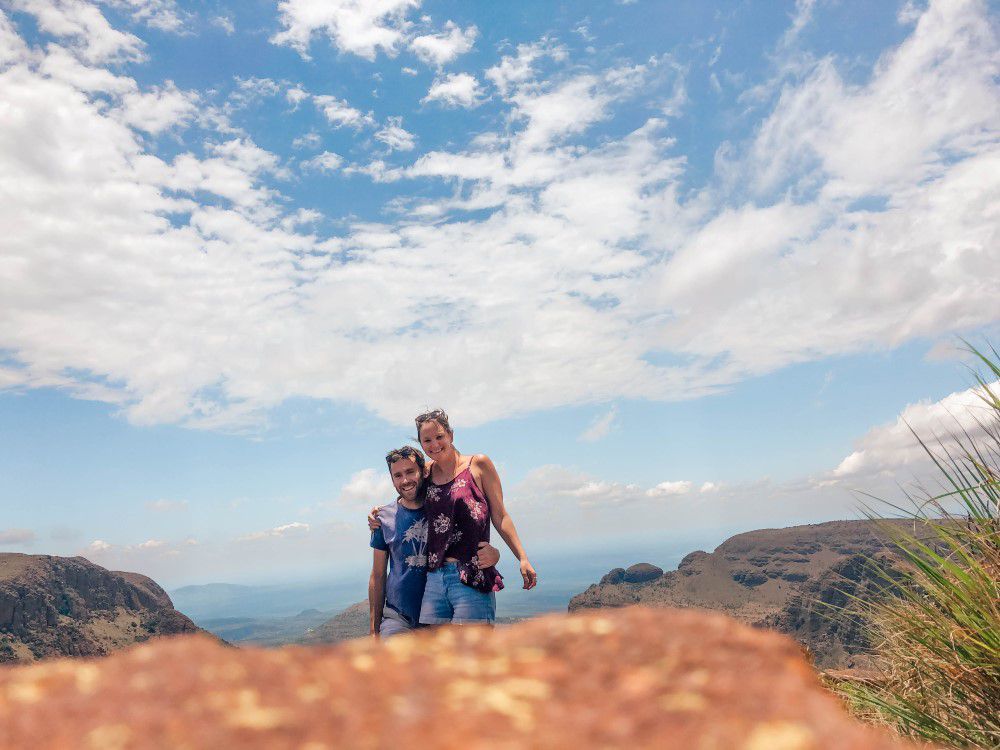 We went for a drive in Marakele National Park on the way home. We are very good at self-timer pics. 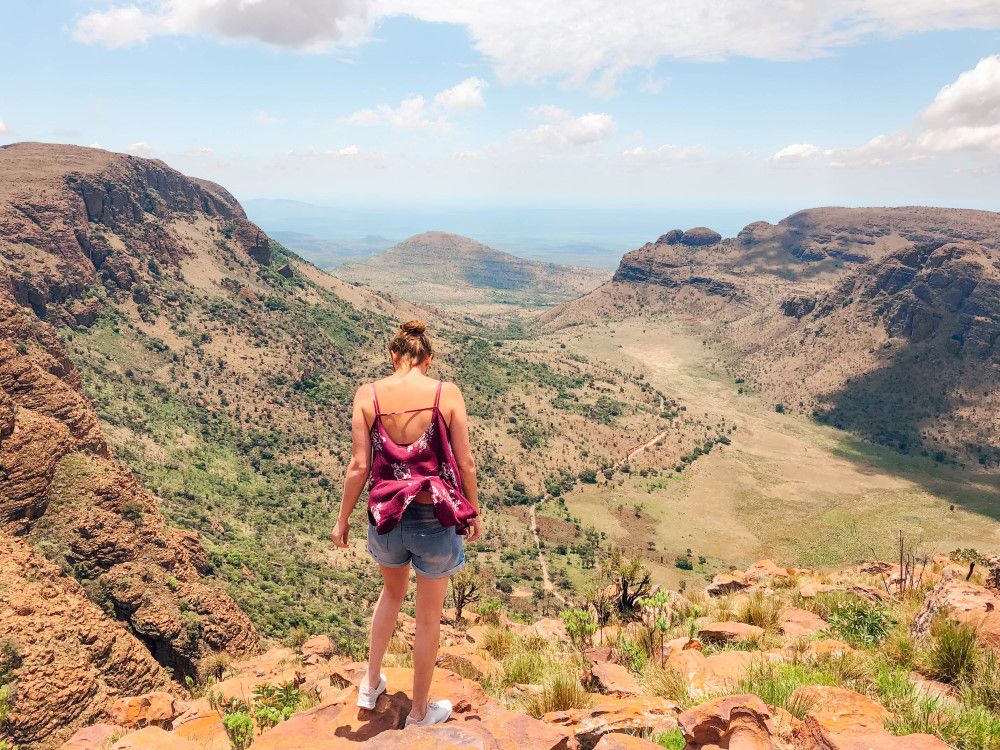